Since Pinball FX 2 arrived on Steam, Zen Studios has been slowly but surely bringing over their existing tables and fan favorites. But this week is the first time since the PC release, that Zen is releasing an original table pack for the multiple platforms; taking us away from the Marvel Universe back to a galaxy far, far, away.

(This is the first time I’m reviewing pinball tables and I don’t know the terminology behind the various parts of a table. Feel free to mention in the comments anything that I’ve messed up on)

The Balance of the Force Pack comes with three tables: One based off of Return of the Jedi and two original tables of Darth Vader and Starfighter Assault.

Let’s start with Return of the Jedi as it follows the same style as Zen’s previous table based off of Empire Strikes Back. As before, missions take the form of famous scenes from the movie such as the final light saber battle.

Thematically, I enjoyed the table but for me, it was the most frustrating of the three to play. The left drain was hard to avoid and tilting had no affect on it. Instead of having a kickback, you had to hit enough buttons in a little section to score a ball save. Meanwhile the right drain was far more tilt friendly and nine times out of ten, I could save myself with a simple push.

The bumpers in the center of the table were extra strong and usually knocked the ball over to one of the drains. The other annoying issue was the mission hole that is above the main flippers. Getting the ball in the hole would then launch the ball out of it at varying speeds. If you’re not careful you can easily send the ball down the middle or one of the side drains. 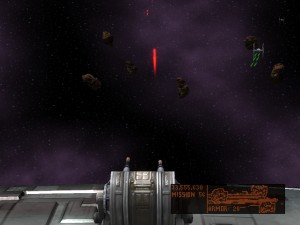 The Starfighter table features several bonus shooting sections, but controlling them was a little iffy.

The second table: Darth Vader is a greatest hits of the Sith Lord’s exploits, even starting with an optional challenge of assembling Vader from the end of episode 3.

However, the table’s color scheme of various shades of red and grey can make it a bit tricky to see where you need to shoot the ball. The missions themselves seem to be on the harder side, made up of multiple parts and specific shots.

One annoyance in design is that there is a loop on the right side that launches the ball at the center drain, similar to one of the shots on the Marvel Civil War table, which can lead to cheap ball outs.

Lastly there is the Starfighter table, based around the general conflict between the Rebels and Empire. Like the Marvel Civil War table, at the start you’ll choose your side which determines where the ball will start from and gives a bit of a theme to the missions. Out of the three tables featured, this one is the largest in terms of size. 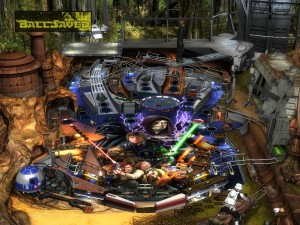 If you can see it, the drain on the left hand side is positioned differently than the right and is easier to fall through.

The extra size also means extra modes. And with so many bonus modes, there were times where I was running two or three at once. On the other hand, it became a little hard to follow all the different modes.

The table also features an upgrading system seen from the Blade table and a few others. But at the time of playing the pack, there were no explanations as to what the different upgrades did.

Another annoyance are the bonus sections where you may pilot a ship or man the turrets. Using flipper and launch controls for movement and shooting felt awkward to me.

As before, Zen has done a good job with translating the theme of their chosen IP to pinball form. I enjoyed the Darth Vader and Starfighter tables the most, but found the drains on Return of the Jedi quickly made the table annoying.

With the recent announcement that Zen will be returning to the Marvel Universe with a Doctor Strange table planned for December, I do hope that we will see them stretch their creative pinball muscle with other IPs or original tables soon.