Mousechief, headed by designer Keith Nemitz is no stranger to creating unique game experiences. His previous game: Dangerous High School Girls In trouble combined board games with running a girl gang in the 1920s. And his newest game 7 Grand Steps: What Ancients Begat looks to continue the trend with what is the current runner for most unique game in 2013.

7 Grand Steps is from the outside a crazy mishmash of concepts and material. You begin the game as a lower class citizen during the early age of man and your mission is to raise not just a family, but an entire lineage that will keep the family name going for all time. Think Civilization meets the game of life as a simple concept. But 7 Grand Steps is anything but simple.

All this by the way, is represented by figures on what appears to be one of those old token arcade machines. The game is all about abstracting living, dying and hopefully improving one’s lot in life.

You’ll begin with two pieces on the field, representing a husband and wife. Each tile on the wheel has a symbol representing a skill of the time: brewing, plowing a field etc. Your tokens on the left side of the board can be used to move a piece forward to that represented symbol. Or you can use the ingot to move a piece backwards and create more skill tokens.

After each turn the wheel turns and moves the pawns to the left, with crocodiles representing failure waiting at the far left end. You have two objectives: have children to continue the family name and to land on tiles with beads that represent “legend points.” 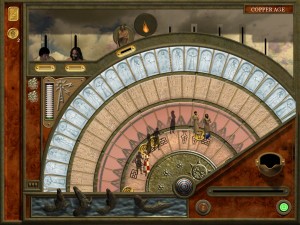 When you start playing you’ll choose from one of three legends that the points will be applied to.

First, is discovering a new invention which will replace one skill on the board and provide you with a lot of tokens. Second is performing a heroic act that can lead to either good or bad things happening to your family.

Lastly and most dramatically: moving up the social class. Each section on the wheel represents a class of living, with the higher classes using different profession tokens and better legend beads.

Accomplish a feat and you’ll then have to choose another to work for. As you move your pieces around on the wheel, having the couple land or interact with each other will give you the chance of having a child. You can educate a child in a profession as long as you have enough profession tokens.

Educating them, will increase the chance of making more of those types of tokens when they reach adulthood. After about 5 to 10 minutes of play, the wheel will come to a dead end signifying your couple has reached the end of their lifespan. You must then choose one of the available children to play as for the next generation.

You must marry the next generation before all potential suitors are taken, or that line of the family tree will end right there signifying a game over. Any additional child you had act as extra chances and allow you to continue that period as them. 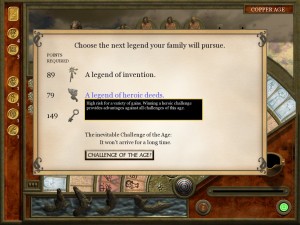 Legends represent major goals for your lineage to work towards and are vital for preserving your name.

While you are doing this, other families will be attempting to do the same, with some becoming allies or rivals for your family as time goes on.

And even with all that said there was still more to discover in 7 Grand Steps.

It’s amazing how the abstraction of gameplay in 7 Grand Steps, in many ways mirrors real life. Having one child allows you to focus your resources on them and makes it easier for them to succeed, but you are putting all your eggs in one basket on the hope that they can continue the line.

When you have a huge family you have more chances that they will continue, but you can’t properly provide for everyone equally. There is even a life lesson that if you aren’t moving forward you run the risk of life slipping away from you.

Visually 7 Grand Steps will not tax your graphics card, but the game has a great aesthetic style in the form of the arcade machine. Every element on the machine had a purpose and it really does look like something that could have existed in real life.

Now we get to the tricky part of the analysis: How was 7 Grand Steps? And that is tough to answer. From playing it, you can tell that this was a game where every aspect of the design was meticulously gone over and put together to create a specific experience. And that makes it hard to criticize.

Don’t like the screenshots fool you, 7 Grand Steps can be difficult; as the quote goes: The sins of the father are to be laid upon the children. Due to the random chance of acquiring profession tokens and general events, it is very easy for things to turn horribly for your family. 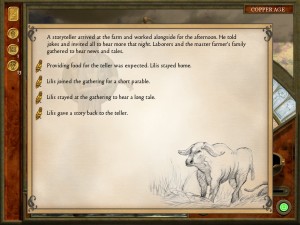 Major decisions will pop up from time to time that can either reward , or ruin your family.

The game doesn’t explain a lot of the systems and your first few times playing will probably end in failure. As events you didn’t know about or could have foreseen can cause things to snowball.

There is even a completely different way of playing the game if you reach the top of the social order that you may never see.

The game is being promoted as the first of several episodes that will cover the different periods of human civilization, if What Ancients Begat sells well enough to continue.

7 Grand Steps is an interesting game about abstracting the life and death struggles of a family. There is something compelling about watching all the choices you made unfold over time while managing to tell a story that is both epic and personal. Regardless, I’m sure you won’t play any other game like it for some time.