I am the Night:

Arkham Origins is a prequel story set a few years after Bruce Wayne became Batman. At this point Batman is more myth than fact and the police have orders to shoot on sight while the mob runs things. On Christmas Eve, the mob boss Black Mask issues a 50 million dollar bounty on Batman’s head and draws the 8 most dangerous assassins to Gotham, forcing Batman to dish out some Yule time justice.

If you’ve played either of the previous games then you’ll pretty much know the basics of the game. Batman’s time is spent grappling across the city, fighting thugs through combat and stealth and of course solving crimes.

The developers assume you’ve played the previous games and really don’t offer a lot of tutorial information on how to play, leaving a lot of it buried in the game menu. You have a few new gadgets to play around with, both for combat and for puzzle solving but nothing too different from previous games.

The combat system is still one of the best parts of the game, allowing Batman to make use of his gadgets to take down swarms of thugs at a time. The developers have made a few tweaks to the system with giving gadgets a bit more purpose this time around.

A new enemy in the form of the karate master is a welcome addition and requires more thought as they can counter your attacks. Also the developers have upped the number of enemies in a single battle and by the end of the game, expect to fight groups of enemies in the teens.

Stealth remains the same from previous titles, as Batman must use his gadgets and his verticality to thin groups of gun wielding enemies to survive.

A small addition comes in the enhanced case solving sections. Where players will use Batman’s detective vision to recreate a crime scene and watch it play out to determine where key evidence is located. Unfortunately, these segments are still largely linear. 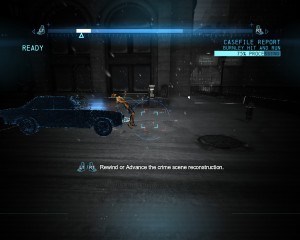 Crime scene recreations was the best new feature that WB Montreal added, but they still could use some development.

Case files make a return allowing the designers to throw more of Batman’s rogues gallery into the mix while providing the player with upgrade rewards for seeing them through.

These challenges split between combat, stealth, exploration and game completion, task the player to perform various objectives during their game. With experience rewards and upgrades for certain milestones within each of the first three trees.

Joining WB Montreal is the studio Splash Damage, responsible for Brink, Wolfenstein Enemy Territory and other multiplayer games to do Arkham Origins’ multiplayer mode. The mode involves two teams of gangs fighting over points while two players team up as Batman and Robin to take them down. I didn’t get a chance to play this however and I can’t comment on whether it works or not.

WB Montreal for all intents and purpose took Rocksteady’s formula and ran with it but that’s not really a positive this time around.

Batman: Arkham Origins plays almost exactly like the previous games, however something is a bit off. Whether it’s just problems from a new designer taking the lead or rookie mistakes, there is just an all around drop in quality.

Combat doesn’t feel as responsive this time around with many of Batman’s attacks leaving him vulnerable to attack. I had multiple instances of him not striking an enemy and dropping the combo chain. There were also plenty of cases where enemies would attack off camera and strike before I could retaliate.

Exploring the city also lost some of its luster as there were plenty of invisible walls and inaccessible rooftops. The Riddler challenges from previous games made a return but the puzzle solving behind them were not as interesting this time around with a noticeable lack of  challenge with them.

Out of the three systems, stealth felt the least unchanged from previous games. But it seemed like there weren’t as many places to use Batman’s gadgets when doing a stealth section. 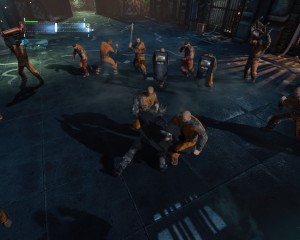 There are a lot larger fights this time around. If only the combat system was on par with Arkham City.

Then there were the bugs, from Batman falling through the streets, enemies getting stuck in walls, triggers not happening and more. For the first week of release you couldn’t complete a side quest to unlock fast travel to part of the city.

All in all, Batman Arkham Origins reminds me of someone in school who copied their homework from another student.

The main points might be correct, but it’s missing the details that come from an understanding of the topic. The game seems more like a copy of Arkham City, rather than an expansion of the series.

Even the boss fights felt toned down from the earlier games as the developers tried to capture the same mood, but didn’t make it. Their attempt at a stealth fight does not come anywhere close to the benchmark that Arkham City set with the Mr. Freeze battle.

Comparing it to the previous games by Rocksteady, this is definitely the weakest of the three games and comes out at being average compared to other AAA games released this year. If the Batman series hasn’t wowed you yet or you’re not a fan, Arkham Origins will do nothing to change that and is a decent attempt at a cash grab, but still a cash grab nonetheless.

A State of the Game Industry Cast