Bit.Trip has been an interesting series to watch its growth, going through the evolution of game design and graphics from pong to even the runner genre. Bit.Trip Presents Runner 2:  Future Legends of the Rhythm Alien is the first time that the series has a direct sequel and it features some great mechanics despite the simplistic design.

You Can’t Catch Me:

Series’ star Commander Video continues his adventure in Runner 2 in a story that it’s best not to think too much about. As obvious by the title name, Runner 2 is all about the runner genre and getting Video from one end of the level to the other without running into anything.

Graphically speaking, this is the most visually stunning game in the Bit.Trip series with insane backgrounds that are sure to delight as much as they can distract you from what’s going on. The controls are simple enough as every type of obstacle is designed with a way around it, whether that’s breaking through a wooden door, jumping over spikes and so on.

What makes Bit.Trip Runner 2 interesting is how new tricks and mechanics are introduced without complicating the control scheme. At the start, you’ll just be running, ducking and jumping to avoid things. Soon, you’ll have to combine ducking and jumping to get through narrow gaps, ride rails, reflect projectiles and more.

The game is also one of the few runners that I’ve seen that has rewards for expert players who want to take a risk. A new dance move lets Video score bonus points, but prevents him from reacting for a few seconds which isn’t good when there are obstacles coming. 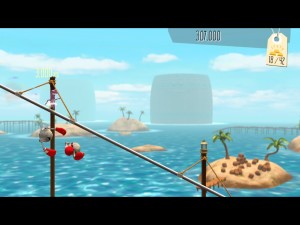 The game introduces a decent variety of obstacles despite the conventions of the runner genre.

Players can also forgo the mid level checkpoint to attempt a do or die run for more points.

Multiple difficulty levels affect the course layouts and there is a friend’s list high score table if you want to compete.

Bonus levels, costumes and new characters are hidden throughout the game and the level design is quite complex despite the runner trappings. Many levels feature multiple paths, with one having secrets but is a harder path. Boss fights make a return and are a lot fairer this time with checkpoints in between the different stages of the fight.

The main problem with Bit.trip Runner 2 is that despite the variety of challenges and levels, it’s still based off of the runner genre and can get repetitive quickly. I can only play a few levels in a row before my eyes start to glaze over and I have to take a break. One annoying mechanic that I need to mention are the “QTE” bonus parts that show up in later levels. These require you to hit buttons or move the control stick in a certain way.

I found them a distraction despite the bonus points and most often I would be knocked out by whatever was standing right after it.

What’s interesting about Bit.trip Runner 2 is comparing it to the other runner game of last year that I enjoyed: Race the Sun. In my piece I talked about Race the Sun as an example of an elevated take on the runner genre. Bit. Trip Runner 2 may not elevate the genre, but it is the most refined example of the runner mechanics and design that I’ve seen lately.