In part one of my analysis, I talked about how the changes to the underlining mechanics and systems increased the frustration level of learning the game instead of providing challenge to playing Dark Souls 2.

For this part, I want to turn to the level and boss design and where the problems continue to show up.

As in the previous title, Dark Souls 2’s world design is built around having the world mostly open from the start, with each area operating as its own ecosystem, with enemies, traps and bosses associated with it. In Dark Souls, the world still had a sense of geography as many areas connected to each other via shortcuts which could be found and exploited to cut down on back tracking. The only areas that existed outside of the general landscape were Anor Londo, the prison at the game’s start and the Painted World, while later areas could only be accessed from one entrance.

Having shortcuts used as the main form of environmental progression was the reason behind the connectivity of the setting. Dark Souls 2 on the other hand keeps thing more segregated in the sense that the areas feel more separate from each other.

Because of the use of bonfires as fast travel points, shortcuts between areas are no longer needed as the bonfire just takes you there instantly, but this comes at a cost of world building. The developers are trying to make the game feel like one big world, but instead each area feels like a separate place that exists only within its own boundaries.

For example in Dark Souls 1, I could reach Blight Town through two completely different paths through the world. While opening up shortcuts that could be used to get around quicker and provide a connection to the world.

While in Dark Souls 2, a lot of the areas have no direct connection to one another or shortcuts to and from. It feels less like exploring this world and instead picking a direction and following it for as far as I can go and then returning to the hub area and going another way. This lack of geography is particularly annoying in the area: The Lost Bastille which is a massive area with multiple boss fights.

The area stretches and bends so much that I completely lost track of where I was at a few points and somehow found my way back to other areas again. At one point I had to turn to a guide as I had no idea where I was supposed to go next and it turned out that something new opened up in the hub and I completely missed it. 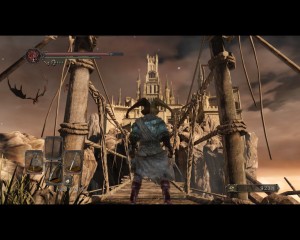 The environments definitely look nice, but there is no connection to these areas.

None of the areas feel like livable places, compared to the previous game. Instead they feel like the product of a game designer who needed to design corridor after corridor and then needed to fit them in somewhere.

One example would be the area: The Gutters, which is essentially Blight Town minus the poison pools and even less visibility.

The area is just a sprawling mess of rickety wooden platforms. But don’t worry; the next area after the gutters has all that lovely poison in spades. There’s just no sense of what the story is of these areas in the way that you got it from the decay of the land in Dark Souls 1.

Another knock against the level design is the amount of tunnels you have to run through that connect each area. This was obviously done to keep each area separate and not having to worry about designing actual transitions into the environment.

I’m pretty sure that I’ve not only missed major characters and events, but bonfires as well due to the confusing architecture of the maps. Early on there were several important things that I would have never discovered if it wasn’t due to messages from other people. And if someone has to turn to outside help to figure out your game, that is never a good sign.

Boss battles which are the main attractions of a Souls game are also lacking in depth; not only from the original Demon’s Souls but from Dark Souls as well. Every boss I’ve fought had the same exact attack pattern: Use sweeping attacks that go into combo chains, slower attacks that attack straight ahead and some flavor attack like an area effecting blast. This is a huge difference compared to the boss fights in Demon’s Souls that each one was an entirely unique battle, but this presents another problem.

With these bosses following the same attack pattern, it means two things. First that it makes them very predictable and two; it makes them far safer to fight with magic or ranged attacks. In my previous post I talked about the changes to rolling out the way and how agility determines if you can roll and avoid attacks.

This makes early bosses harder to fight due to having low agility and making it easier later on. But instead of it being because of game mastery, it’s because of abstraction from the skill. Another problem is that these melee focused bosses make it even easier to fight with co-op. I joined a fight against pursuer where I was literally the bait while the other two characters hung back and just launched spells until it died.

It feels like the designers were less about creating engaging fights and more about creating frustrating or basic ones. Two of the early bosses in the game were basically Smogh and Ornstein alone but fun size. Inside the Lost Bastille, you’ll fight a boss made up of multiple enemies and I can’t see how someone can solo these guys without either having heavily upgraded gear, or going full range and picking them off. 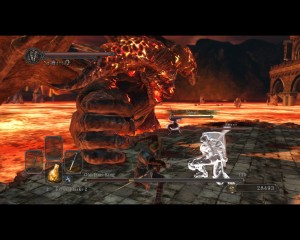 Despite a variety of sizes, most of the bosses in the game have the same basic attack patterns.

Later bosses continued to follow the same pattern of either a one on one fight with an enemy who loves sweeping attacks, or fighting multiple enemies at the same time. The former gets boring while the latter doesn’t test the player with unique challenges like in Demon’s Souls.

Enemy design is noticeably lacking as well compared to previous games. So far every enemy I’ve fought has the same pattern of either running at the player to use their same basic combos or trying to stay away and shoot arrows at them. Dodging arrows is a lot harder this time as enemies seem to lead their shots, but since many times they are firing off screen, it is very hard to avoid.

Enemies like the cart rolling skeletons, grim reaper, octopus head guards and more are nowhere to be found. Several enemies even appear in other areas for no discernible reason The only times things proved challenging, were when the designers sic 3 or more enemies on you at the same time. But this is more to the limitations of the camera and enemies being able to attack through each other than anything else.

By the time I reached the Iron Keep and discovered that these bad ass knights could be killed the same way as everything that came before them, I could feel myself getting bored with Dark Souls 2.

The changes to character development put a far greater emphasis on abstraction as opposed to player skill. I was having a far easier time in the mid game compared to being frustrated early on. But the game didn’t get easier because my skill improved, but because I had enough agility that I was now dodging attacks. That is a huge difference in design philosophy compared to Demon’s Souls where your equipment and level enhanced your skill, but didn’t take the place of it.

The Last Leg of the Journey:

It’s a shame as Dark Souls 2 from a moment to moment standpoint is a greater game in my opinion from the previous ones. The changes to duel wielding, increased weapon variety and spell casting refinements offers a great experience. However all that is meaningless when the level and enemy designs aren’t involving enough. It’s like the game is all dressed up with nowhere to go. And the greater emphasis on abstraction makes for a far more punishing early game, leading to a very boring mid to late game. 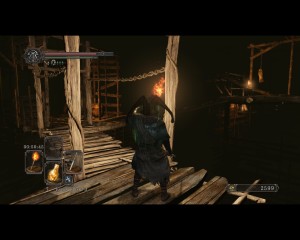 The Gutters is this year’s Blight Town in terms of annoying level design and ease of dying.

One last thing I should mention is that I did enjoy the new covenants and how they offer either changes to gameplay or provide suitable side quest challenges like PVP.

I reached my fill of Dark Souls 2, not because I reached a point where I don’t want to keep playing due to difficulty, but I’m so bored that I don’t have any desire to mess around anymore.

I finished the gutters path and beat the main boss there without finding two bonfires I believe. After beating him, I had no idea where I had to go next, I had four great souls from the bosses and I believe I’ve beaten everywhere.

But I didn’t know what to do next and the thought of having to return to any of these areas to find that one missed thing didn’t interest me in the slightest. I had a friend spoil me on where to go and low and behold, I missed one innocuous path in an area which took me to fighting the same enemy and boss patterns again. And again after beating that boss, I found myself completely unsure as to where I needed to go next.

Finally after more hints and turning to a location guide, I found where I needed to go and just completely blazed through the rest of the game. But by the end, it was just to get it done, not because I was enjoying myself.

Somewhere between Demon’s Souls and Dark Souls 1 and 2, there is a perfect game waiting to be discovered. If someone can take the level and enemy design of Demon’s Souls, combine it with the open world of Dark Souls and use the mechanics and general play of Dark Souls 2, we would have one hell of a game.

As I said in part one, there is always a chance that the developers will patch Dark Souls 2 to make the balance and early difficulty easier. But I don’t think they can fix poor level and enemy design. Dark Souls 2 is the classic example of two steps forward and three steps back and while it’s still a good game, it doesn’t hold a candle to its predecessors.