Defense Grid became a hit thanks to its elevated take on the tower defense genre and great map design that challenged players to come up with a variety of solutions. With a sequel kickstarted, many fans were hoping for a great sequel. However changes and additions this time have gone in the opposite direction.

The story of Defense Grid 2 continues your mission to stop an alien force that is threatening the galaxy. Armed with tower blueprints and AI partners, you have to defend different areas and prevent the aliens from taking cores that are set up.

The first thing you’ll noticed about the sequel is that there are a lot more starting options available with each map having multiple difficulty levels, special variants and ways to customize your game.  Before each map you can choose from available AI partners that will affect your special weapon. Previously it was an orbital laser but now you can have any number of abilities depending on what AI you pick.

As you play through the game you’ll unlock tower items that can be attached to specific tower types and used to further augment them. These items are tied to a Meta game and once unlocked, can be used on any maps.

Once in game, you’ll find that your options this time are limited as there are fewer towers. Instead, the new boost tower acts as a catch all for some of the specific towers last time. For 50 resources the boost tower will extend the damage and range of any tower put on it and can be used as a cheap option for blocking paths. Once a tower has been put on it, you can give the boost tower one upgrade like auto detect stealth, enhanced damage and so on.

The problems with Defense Grid 2 are that none of the changes to the game actually improve things and you’ll find very quickly a noticeable drop in quality all around.

First is that the lack of tower variety limits your options to only a few. I found the cannon type to be the best bet thanks to its high damage followed by the concussion and laser towers. Boost towers are required and take some of the challenge out of the game of knowing where to place the towers from before. 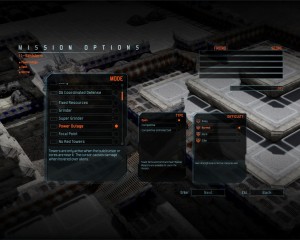 There are a lot of options and variants to play through compared to the first game.

Level design is noticeably lacking with most maps having linear paths separated by islands of empty space. But you can’t really build out the variety of paths that you had in the last game as the levels aren’t big enough. Speaking of not big enough, the enemies have been drastically shrunk in size are hard to spot. I didn’t see a way to examine them in game to know their weaknesses.

The different difficulty levels are of the worse kind and simply raise the stats of enemies instead of introducing new challenges. A good counter example would be Defender’s Quest that actually changed the enemies and situations per difficulty level with varying rewards. Here, the developers just have you doing the same thing but taking longer.

The problem with this type of difficulty design is that it punishes the player by forcing them to use the Meta game of tower items. Trying to play the game on hard and up at the start, I found it almost impossible as even the minor enemies were shrugging off all my towers and just hopped and skipped to the cores.

If they were so adamant about making tower items needed, they should have either had a few unlocked from the start or start giving them to the player earlier. What will end up happening is that you’ll blaze through the game on normal or below to get the tower items, and then have to repeat everything at the higher difficulties. Another example from Defender’s Quest was that the Meta game of upgrading units was always there and something to work towards. 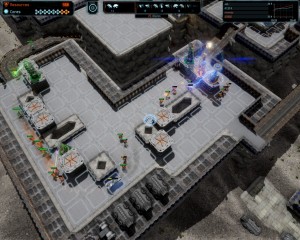 The maps are lacking compared to the first game and are more about open areas than dealing with various configurations.

The developers have implemented Steamworks to allow modders to create maps that can be downloaded and integrated into the game to get around the lack of map diversity. However that doesn’t make up for the lack of creative map designs by the developers themselves.

Ultimately Defense Grid 2 feels like a step down from the previous game and when your last game was one of the best TDs on the market, that’s not good.

Defense Grid 2 feels like it was developed for the console market first with how the UI and graphics have changed compared to the first game without specifically making concessions back to the PC version.

The all around drop in quality definitely hurts as well as fixing what wasn’t broken in the first place with towers and map design. The game does a poor job of explaining rules like how scoring works or that you can interact with the command module for added effect. While Defense Grid 2 isn’t my most disappointing game of 2014, it’s certainty the most surprising in terms of expectations considering the pedigree of the first game.

Catching Up with Energy Hook and Happion Laboratories