Titan Quest was an underrated ARPG from developer Iron Lore which attempted to challenge Diablo 2 back in the day. But lack of sales and DRM issues caused the series and the company to go under. But members of the team got together and formed Crate Entertainment to create a spiritual successor to Titan Quest titled Grim Dawn.

After years of being worked on and funded via pre-orders, the game is now on Early Access and while it is coming along, there is still plenty of work left to do.

The following spotlight is based on Build 23 of the game. Screenshots and impressions here may not match the finished version or later builds. The developers are hoping to have it finished sometime in the first quarter of 2015 at the time of this post. For my Grim Dawn review, you can find it here

Grim Dawn takes place in a steampunk-ish type world. Following a great disaster that has unleashed magic, monsters and who knows what else onto the world. You start Grim Dawn after being possessed and tied up outside of a town. It’s up to you to explore and help people while trying to figure out what has happened to you.

For fans of Titan Quest, the majority of the game systems and design are intact. At the start you’ll choose from one of five classes that specialize in different abilities, weapons etc. At each level up, you’ll gain skill points that can be applied to your respective tree along with a class point for improving one of your three core attributes: Physicality, Cunning and Spirit. These in turn will affect what equipment you can wear as you explore the world.

With each tree, in order to unlock new skills you’ll have to put points into mastering the class which will unlock new portions of the tree at certain thresholds. This creates the choice of having to decide to enhance the skills you have or go for the skills you want. At level 10, this choice becomes more complicated when you unlock the ability to dual class with any of the remaining four classes to officially create your character.

From there, you will explore the world to fight the monsters that have taken over. What’s interesting is that the developers have gone with a set world design with randomized elements. Meaning that on one play you may be able to go left in one area but the next time that way might be blocked. While it’s not as interesting as fully randomized area design, it does keep things from getting too stale. There are also points on the map that can be restored via in game resources to provide shortcuts.

Since Titan Quest came out, developers have been trying to change health systems to make things less reliant on potions. With Grim Dawn your health will auto regenerate to a point via constitution. Once you run out of constitution, you will need to find food or find a vitality drop from enemies in order to regain the ability to auto heal instead of using your healing potions. 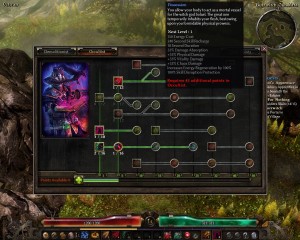 The skill tree system is the same from Titan Quest along with how you “create” your class.

Enemies, like loot come in different varieties with special “hero” enemies hidden around the map.

These creatures are like mini bosses and take a lot of damage to go down but will reward you with a chance at better quality loot. Speaking of loot, one returning element from Titan Quest is finding components that can be attached to equipment.

These components are tied to specific enemy types and once you find enough parts, you can combine them into a finished component with a randomized completion bonus. You can also use completed components in new crafting recipes that allow you to craft epic level loot if you can find all the necessary ingredients.

Overall Grim Dawn scratches that ARPG itch like Diablo 3 and Path of Exile, but the game still has a way to go to catch up to them in the gameplay department.

A foot in the Grave:

The big problem with Grim Dawn at the moment is that Diablo 3 and Path of Exile are out. Both games have done radical changes to the ARPG formula: Either Diablo’s skill system and loot design or Path of Exile’s giant skill tree and online focus.

Grim Dawn does feel a bit behind the curve as it is largely based on Titan Quest’s formula. Too much of the combat system at the moment is repetitive thanks to the lack of interesting skills or challenging enemies. Most enemies are of the “run straight at you” variety without any different attack types. The game lacks Diablo 3’s visceral feel but then again Crate Entertainment doesn’t have Blizzard’s development budget.

Graphics are also lacking with many enemies blending into each other. This also makes it really hard to spot elite and named enemies in the sea of guys who rush at you. And considering how strong they are, you could be killed very quickly without seeing what hit you. 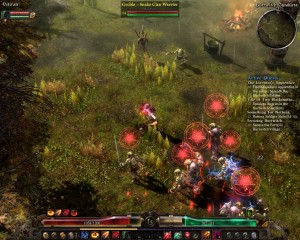 Enemy models aren’t as distinct compared to Diablo 3 and it’s easy to lose sight of critical enemies in the crowd.

But my biggest worry about Grim Dawn is that fans of the genre won’t look at the game when they have Diablo 3 and Path of Exile available. Melee characters in general are woefully behind compared to those in Diablo 3 where each melee class has means to attack, defend, escape and keep themselves alive.

Here, a lot of battles in melee resorted in me almost dying due to being overwhelmed without any options to survive other than to keep running away. At least Path of Exile keeps enemy numbers somewhat manageable and provided a lot of healing options.

Similar to Titan Quest, you are going to work at a deficit starting out until you get enough skills or the ones you like high enough to start turning the tide. Loot design also suffers from a similar problem in Diablo 3 and how slowly loot scales up as you level. I ran into the same situation where I was using loot for a very long time because I was not finding any upgrades on the ground or in shops.

I want to like Grim Dawn more than I am at the moment and we will have to wait and see on whether things will improve as the game continues to be worked on.

Right now Grim Dawn is an average ARPG and there still is work to be done in order to make it compete with the big boys. The foundation is great and having another ARPG on the market is not a bad thing, but Grim Dawn has been in development for so long that it’s stuck in that awkward phase of being developed based on an older series and trying to stand out while competing with the new designs on the market. 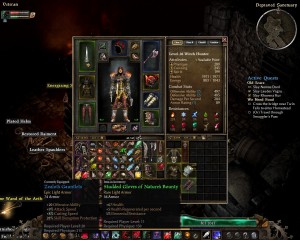 A major progression issue at the moment has to do with loot scaling and how it becomes harder to find upgrades once you start getting higher tiered loot.

Love it or hate it, Diablo 3’s skill system was one of the biggest shifts in ARPG design and one that I grew to love and it’s hard to go back to a very plain progression model.

And again, Diablo 3 is the biggest challenge against Grim Dawn at the moment at it really moved the genre forward while Grim Dawn is just taking baby steps.