Don’t Starve was a surprisingly well designed game mixing the brutal act of survival in a world that seemed home in a Tim Burton movie. After months of free content and updates, Klei Entertainment went to work on the first official expansion to Don’t Starve: Reign of Giants. And while it definitely adds more to the world, there is still one area where I have to argue with Klei’s design.

For those that haven’t followed Don’t Starve, the general idea is that of wilderness survival. You are stuck in a strange world with a variety of creatures out to get you and you must survive somehow. Each day is separated into day, dusk and nighttime where you must set up a fire to survive the night as something will attack you in the dark.

Using the materials of the land, you can fashion tools, equipment and more to survive and hopefully gather food to keep your stomach full and ways to keep sane. You can read more about the basic game in my original analysis.

With the launch version of Don’t Starve, the main complaint I had at the time was lack of content. This made surviving the world pretty easy once you figured out the tricks of the land. Before Reign of Giants, Klei’s big update to the game was in the form of caves which featured their own enemies, items and hazards to avoid. And while it added much needed variety, it didn’t do much about the over world map and the predictability.

So to that end, Klei has introduced two seasons to the world with summer and spring. Both seasons like the change when winter happens force you to adapt to the alter environment. During spring, rabbits which were a good source of food disappear and rain storms threaten your fires and more.

While summer removes your ability to grow food and creates the threat of heat exhaustion due to the high temperatures. New crafting recipes have been introduced to provide you with equipment to help you survive the new seasons.

The new seasons are a welcome change and their drastic affects on the world and strategy help keep the player on their toes. It’s now even harder to reach a point of sustainability thanks to each season (with exception to autumn) removing an important survival strategy. 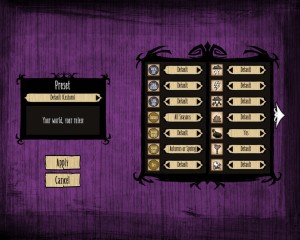 Being able to alter the world settings can make the game easier or harder for players.

The new giants who appear in the autumn, spring and summer seasons (and the existing winter giant) are the closest that Don’t Starve comes to having boss enemies.

These massive creatures dish out a lot of damage and will drop unique items if you can manage to take them down.

Reign of Giants does what any good expansion pack should: Add new content designed to mix up the main experience. However I still have problems with Don’t Starve’s design and I can sum them up with one word: Progression.

With Don’t Starve, Klei has made it pretty explicit what kind of experience they were aiming for with the game design. They want every playthrough to feel fresh and be challenging. The new seasons as mentioned are in line with this philosophy as they were designed to keep the player from reaching a point where they would be comfortable.

But going back to progression, I have two issues with the design. First is that the game still feels repetitive in how the crafting progression stays flat. Here’s what I mean: we can group all the materials in the game in escalating order based on where they are found or made. So logs, grass, stone would be tier 1, while boards, rope and cut stone would be tier 2 and so on.

Normally in games built around crafting tiers, as you go up each tier, the previous tiers either become obsolete or are less work.  In Minecraft for example, the materials produce the same tools, but at a higher quality. Allowing someone to mine better resources and gather the lower ones at a much faster rate. 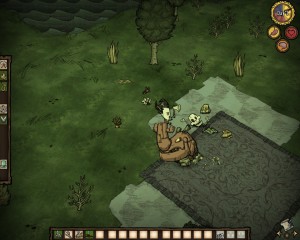 New enemies have been added both from patches and the DLC to increase the difficulty.

Don’t Starve however doesn’t work that way as you’ll always need the lower tier resources in order to produce the higher ones.

Meaning there is always that grind needed for chopping trees down or gathering grass and so on. While you can upgrade your tools, it doesn’t get rid of the fact that you’re dealing with resources that come from specific sources.

Because of how reliant you are on the basic resources, it makes the general play of the game repetitive as you only have the same way to gather them each time despite taking place in a randomized world. As I talked about with Jon Shafer on the podcast, if there was upgrades that made gathering lower tier resources easier it wouldn’t be so bad. But again this goes back to Klei not wanting the player to become settled in any way, shape or form.

The other problem is the lack of any permanence or persistence in the game. While you can unlock new characters which have different abilities, the world, threats and items remain the same. I would have loved for some sense of persistence, even in the form of a log book or achievements that become unlock through play and discovery. Again I know that Klei is against rewarding the player for playing just for achievements, but having some kind of carrot on the end of the stick would be a great motivator.

For what it is, Reign of Giants is a good add on to the Don’t Starve universe and helped filled in some of the cracks from the initial release. I still love the aesthetic of the game and Don’t Starve is one of the few games I’ve played where art, music and design are so integrated together to produce something amazing.

At this point now that survival takes place all year round, it will be interesting to see where Klei will take this design next and if they will ever make a Don’t Starve two, or continue to build onto this version.

The Impurities of Pure Upgrades in Game Design