Hack and Slash is the latest game from Doublefine and is all about breaking the rules, both literally and figuratively of the action adventure genre. And while the premise has a great hook, the game tries to be both smart and simple at the same time with debatable results.

You start your adventure in act 2, where a girl named Alice is thrown into jail for some unexplained reason. Finding a sword, you accidently break it to discover that the sword itself is part USB drive and allows you to hack any person, monster, object etc that has a USB slot on it.

From there you begin your quest with the game broken up into different acts. The challenge of the game is that you are literally hacking things and examining their code to change them to suit your needs. You can hack bushes to give out hearts when they are destroyed, turn enemies into friends and so much more.

Despite the screenshots here, Hack and Slash is not similar to Zelda in the open world aspect. Every act is made up of a selection of screens, puzzles and hackable objects and it’s up to you to get through it and fight the boss. You’re not really fighting enemies but instead working your way around them to get to their drive slot to hack them or figuring out what needs to be changed to get around a puzzle.

The hook of the game is that in order to win, you have to break the rules to do so. The puzzles revolve around altering something’s programming in order to suit your needs and as the game goes on, you’ll find special artifacts that let you alter the world as well. The game boasts your ability to break the game which is entirely possible when you start altering values to insane levels to the point where they had to give you an artifact that lets you rewind time in case the game becomes unfixable. 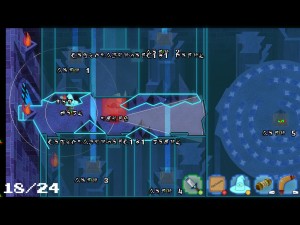 Being able to “hack” the world around is a pretty cool mechanic but here it feels limited by the scope of the design.

Chances are if you are a programmer, you’ll get a kick out of playing a game that willingly gives you the ability to break code and the game makes heavy use out of this feature.

For people who love making their own fun, Hack and Slash allows you to create actual mods and share them on the Steam workshop which is a great feature

. The problem is that a mechanic like this is really best suited to a secondary system not as the main course and where Hack and Slash slips up.

Hack and Slash’s main bullet point of being able to hack and alter the world sounds great, but it’s not really suited to be the main mechanic and the rest of the game suffers for it. When you’re not hacking characters, you’re going to be running around classic Zelda style. But the world itself is very plain with no real interactions other than the hacking.

It’s hard to sometimes hit moving enemies and there is just this sense of clunkiness to what you’re doing. Some areas have sections that have no purpose other than to give you another place to run through in between the important parts. Simply put, Hack and Slash’s gameplay beyond the hacking mechanic is very basic.

Another problem is with the coding itself.  The game assumes you have a basic knowledge of programming language and there are no in game tutorials or lessons to explain to someone how manipulating the code works or even how to make use of the limited UI. As the game goes on, the hacking gets more complicated.

Hack and Slash is not a bad game and the hook of being able to manipulate the game space like this is a great concept. But it’s not enough by itself to base an entire game on and there needs to be more to do to supplement the mechanic. 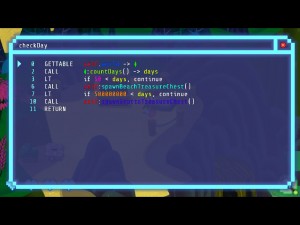 understanding programming logic and language is a good start to being able to figure out the game’s puzzles.

It reminds me a lot of the game Avalon Code for the DS which also had the lofty concept of letting you mod weapons, monsters and people to suit your needs.

A great concept, but without any meaningful gameplay it just becomes a one trick pony.

It feels like the developers spent all their time coming up with this system and leaving everything else for the end and hoping that the mechanic will carry everything else through. Hack and Slash is a great idea but is also proof that one great mechanic can’t save an entire game.