Following the reboot of Mortal Kombat, developer Nether Realm studios managed to redeem the long and stagnant franchise with a redesign combat system, story mode and one of the best single player fighting games around on top of its competitive play. And with Injustice Gods Among Us, they are taking a second crack at the DC Universe with a refined combat system, but things aren’t that super in this game.

Injustice’s best feature beyond the gameplay would have to be the story mode. Written by DC writers, Injustice’s story is all about that line that Superman must tread between being a hero and a dictator. After the joker causes the death of Lois, Superman snaps and assumes control over the world. Some alternate reality twists later and we have a fairly good excuse to watch heroes and villains beat the crap out of each other.

Production wise Injustice was pretty good, with many voice actors reprising their roles from the Justice League and Teen Titan cartoon series. The only major exceptions would be Mark Hamil and Clancy Brown not voicing the joker and Lex Luthor respectively.

The combat system is similar to Mortal Kombat’s with the use of a special meter to dictate modified and advanced moves, but there are some new twists to it. Each character falls into two categories of power or agility. This determines how they make use of environmental objects in the level. Every character beyond that is different, from their attacks, special moves and even a special “powers” ability tied to the B button.

But where Nether Realm really got things right would be with the actual combat system. In a piece I wrote about Mortal Kombat, I complained how the special moves and abilities weren’t tied to their respective button commands making it harder to learn. What they did with Injustice was instead of trying to tie button commands to a host of super powers, they streamlined it down.

There are three attack buttons: light, medium and heavy which special attacks are built around simple commands. Such as back-forward X or down-right A and this pattern is consistent across all the characters. So while fighting game purists may complain that things have been simplified, this makes it a lot easier to learn special moves and keep that retention across characters. 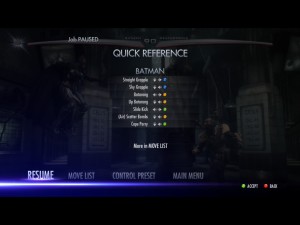 Standardizing special move commands was a smart move to help cut back on the learning curve of the game.

The special meter is used for enhancing special attacks, getting out of being hit along with a clash mode, where both players wager meter to decide who takes damage and who gets health back.

Lastly each character has a cut scene driven “super move” which is Injustice’s way of having the X-Ray attacks from Mortal Kombat, while keeping things PG. So while characters will be hit by cars, knocked into space and worse, there’s no blood or lost of limbs to worry about.

While Injustice sadly doesn’t have a version of Mortal Kombat’s krypt or bonus unlock mode, it does come with single player missions in the form of STAR Labs. The STAR Labs missions are all about variety with some being about battles with special conditions and others having completely different gameplay.

While Injustice is all around a great game, I have some problems both with the combat system and technical issues that really shouldn’t be there.

(Note: I played Injustice with the PC version using an Xbox 360 gamepad, the problems mentioned here may not reflect the console versions which I have not played.)

Despite the simplified control system and special moves, I still found Injustice somewhat clunky to play. Similar to Mortal Kombat, the combat system is rigid in the sense that there is a very limited amount of frames built into each character. Unlike in a fighting game like Soul Calibur or Virtua Fighter, you can’t experiment with the list of moves available to create your combos. 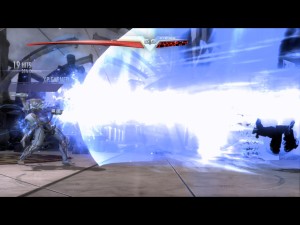 Super moves add some flair to the combat, but do get repetitive after repeat viewings.

Any deviation from what’s been programmed for your character will result in them just stopping all movement.

And just like Mortal Kombat, the game is very special move oriented as opposed to combos. The timing for performing the small number of combos was hard for me to get down and it’s very hard to tell when you are supposed to input the next attack in order to continue the chain.

Not helping matters was a very annoying bug only found in the PC version, where the game will slowdown for no apparent reason. The bug was found by the PC port developer Splash Damage, but the game is not receiving any more patches and therefore it remains in there.

Other problems include online matchmaking not working and textures not looking as good as on the console versions. All in all this is an example of a poor port for the PC which is a shame as the platform could really use great fighting games. As a counter example, Sonic and All Stars Racing Transformed was a great kart racer which was ported to the PC without any major issues and had continued work to make it better.

Injustice Gods Among Us despite the problems is still a good game and continues Nether Realm’s streak of great fighting games. I’m conflicted between wanting to see them continue in this style or try to elevate the fighting genre further. If they keep improving the formula and hopefully spend more time with the PC version, Nether Realm might just continue to improve the Mortal Kombat and fighting genre name.

Selling The Past: The Work That Goes Into GOG’s Store