When it comes to older franchises that have fallen on hard times, Sonic the Hedgehog has been at the top of the list for awhile. Since the Dreamcast era, the series has been more miss than hit. With Sonic & All Stars Racing: Transformed, this isn’t the first time that Sonic has taken to racing.

With past attempts such as Sonic R and the hover board racer, failing to connect. This along with the Sonic brand are normally the one-two punch to keep consumers away, which is a shame as this may be one of the better Sonic games to come out in some time.

Transformed is the second game in the Sonic & All Stars Racing series developed by Sumo Digital. Normally this is the part of the analysis where I talk about the story of the game… except here there is none. This alone may make fans of Sonic happy.

No epic back stories, evil villains to fight or mysteries to solve, other then why Danica Patrick is here and who the heck is Football Manager when the game itself is a soccer simulator.

Instead we have a few single player modes and multiplayer. Now, looking at the game from the outside, most people would assume that the developers were attempting to cash in on the Mario Kart fame with a similar design. However that isn’t the case and Transformed may be a better game than recent Mario Kart titles thanks to its more technical based gameplay.

The name of the game is boost bonuses which are earned by performing various technical maneuvers during a race. Prolong drifting around corners will power up a boost for when you come out of it, along with performing multiple flips and rolls while in the air. Unlike Mario Kart, you won’t be finding any game changing items here. 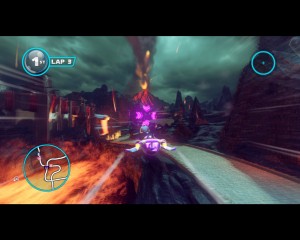 The graphics look amazing especially on many of the multi-vehicle courses.

While each character can transform into a super mode via an item, Transformed is more skill based and less about rubber banding AI.

Here, getting hit with enough items and missing enough turns will prevent you from ever catching up to first place. But on the flip side, the AI doesn’t become magically faster if they start to lose.

Transformed’s “world tour” mode serves mainly to unlock the multitude of Sega characters featured- from Amigo, to Nights and many more. The mode’s form of progression involves earning stars in each of the many events. The events ranged from basic racing, to survival mode among many others. Every event can be played in one of four difficulty ratings: C, B, A and S rank (which has to be unlocked.) 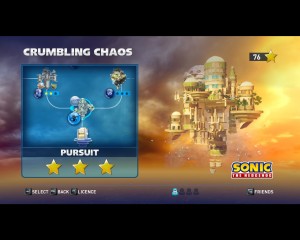 World Tour mode offers a novel way of challenging the player, with new characters as rewards.

The harder the rating the more stars that are awarded and trust me, things get difficult.

Playing on C rank, you could miss every trick and drift chance and still get in first place. While in S rank, finding every shortcut and getting every boost is almost a requirement for winning.

For those playing the PC version, a keyboard is somewhat adequate, but I would suggest using a gamepad if you are aiming for completing every challenge.

Part of Transformed’s charm comes from the variety of Sega Properties used both for tracks and racers. Every racer has different stats and can be changed in the form of leveling up that acts as a basic meta-game. Each time a racer levels up they earn a mod that can change their base stats.

The courses themselves run the gambit of Sega games: From Shinobi, House of the Dead 1, Burning Rangers and more. The transformed in the title refers to how each racer’s kart can transform between car, boat and plane mode during a race. Many courses have their layout changed over the course of the race, and shortcuts that are taken with a different vehicle.

The main problems that I have with Transformed are the course designs. The issues are two-fold, with the first one having to do with the racers themselves.

As you play and unlock more of the tracks, you’ll come to realize that the different courses are clearly designed for certain karts to have an advantage.

There is a huge difference between a kart that has high rank in handling and one that doesn’t, which you’ll easily see on courses built around multiple tight turns. Another example is if you use a car with a low speed rating on a course with a lot of straight-aways.

This isn’t a huge deal if you’re playing on the easier difficulties, but it does take out some of the fun when you have to use certain racers to stand a chance on some courses on the harder difficulties. 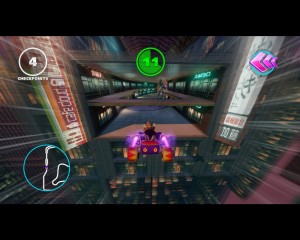 The visuals can make the screen appear busy on the harder courses, making it harder to navigate

Especially when you attempt to complete drift challenges, which become difficult if you use a low handling kart.

This is an area where Mario Kart doesn’t have an issue with, since the different racers aren’t as different to each other compared to Transformed.

The other problem is that while the courses look good visually, their backgrounds are very busy: From characters dancing, to spaceships blowing up and more. This in turn can make it difficult to pick out where you have to go or even what direction the track is turning in when you are in doors.

Still, Sonic & All Stars Racing Transformed is surprisingly both a good kart racer and a good Sonic the Hedgehog title. For PC gamers especially, I don’t think you’re going to find other kart racers of this caliber. If you can put aside such questions like “why does Sonic need to drive a kart” you’ll have a good time racing through Sega nostalgia.