Manifold Garden is a Visual and Cerebral Treat

Manifold Garden is the passion project of artist William Chyr who was inspired by MC Esher to create his first game. Seven years later and after a lot of work and struggles, the game is finally out; delivering an impressive game for puzzle fans.

You are stuck in a world of impossible objects with the local environment stuck in an infinite loop. There’s an overarching story based on clearing corruption from the world, but the heart of the game is touring this amazing world and solve the puzzles within it.

The rules are quite simple, you are able to shift gravity to turn any wall into a floor and any ceiling into a wall. Throughout the game you’ll find cubes and objects tied to one specific plain represented by a color. When you are on the same plain as an object, that object will become interactable or perform something that you need. While you are always surrounded by bottomless pits outside of the buildings, all they do is simply loop you around the area, which becomes a part of the puzzle-solving.

Manifold Garden is a beautiful game with every area breathtaking. The game makes use of all straight lines to give you impossible objects and one of the trippiest experiences this year. There’s just something beautiful about falling through some of the areas and watching the world loop around you. Every aspect of learning the game is built organically into the environments and early puzzles. Even though your interaction with the world is limited, the game comes up with different ways of testing your mastery of the rules.

Some of the most advanced puzzles in the game involve having to use the looping feature to explore massive areas to figure out the order of things to do. In these situations, one puzzle becomes a set of mini-puzzles that each requires your attention to complete the major task.

This is going to be one of those quick reviews as spoiling anything about the game would do it a huge disservice. With a title like Manifold Garden, you can just feel the amount of work that was put into it, and it makes it hard to talk about issues with it.

Dancing on the Ceiling

Manifold Garden is a game that wears its design on its sleeves in a manner of speaking. You can watch any video on the game and immediately know if the game is for you. There is no fluff or padding to Manifold Garden, and likewise, there are no in-game hints or guides for it.

Many of the puzzles feature solution as mindbending as the world around them. This is one of those games that can be mentally exhausting to play for long periods of time, and I don’t recommend it if you suffer from motion sickness or acrophobia. 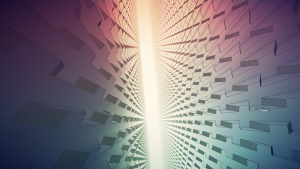 The game is trippy and beautiful all at once

If I had any major complaint about the game is that some of the puzzles are difficult for the wrong reasons. There were a few sections where because I wasn’t looking in the right direction, or was coming in at the wrong plain, I missed an essential piece to solve a puzzle. There are secrets in the world, but I wouldn’t even know where to begin tracking them down.

There really isn’t anything else to say about this game from a design standpoint, other than it is an amazing combination of art and design. This is one of those games where I had to stop for a few seconds just to marvel at the world.  The passion for this style and game can be felt all around it, and while I know it’s not for everyone, for the people who do enjoy it, you’re going to have one amazing time exploring infinity.