Catherine was released last generation as one-part romcom/horror mixed with puzzle design. The quirky gameplay and story created a niche fanbase wanting more, and Atlus/Sega were happy to bring things back. Much more than a re-release Catherine Full Body was a chance for the developers to do more and go to new places.

The basic story of Catherine has not changed. Players control Vincent Brooks: a man dating Katherine — a career and professional minded woman looking to make Vincent better. One night he meets Catherine — a free-spirited woman who is willing to let Vincent indulge in his wild side, and he begins to have a relationship with her.

If cheating on your girlfriend wasn’t bad enough, Vincent begins to have nightmares where he must climb a tower or die while being transformed into a sheep.

Catherine could best be described as one-part visual novel and one-part puzzle game. During the day sections, you’ll follow on with the story and choose how Vincent responds to certain situations. This, in turn, affects a meter that will ultimately determine the ending that you get and who Vincent ends up with. At night, you’ll go through stages of puzzle towers.

Your objective in each stage is to reach the top of the tower by pushing and pulling blocks to make platforms to climb. These puzzles can get very tricky, but there are checkpoints and items you can use to help. While it may not look it, there is strategy in terms of what blocks to move and where things will fall into place.

All this was par for the course for Catherine, but Full Body delivers an almost “Catherine 1.5” experience.

The New Girl in Town:

For returning fans of the original, Catherine Full Body does boast several improvements and additions. From a gameplay standpoint, there is now a new “story” difficulty for people just wanting to follow the crazy tale. If you’re looking for new puzzles, the game features an expanded arcade minigame and a new “remix” mode. Remix gives you brand new puzzles throughout the game that make use of tetrominoes to challenge you in all the difficulty settings.

However, the main draw of the game is the addition of a new character to complicate the love triangle with Rin, a mysterious girl with amnesia. Instead of being an expansion or post-game content, Rin’s story and interactions with the main cast are fully integrated into the game. New cutscenes, conversations, and a different set of endings are the main draw here.

During the puzzle sections, Rin can play piano that slows down the rate of the tower collapsing — giving players a helping hand when they need it. Rin’s major story twist does deserve to be talked about, but I won’t mention it here for spoiler purposes. 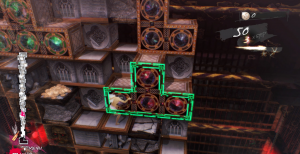 The one thing I will say is that if Katherine represents the quiet live, and Catherine is the wild one, Rin’s story arc represents living life your way. And that gives us a perfect segue way to briefly talk about the story of Catherine in general.

Despite being eight years old now, Catherine’s story remains as one of the most unique ones I’ve come across. I really appreciate that despite the over-the-top situation the game tries to have a serious discussion about relationships and adulthood. This is not a game about teens, but adults trying to figure out what they want in life.

No one in the main cast could be considered 100% good; they’re adults, they make mistakes. This is not a story about saving the world, but just figuring out what you want out of life. Going through the game to purposely get Rin’s ending for the review, I thought things were done tastefully, but I know I’m not an expert on such matters. There have been edits done to the previous version to remove some of the jokes people found tasteless.

Ultimately, your enjoyment is going to depend on what you were expecting out of this re-release. If you wanted a brand-new game, this is an enhanced edition of the first one. Most of the changes and additions were on the story side, with exception to the remix mode. Still, I did appreciate the developers going through the entire game to integrate the new content; something I expected more of in the Switch remake of Link’s Awakening.

If you missed the game the first time around, you’ll find a stylish puzzle game that can be enjoyed by all skill levels. While not for everyone, this rom-com-horror game stands as one of the few times where a videogame has a talk about romance and life, it just occurs with giant towers and sheep running all around.

Manifold Garden is a Visual and Cerebral Treat