Massive Chalice was Double Fine’s second kickstarted title and Early Access game. Following the developmental failure of Spacebase DF-9 and the arguably schedule failure of Broken Age. With this, Double Fine once again attempts to create a gameplay focused title and we’re left with something that has an amazing concept, but is lacking in the fine details

The story of Massive Chalice is that you control a kingdom that is being besieged by a corrupting force called the cadence. Aiding you is a massive chalice that has two spirits that advise you. It turns out that you are immortal just like the chalice spirits and it’s up to you to keep the kingdom protected long enough for the chalice to charge enough power to wipe away the evil forces.

Being bound to the chalice means that you cannot directly engage in combat, but you can guide heroes from the various families and clans in battle. The hook of Massive Chalice is that every one of your heroes is unique; with stats, traits and personality quirks assigned to one of three classes at the start.

Because a single game takes place over hundreds of years, your heroes won’t survive long enough to see the world saved. As they continue to age, different stages of their life will affect their stats and eventually they will get old and die of old age (unless they die in combat.) This brings us to the other unique feature of Massive Chalice and how you manage the genealogy of your heroes.

After the initial tutorial, you can build keeps and assign two of your heroes to manage them and become married. In turn, the heroes will raise families that will become new heroes once they hit 15 years old. The children will receive stat boosts and personality traits from their parents, along with one other thing. If the parents are from two different classes, their offspring will become a hybrid class; gaining the abilities and functionality of both classes to be something different. 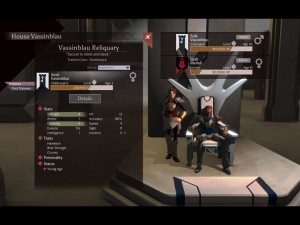 This way, the number of possible classes and party combinations expands from the initial three as time goes on.

Besides your heroes, you can research new structures, equipment and more at your castle. Similar to X-Com, there are certain researches that are tied to enemies; they require you to kill X amount of a certain enemy type before you can research them.

You’ll need to keep track of your dynasties; making sure that there are heirs and mates available to keep them alive and the family strong, as without them, you won’t have anyone to fight for you when the enemies invade.

Before and after combat, you’ll be taken to the kingdom screen, where you can watch the days go by while you wait for attacks and grow your kingdom. Another XCOM similarity is that each province starts out with zero threat to them. If you fail a battle or leave a province undefended, the corruption will grow. Once a province hits three points of corruption, you’ll lose it for the remainder of the game. If the corruption hits your castle where the chalice is and takes it over, the game will be lost.

When an attack begins, you’ll choose five party members and take them to the field of combat.

Combat in Massive Chalice is turn based with an I Go, You Go system. You’ll move your party first and then any enemies that have been spotted will make their play. The levels are all procedurally generated with environmental obstacles and enemies strewn about.

Combat is very simple, with everyone built around a two action system similar to XCOM. Party members will unlock skills as they level up and experience is given out based on who gets the finishing blow on an enemy, however all surviving members will get exp after the battle is over.

Your three initial classes are split between melee only, melee with range abilities and one ranged class. Accuracy works differently depending on whether you are attacking in melee or range; with melee there is a chance that the attack will be a glancing blow and do less damage, while range has a chance of completely missing. The enemies are built around different types; from long range casters to suicidal bombers, but they all have the same pattern of charging you and can easily be baited. 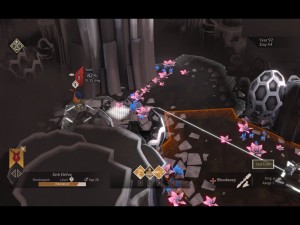 Combat is very shallow, despite the variety of classes, personality quirks and enemy designs

For those hoping for tactical options like overwatch, counterattacks and more, there are none. Nor are there any cover options or greater use of the environment with exception to destructible pieces and a basic stealth system.

Because the classes are split between range and melee, I found that having a greater focus on range was the safer option, allowing you take out many enemies before they get into attack range.

Each character’s stats and personality traits will affect their combat potential and another part of the genealogy aspect of the game is trying to get positive traits passed down with superior breeding.

Massive Chalice quick frankly is a game that I hate. Not because it’s a bad game, but because it’s so frustratingly close to being fantastic, but slips up on some critical areas.

Massive Chalice’s concept of combining tactical battles with a genealogy/dynasty system is a brilliant idea, but the developers didn’t go far enough to refine this into one unique experience.

The dynasty system is too limited and doesn’t approach the same level of meta game connection that the strategic/base layer did in X-Com or Enemy Unknown, or the level of options you had playing a game of Crusader Kings. The idea of having these families come together and create generations to live and fight for you is original, but I wanted more of an impact both from my interaction and the dynasties themselves.

Maybe one family grows to become prominent blacksmiths and their gear is always better, or another family would provide food that increases the health of everyone. Taking this from the battles to the dynasty, let’s say a family member grows to hate a certain enemy type and from that point onward, all members of that family do extra damage to that one enemy type.

There just isn’t a true connection that the player can easily follow between the dynasties and how they approach the tactical layer. Speaking of the tactical layer as I mentioned, the actual commands during combat are very limited.

Another missed opportunity would be to further differentiate the classes with unique abilities and mechanics that could give the combat more personality. For instance, having the shadowjack which is a melee stealth unit, do more damage by sneaking up on an enemy.

Lastly, the UI is very cumbersome and features some clear lessons on how not to make a good strategic UI. Information is hidden within several screens of data, relevant information for what you’re looking at is not displayed and I messed up due to missing some key information with the dynasty system. You can watch my campaign run that I put up on YouTube for more examples of what I’m talking about here.

Massive Chalice comes really close to being one of the best games out of Doublefine, but misses the mark due to these critical issues. Normally I would say that this game could change over time and become better. However, Massive Chalice was already kickstarted and went through Early Access and this is the final outcome.

I hope that someone doesn’t look at Massive Chalice’s design and call it “a failure” and leave it that. Because this design has amazing potential, but it’s just lacking those finer touches to bring it up to the same level of greatness that Firaxis achieved with Enemy Unknown or even the original X-Com.

Gods Will be Watching Spotlight