I’ve said it before but rogue-like mechanics have become a popular way of adding depth and challenge to games. From Binding of Isaac, Rogue Legacy and today’s game. Risk of Rain is definitely a modern throwback: featuring an experience that is modern and old school at the same time… both as a plus and a negative.

The story of Risk of Rain is that a cargo ship transporting creatures and goods is attacked and crash lands on a planet; forcing the survivors who escaped to fight their way back to the ship to get off the planet.

At the start you only have one class available to play with more that become available by completing specific tasks. Each class handles completely differently from one another which lends themselves to different playstyles.

Risk of Rain features somewhat randomize play. Each one of the game’s levels is a set design, but certain parts of the environment may or may not be accessible. Item placements, exits and enemy spawns are completely random. The general flow of each level is to find your way to the exit portal that is setup somewhere in the level.

Activating it will start a timer where enemies will spawn in and the boss will appear. The enemies will keep appearing until the timer runs out while you’re dealing with the boss. Once all enemies and the boss are defeated, the exit portal becomes accessible and you can move on to the next level. To make things harder, the game keeps track of how long you are playing and every five minutes, the difficulty of the game will go up.

This affects enemy strength which in a game where you only have one life is not a good thing. But while it may seem prudent to rush through the levels, you’ll need to find items to give you the edge to win. Killing enemies and opening chests will drop coins that can be used to buy items from shops, opening locked chests and from shrines which offer random rewards.

Risk of Rain is definitely a rogue-like in the item department, with items vastly ranging from increasing defense, offense or special items with a cool down. Every item found in the game is an upgrade with some more so than others. Finding multiple versions of the same item will increase its affect making sure that nothing becomes useless.

The progression system of Risk of Rain goes for a slow burn, with challenges and achievements tied to item unlocks. Challenges come in both class specific and general and will unlock new items to be found in subsequent games. 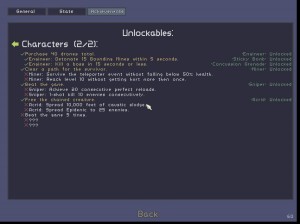 Challenges provide an incentive to try the different classes for new item rewards.

The items in Risk of Rain can radically affect your play style based on what you find and avoids the same complaint about runs feeling similar that I had with Rogue Legacy.

While the game is not long with about 40 minutes worth of content in a single run, the game is meant to be replayed. The replayability is there in the form of completing challenges and for trying the different classes.

While the game doesn’t go for complexity in terms of mechanics, I liked how easy it was to get going and challenge the player. This is definitely not a game that you’re going to win on your first try and after about 30 tries, I finally won.

However, while Risk of Rain goes for old school charm, it’s not completely a positive.

When it comes to Risk of Rain’s aesthetic, the only positives are the soundtrack and backgrounds which are pretty good. Graphically speaking the pixel art just doesn’t do it for me with only the bosses showing any kind of detail or visual style. Minor enemies tend to group up into roving blobs of units which in this kind of game is not good.

Sometimes you may think that a single enemy is hitting you when it’s really several all grouped up. Since your character also doesn’t stand out, it’s very easy to lose yourself in a sea of units while your health bar decreases rapidly.

The actual number of level variants and boss fights was pretty small for a game built around replayability. I would have liked to have seen either more bosses or random attributes to make things more random.

The most damning thing about Risk of Rain and what really sucks is the game’s multiplayer mode. While you are free to play with up to six players I believe, the game only allows for direct IP connection either to a server or to another player. This means requiring you to enter in the IP and port every time with no server browsers unfortunately. 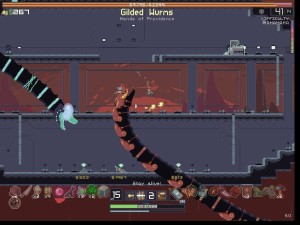 The bosses are varied but there was only a small # of them to fight.

Trying to play with my friends, we ran into problems connecting to each other and the game offers no assistance.

For such a major system, there should have been more work spent on building an online architecture. Especially in this day and age where simple to use multiplayer has become a major component of PC design.

This is a shame as I’ve only gotten a few multiplayer games working with friends and it was great running around the massive levels. Speaking of massive levels, going back to the lack of level variants, the levels are very empty and could have also used more random elements as well.

Character balance can be called into question when comparing the game between single and multiplayer. The melee focused classes are at such a disadvantage due to the game’s design that I can’t see a way for them to stand a chance when being the only character on the map. Having a ranged oriented partner to draw fire seems to be the only way for melee to have a shot at surviving.

Risk of Rain is a simple idea that is elevated thanks to its rogue-like mechanics and systems. I don’t know what the developer plans are for it but I hope that they expand on the mechanics to give us a game that is a bit more modern and less old school.