We’ve been talking about Arcen Games for a while now and if there is one thing you can certainly appreciate about them is that every one of their games is a unique product. Shattered Haven which was released this week is a different title from their previous games and may be their strongest showing yet.

Shattered Haven is considered Arcen’s longest developed game, with the original development started in 2008. After which the game was put on the back burner for other projects.

The story of Shattered Haven takes place after what appears to be the zombie apocalypse meets Lovecraft. It has been 9 years since an event that has caused the dead to come back, the land to tear itself apart, and mysterious creatures seem to be in charge. The enemy of the day is Greys: Zombie like creatures whose only weaknesses are fire, water and iron.

You control a group of survivors: Darrell and Mary, with a second group consisting of their daughter Lela and another survivor named Pierce.

When Pierce runs off in pursuit of his mother who was transformed into a gray and Lela follows, Darrell and Mary go after them to save them.

As mentioned earlier Shattered Haven is different from Arcen’s previous works, primarily by the fact that it is linear. The game is split between two types of sections: the over world and individual puzzles. 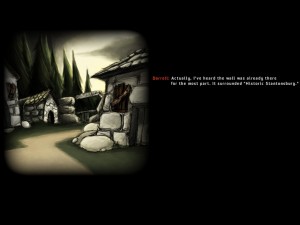 As you explore the over world you’ll find items that can get you past obstacles and portals taking you to the puzzle sections.

Each chapter of Shattered Haven has multiple puzzles requiring you to beat them all to move on to the next along with bonus optional puzzles hidden around the world.

While the game is linear, there are multiple endings based on major choices you’ll make as you play. But the only way you’ll see those choices is to get through the puzzles which require a mix of quick fingers and thinking.

Shattered Haven’s puzzle sections are built as environmental puzzles. Seeing as how Greys can only be hurt in specific ways, you are limited in how you can take them out.

The main items in Shattered Haven’s puzzle sections are split between those that can harm Greys, those that can stun and tools that can get you around obstacles. The usual goal of each puzzle section is to find a way to kill every Grey in the area, made harder by the fact that the items that can hurt them can only be used one time before breaking. 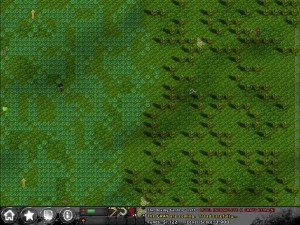 The art style while uniformed can make both friend and foe alike blend into the background.

The Greys themselves come in different varieties based on how quick they are, their health and their pattern for moving.

The puzzle variety of Shattered Haven is well done with each one providing different degrees of challenges.

One puzzle may have you frantically running away from Greys as you try to reach each item that could take them out, while another one has you strategically moving to find the items needed to reach the goal.

As in previous Arcen titles, Shattered Haven is designed for moderate and up gamers and there are several ways to show how awesome you are. Difficulty levels affect how fast Greys will come at the player with the hardest level appropriately named “possibly impossible.”

Beyond the difficulty level, most puzzles have bonus objectives that can be attempted to effectively “gold star” the puzzle. The bonus challenges are all about forcing you to change your style such as not using specific items or beating a level without getting hurt. As the overall difficulty of the puzzles continues to increase, so does the skill required to completely conquer them.

Overall there is a lot to like about Shattered Haven. The story has a great personal feel to it as it’s not about saving the world but rescuing family, with finely crafted puzzles. Shattered Haven also has a level editor for prospective modders to try their hand at puzzle making. Lastly there is local co-op that allows two players to play through the puzzles or explore. 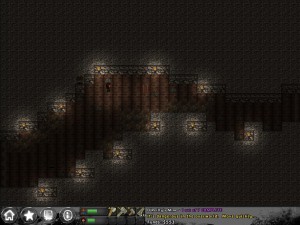 The background blending can become very dangerous in many of the game’s darker areas.

In terms of design I only have a few nitpicks with Shattered Haven.

The basic art style while effective lacks any kind of visual pop making everything blend together and hard to sometimes see enemies or even your character. This is made worse in dark areas where that background prop could really be a sleeping enemy.

One element that is debatable is that there are no short cuts to getting through the game. Some puzzle titles these days offer a constantly defeated player the option to skip a puzzle and move on. Shattered Haven in keeping with Arcen’s style of challenging their players does not have that and every main puzzle in the over world sections are required to beat. Personally I’m alright with that, but this is a point to consider for casual people interested in the game.

Control wise, it can be a little difficult to carefully move your character around with a keyboard compared to a gamepad. There are several areas that require you to move around one character wide areas to avoid traps and it can be easy to accidentally go too far.

With A Valley Without Wind 1 and 2, I talked previously about how while the designs were good, there was a lack of cohesion of all the elements of each game that overall came out as a negative in my opinion. This is why Shattered Haven works so well, as all the elements: from art style, music and gameplay mesh together.

While the game isn’t randomized which has somewhat become Arcen’s M.O. , Shattered Haven is stronger as a linear game thanks to the well designed puzzles that wouldn’t be possible if the game was randomly generated.

Shattered Haven may not have the replay ability and depth of Arcen’s previous high mark: AI Wars, but it does stand as an example of how well a game can work as a cohesive product. For people who like their puzzle solving to come with some scares. Shattered Haven is a great game to check out.

Podcast Delay Due to Technical Issues