Arcen Games despite releasing a lot of games in 2013 is probably known best for their massive sci-fi strategy game AI Wars. Since then, they have tested the waters with strategy design either as a Meta layer in A Valley Without Wind 2 or something all together different like Skyward Collapse.  With The Last Federation, the developers return to space with one of their biggest (and confusing) games yet.

The Last Federation tasks you as the lone surviving member of a species of hydras, who were wiped out after being deemed too much a threat to the galaxy. After years in captivity, you’ve broken free while stealing one of the first space faring ships in an attempt to broker peace with the various species… by whatever means necessary.

The setup is quite similar to Soldak Entertainment’s Drox Operative but where it was an action RPG on top of a 4X universe, The Last Federation has a greater focus on grand strategy and less on action. Your main currency in The Last Federation is influence which is earned or lost based on your actions with each species.

Help someone out and you’ll gain influence, do something that annoys them and you’ll lose it. Influence is the determining factor in what actions you can take with a specific species and you’ll need to gain enough influence before you can start talking about a federation.

As you play a game, each species’ power will rise and fall based on what you do and events that happen over time. What’s important is that your goal is to get the federation formed, not help these different species become better. This means one strategy may be to hurt whoever is the strongest to take them down a peg to either get them to join or give your federation a fighting chance against them.

The simulation model for the game is really quite detailed as the various planets are effectively playing their own game separate from you and your actions. 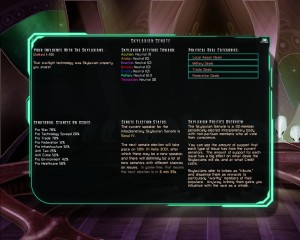 Each species handles diplomacy differently and is a great change of pace from traditional strategy games.

One element that The Last Federation does really well is integrating the lore of the game into the gameplay itself.

Unlike other strategy games where each side essentially acts and responds the same, here each species has a completely different diplomacy model.

One species is ruled by a counsel requiring you to find ways to influence or get rid of members, while another is ruled by an insect queen and you’ll have to worry about what birthing cycle it’s in.

The Last Federation features an interesting “tutorial” for new players by hiding advanced systems and information and unlocks them as the game progresses. You do have the option of starting a game with all systems and mechanics opened from the start. Tech acts as the main upgrade system for you and the planets and can be stolen, traded and researched to your benefit. This is the main way for you to directly improve your ship outside of buying new weapons.

What makes the game unique is that you’re making choices and decisions as you would in a 4X game, but doing it across multiple sides as opposed to controlling just one.  On that front, the game’s interesting take on strategy reminds me of Arcen’s previous hit Skyward Collapse and how you’re a third party controlling multiple sides.

From a macro level The Last Federation has a lot of great ideas going for it, however when we start to look deeper at the game is where things get complicated.

As we’ve talked about on previous podcasts and posts, strategy games are very challenging to design by the fact that they are a series of interconnected systems. And if one system doesn’t work right or isn’t properly explained, it can create a ripple effect and hurt the game.

With The Last Federation, it runs into the same problem that a lot of grand or 4X strategy games face: That your choices aren’t properly explained. The game starts off fine with telling you what influence is and the choice of introducing space faring tech to the species. But from there things get really muddy in my opinion and I’m left with all these choices but no clear explanation of what they actually mean.

For instance you could attack a pirate base for a specific planet or assist with building ships, but outside of impacting influence there is no explanation as to the greater purpose of those actions.

Another point is that you can pause and un-pause the game to let time flow, but again the player doesn’t know if they should be letting time run normally or just keep it paused outside of waiting for tasks to end. Having game systems hidden was a smart move, but without a firm grasp of the mechanics, it leaves the player feeling smothered by all the new systems. 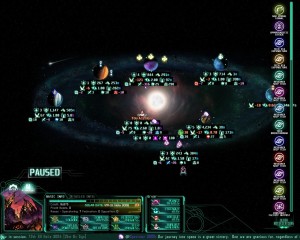 It’s very, very easy to be overwhelmed by information as the game goes on.

When the game adds in planetary readings, it tells you that the higher the number the better and that they can cause events to happen. But the deeper meaning to these events is left unexplained to a new player.

After the event log shows up, prepare to be assaulted with alerts, numbers, dangers and more. This is the perfect example of information overload.

But again, you don’t know why you should be actively trying to impact those numbers or what the greater strategy is. In essence, playing The Last Federation, I felt like I’m just clicking buttons and watching numbers go up and down without any sense of the larger plan or purpose behind them.

Because the entire game is built on top of a simulation model, your choices don’t make immediate results. Instead you make an action to impact something and then let the simulation run from those affected areas. However not having immediate feedback makes it very hard to learn if what you’re doing is impacting the game or helping you out.

Your only guide to the game comes in the form of the computer adviser screen. This important screen shows you what races you should try to focus on along with any tech researches that you should be looking to acquire for yourself.

Combat is somewhat of a mixed bag and from reading the forums, it went through a lot of iterations before coming to what we have now. From the screenshots posted, you would think that combat is real time like Drox Operative but it is instead turn based. Each turn, you can allocate power to either weapons, shields or engines which determines your capabilities during the turn. Then you need to decide between select, auto or holding fire which impacts how your ship fires.

You also decide what weapons to fire and where your ship moves and then the game runs a few seconds of combat with all your choices and then you repeat the process. Unfortunately combat feels like it’s stuck in a tug of war between being slower and more tactical and staying turn based, or letting the player cut loose and control it real time.

The problem is that the turn based side doesn’t feel tactical as much as it is tedious. You start with three types of weapons which do different amounts of damage based on the ship and their status. But the game explicitly tells you what weapon type to use so it’s not a matter of strategy but just following orders.

There are a lot of types of enemies along with bullets, lasers and missiles coming at you. And even with the game turn based, it feels like a bullet hell shooter. Trying to perform advanced maneuvers to avoid shots turn based, doesn’t feel right. But the worst thing about combat is that despite the game’s focus being the 4X handling of the species, dying in combat will end your game.

Having one of the smaller systems in the game impact your success so greatly seems like an odd choice. However as if Arcen was reading my mind, they did update the game to include a toggle able permadeath option and you can just auto resolve now. With combat, I would have preferred something that was either completely tactical or completely real time as opposed to this half and half method. 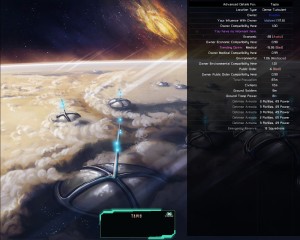 The simulation model used for the species is quite complex and leads to a different game each time you play.

The Last Federation is a fascinating concept from Arcen and there are so many areas where they can take this design with expansions thanks to the 4X backdrop.

This is definitely the most complex game from Arcen and you can tell that there was a lot of care put into this game.

Even after talking to Chris Park for three hours on the podcast, I’m betting we could probably spend another three hours talking about everything in The Last Federation and what they have in store.

The entire game is built on top of a simulation model that governs the growth and choices of each planet which the player can impact, but is never really affected by. Your job is simply bringing everyone together and you don’t care how that’s accomplished. With patches, Arcen continues to add more options for each species, further differentiating themselves and giving you more choices.

I just wish that it was easier to learn so that I could fully appreciate the design. Probably the closest analog to The Last Federation would be a grand strategy title like Crusader Kings and those games also had trouble appealing to people outside of their respective fan base.

While Arcen made a smart move with restricting systems and information, a new player is still assaulted with an entire galaxy of planets, species and options to choose from. Unlike a grand strategy game, you can’t learn it by picking a small nation to play around with.

If Arcen can figure out a better way to explain the intricacies of their simulation, The Last Federation could be one of the deepest strategy games that you’re technically not a part of.