The Wolf Among Us Season One: Huff and Puff

The Wolf Among Us concluded its season lately and leaves some questions answered and raised a lot more. As I said way back in my review of episode one, Telltale has been walking a line between adventure and pure storytelling lately which would leave fans divided on The Wolf Among Us. Having finished the story, I liked what’s there but was left with a feeling that it could have been better.

(The following analysis will be spoiling some plot points of season one of The Wolf Among Us and it’s recommended that you don’t read this until you have finished the season. For people interested in the basic premise and gameplay, you can read my review of episode one.)

With episode five titled Cry Wolf, Telltale wraps up the story as Bigby finally confronts both Bloody Mary and the Crooked Man who have been running Fabletown behind his back.

As far as action is concerned, episode five features a lot more QTEs including several fights and another chase segment. One thing that really has to be mentioned is just how well the cinematography was throughout the series. This really showcases just how far Telltale has matured over the years and delivers with strong visual style, acting and even camera work.

Just like in previous episodes, while certain events will be different based on your choices, the grand story of The Wolf Among Us will come to an end the same for everybody. But I did like how there were more nods to previous choices in this compared to the end of season one of The Walking Dead.

There really isn’t a lot for me to discuss gameplay wise which sets us up to talk about the problems that I had with the series as a whole.

One of the elements hinted at during episode one was having a detective angle as Bigby was the sheriff of Fabletown. However any and all puzzle solving or critical thinking seemed to have disappeared in place of the story just moving along without the player.

This is part of the problem that I have with the story and that is player agency is completely removed. Granted choices that I made did come back and had a small impact, but the story at large just moved on without me. 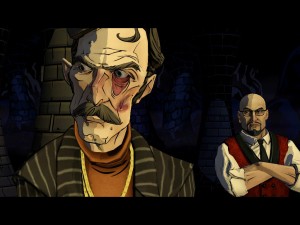 While the story did wrap up nicely in the end, I would have liked more control over how.

For example Toad is sent to the farm no matter what you did and even my big moment when I killed one of the Tweedle brothers was swept under the rug with exception to two dialogues and Snow saying that “we’ll talk about this later.”

The part that felt the most contrived came at the penultimate scene where Bigby and the Crooked Man square off in a battle of wits to prove who was right to the people of Fabletown. Even though it said that I was winning people over he still came back to upset everything, until Narissa walked in to move the plot forward.

It would have been more interesting if the player could have controlled more of how the game ended as opposed to a few side notes. But this is the problem with working on a set IP and Telltale couldn’t do anything that would have upset the canon from the graphic novel. Don’t get me wrong, the plot that Telltale wrote was great in tying up the major points of season one while leaving a door open for a second season.

But I would have liked to see some actual gameplay present and not just wandering from scene to scene. Let me control how the plot progresses and not just have plot points come out of the blue. If there is a mystery a foot, let me try to solve it and find evidence instead of just throwing things in front of me or letting other characters just tell me. 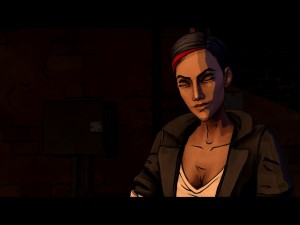 Bloody Mary will probably be the person gamers will remember the most as another example of a great female character.

One last thing was that A Wolf Among Us kind of felt rushed as there was a long delay between episode one and two and it seemed like that episode two and three could have been combined.

Now I don’t know if they were rushed or splitting time between this and the Walking Dead but a lot of people felt that episode two was the worst of the season.

In the end I think that The Wolf Among Us is the strongest game, narrative wise yet from Telltale while bringing up that I have not played season two of The Walking Dead.

But I’m both excited and somewhat worried about the Borderlands pre sequel that Telltale is working on. How much will the player be able to control things or will there be any gameplay? Given the gameplay of the Borderlands series, I don’t know how fans will react to a Borderlands game in the style of The Wolf Among Us or The Walking Dead.

Given how much the company has grown over the years, I would really love to see them work on an original IP. Something that they can control fully and let the player really have control over how things go. If anyone could make a fully interactive choose your own adventure style game, my money right now is on Telltale.

Tags: adventure games, telltale games, The Walking dead, the wolf among us