The Wonderful 101 was the first Wii-U exclusive from Platinum Games and it was oozing with that creative energy that has become the style of the studio. Taking the superhero antics of Viewtiful Joe further, the game goes out of its way to be original but originality does have its downsides.

The story of the Wonderful 101 is that the alien group known as GEATHJERK has invaded the Earth and it’s up to the super hero team of the wonderful 100 to save the world. The leaders of the group are the ones that are designated by color and you start the game as Wonder Red and will pick up other characters along the way.

Gameplay is part Pikmin and part Viewtiful Joe with how combat works. In each level you’ll be joined by civilians who become temporary members with more that you can find during a stage. Making use of your team is done via the right control stick which you’ll use to draw shapes on the screen. Different shapes will correspond to different abilities as well as selecting different wonder members to take the lead.

Whoever is leading will be the one that will attack via the A button and each Wonder member has different weapons such as Wonder Blue who uses a sword or Wonder Green that uses a gun. This is very important as the different members can interact with special objects and situations during a stage like Wonder Red who can pick up and manipulate objects with his giant fist. The more people you have in your mob, the stronger you can make your attacks as well as using them to create ladders and bridges to get across obstacles.

Advanced combat moves involve drawing other symbols during a fight to summon the other weapons to aid you or redraw your symbol bigger to get a stronger version of your weapon to use for a limited time. These actions will drain energy from your Unity Bar which is shown below your health with the bar refilling when not in use to a certain extent.

Because your team members actually combine to make your weapons, taking damage or drawing too many symbols will temporary remove them from use for other attacks or getting around obstacles. But they will recover generally quickly and your members will never be killed during a level. 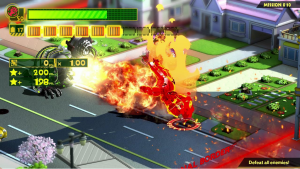 Similar to other Platinum Games’ titles, each stage is broken down into sections where you’ll fight enemies; solve a puzzle or something else which you are graded on how well you performed.

After each stage you can spend accumulated coins to unlock new moves and upgrades and is the main form of progression outside of new Wonder members who are tied to the story.

The game looks amazing thanks to the HD and the vibrant art aesthetic and the game’s music and charm will pull you into the zany world. However when it comes to playing the game, the design gets literally lost in the crowd.

The Wonderful 101 is a bright Technicolor experience filled with super hero antics; however all that also creates a brightly confusing mess that gets in the way of playing. Your character and the mob itself are very small on screen as the game zooms out to fit the larger enemies that it becomes hard to spot where you are.

All the visual effects tend to blend together making it all but impossible to spot things like incoming projectiles or enemy attack tells. Many times I was hit by an enemy who I was attacking as it began its attack animation but I couldn’t see it as the thing was covered by visual effects from my attacks.

Speaking of attacking, the combat system was very clumsy for several reasons. First is that part of the challenge is figuring out what Wonder member to use during combat as some attacks are designed to counter specific tactics. But the game wants you to remember all these details instead of building it into the enemy attacks or gameplay. You may get split second tells when a character flashes on screen, but even then it doesn’t really tell you what that character should be doing.

Another problem is that the game’s rules on defense are not consistent as there were plenty of times where I blocked an attack to only have it still hit me and cases where there were no attack tells to let me know the attack was coming. What’s very annoying was that many enemies have attacks that can’t be blocked and others that you must block without any real tells as to which is which until you get hit by them. Quite frankly it is sloppy game design and reminds me of the issues I had with Bayonetta 2 (which the review is coming soon) and how that game also did not have standardized tells across enemies. 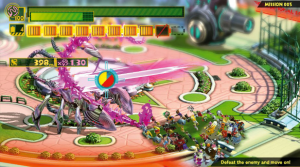 Larger enemies all have little tricks that have to be figured out but their battles due tend to slog on.

Larger enemies have special gimmicks that require the specific use of certain wonder attacks but these enemies still take quite a long time to kill even after you use the correct attack and are just a slog to fight through.

Again, there are very few tells to let you know if you’re using the correct attack or not outside of a few obvious ones.

The sloppiness also extends to the game’s advanced systems. You could select different Wonder members to take the roles of each of the weapon types but for the life of me I couldn’t figure out what was the difference. Characters rank up which also does something mysterious which again a lack of information for the player is the issue. The in game “help menu” is horrible and should have included more information on the different weapon types and about the advanced systems.

The Wonderful 101 does make use of the gamepad with sections that take place only on the pad’s screen(or a picture in picture on your TV,) but the camera becomes near uncontrollable and these sections are more annoying that clever. Speaking of the camera, as mentioned earlier it becomes very hard to spot your character when all the visual effects are going on and what’s worse is that it gets in the way of drawing the various symbols.

The issue is that the camera tends to want to go sideways and not view the ground, but your drawing takes place there and you’re not able to see what you’re drawing. This isn’t a big deal at the start but when you start getting to the advanced patterns it becomes yet another annoying obstacle.

Adding frustration to the formation drawing is when you get access to some of the late game wonder members who feature patterns that can be hard to draw. The problem is that the foundations of each formation are similar to each other which makes it hard to draw the one you need. And the frustration becomes compounded by the problems with the camera sometimes not showing you what you’re drawing.

This is one of those games that seemed hell bent on pushing back on my attempts to enjoy it despite the great aesthetics.

The Wonderful 101 is a game that I really want to enjoy as the gameplay is original, the aesthetics and theme are great and the whole affair has this great energy to it that gets you pumped to play it. But the sloppy mechanics and controls are just too much of a deal breaker for me. The Wonderful 101 is not a horrible game by any means but it could have been so much better with more attention to the gameplay as well as the visuals. 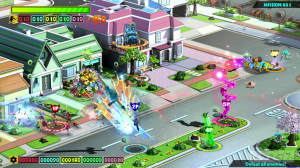 It becomes very hard to see what’s going on when the camera zooms out and with all the special effects flying.

Despite that, The Wonderful 101 is an original game and one I think that definitely deserves a sequel just to give the developers a chance to refine the mechanics and gameplay as this a series that I would like to see more from… both in terms of content and what’s happening on screen.