Vampyr’s Design is as Grey as its Morality

Vampyr is certainly a strange turn for developer DontNod Entertainment. Going from the critically acclaimed Life is Strange series, to a game about being a 20th century Vampire. It’s surprising to realize how few games there have been about being a vampire; the last major one was Vampire the Masquerade Bloodlines. Vampyr may not hit the highs of the action RPG genre, but the pieces are there for what could be a great series going forward.

Taking a Bite Out of Crime:

Vampyr finds players controlling Jonathan Reid; a physician returning to London after serving in World War 1. When he arrives, he is attacked by a vampire and awakens to find himself now immortal. With the city quarantined due to the Spanish Flu, and warring factions of vampires and vampire killers, it’s up to him to save the city, or doom it.

Vampyr is structured around different story chapters, as John tries to make sense out of what’s going on. The game is entirely real-time, with combat that plays out similar to a Souls-like. What separates Vampyr from its contemporaries is how progression, combat, and storytelling, are integrated into the morality system.

Instead of featuring an entire city of nameless NPCs, Vampyr uses the setting of a quarantined London to restrict it to a few dozen. Each person has their own back-story, personality, and social circle within London. Many of the people have side-quests attached, or provide shopping for the player.

The twist is that outside of a few major characters, everyone can be killed via sucking out their blood. Experience is also earned by exploring, fighting, and completing side quests, but the biggest exp bonuses come from “embracing” the people.

You can also improve their blood by finding out about their back-story and curing any diseases they might have contracted. Finding out hints from one character can help you with uncovering the secrets of people they’re related to. Once you kill someone, their story, and any future side quests they might have had, are over. 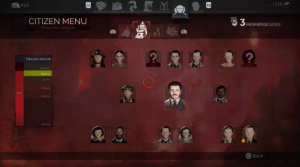 Vampyr’s NPCs all have unique personalities and stories to tell

To keep track of your deeds, each area in Vampyr has a stability rating that goes up and down based on your actions. Keeping people alive and healthy will make their districts safer. If you go full Nosferatu, there will be less people around and more enemies wandering the streets.

Time advances every time you sleep which also allows you to upgrade John. Using your experience, you can unlock new abilities to use in combat and passive bonuses.

As you apply experience anywhere on your skill tree, it will raise your overall level. The level is an abstracted measurement of where you stand against enemies, and you will receive penalties for fighting enemies above your level.

The concept is that being good means that you are going to have to fight the enemies at a deficit, but you can easily overwhelm them if you give in to your inner vampire. The other hard choice comes in at the end of each chapter, where you must decide the fate of major characters.

In between all the monologuing and hard choices, you are going to be fighting in the streets of London.

Vampyr’s combat draws similarities to the Souls-like formula. Health, stamina, and blood, are your three main resources. While your health does regenerate to a point after combat, certain kinds of damage will leave your health bar stunted unless you use blood to recover. Blood is also used to power any of your special abilities; from using shadows to rip your opponents apart, to constricting their internal blood so they can’t move.

The best way to get more blood is to use weapons that cause stun damage to daze an enemy and let you feed on them for a second. Enemies will usually resist one or more types of damage, but it’s nothing too big to get around. 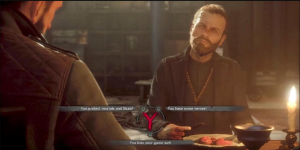 The story is definitely the best part of Vampyr

Every weapon in the game can be upgraded at the hideouts’ crafting station. The choices are limited to one of two bonus perks, and the only reason to upgrade is for the base damage increase.

Enemies run the gambit of other vampires, vampire hunters, and several unique boss fights. Thankfully, I did not run into any bosses who were completely immune to any of your powers.

Vampyr tries to balance these different systems together, but the game just doesn’t quite get it right.

Vampyr’s issues stem from how limited each of the game systems were; either alone or together. Starting with the story and morality, the choices the game wants you to make don’t really amount to much. I did like the overall story and John’s struggle with immortality and the main characters, but the game couldn’t get me to care either way about the regular citizens.

The actual path through the game doesn’t change that much when it comes to the NPCs. The only big choices occur at the end of several episodes and when you have to decide what to do with a major character. With that said, you’re still going to fight the same bosses and do the same quests.

The morality system sounds like a good idea on paper, but it doesn’t really mean much regardless of your play style. Since every task gives you experience, and that is the only allure of killing NPCs, there really isn’t that much of a choice. Most players will probably go all in for good or evil just to see how things turn out. You are not granted any additional powers, mechanics, or paths regardless of your actions.

It would have been more interesting to force the player to feed, and then have them decide who to kill, or just give either option more gameplay implications.

Combat just doesn’t have the complexity or challenge to sustain itself over the course of the entire game. You’ll run out of enemy types and different strategies to try long before the game is over. While it was harder to play the game without killing, that was more due to the abstraction of levels than the gameplay itself. The only new combat power you’ll gain is to choose an ultimate, and you’ll still have a dozen hours or more to play of the game. 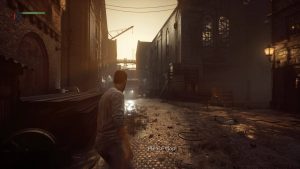 The game suffers from a quality of (un) life perspective

The actual combat feels okay, but there were some clunky elements to it. Enemies routinely could passively track you while in the middle of a multi-string combo. Sometimes enemies would get knocked out of their animation by your attacks, and other times they would gain hyper armor without any warning.

The final set of problems had to do with the general play of the game. While London looked amazing, it was not a pleasure to run through. You’ll have to constantly go between the game’s four sections without any fast travel. While shortcuts do open up, that doesn’t save you from minutes of running around.

The game gets a little too indulgent with all manner of minor items used for crafting. This becomes worse when you have to hop around to the different merchants and try to remember who sells what item. I would have liked an easy way to get people medicine instead of running around a district trying to find them.

And then there were the bugs in the game. I ran into frequent issues of the game stuttering out of control, quest markers not updating, incredibly long load times upon death or entering a new instance and other random weirdness.

Vampyr is a solid start for this kind of design and story. If the developers can refine the systems, or make the experience more streamlined, we could have something worth sinking our teeth into. While it may not be the best game with vampires in it, if you’re looking for the video game equivalent of a B monster movie, then give Vampyr a bite.