Void Bastards is a Game Caught Between Two Masters

Void Bastards is the latest game from developer Blue Manchu and on paper should be everything I love — a FPS rogue-like where you fight and explore derelicts for survival. Unfortunately, it instead presents itself one of the hardest games for me to review, not because I love or hate it, but because I just like it.

The story follows a prison ship that has been attacked and left for dead by pirates. The onboard AI decides to reawaken prisoners one at a time to go hunting for mundane parts that will hopefully save everyone. Right off the bat you can see that Void Bastards has style to spare with its gorgeous comic book aesthetic.

The core gameplay has you exploring a nebula with ships randomly strewn around. Each ship type features a set layout, but enemies, loot, and random events are shuffled. Onboard each derelict it’s up to you to decide how far to explore for essential supplies while the situation becomes more dangerous.

Enemies will patrol around and will engage if they detect you, while gun turrets and automated cameras can cause trouble. You have a time limit in the form of oxygen, and you must leave the ship or refill via the onboard system before you suffocate.

You also need to scavenge for food and fuel which are consumed when your ship goes from one location to the next. Every derelict type will also have parts that you can find and use in the game’s persistent system.

After every mission, you are taken back to your ship, or S.T.E.V., along with any materials you scavenged. The game features an unlock tree that makes use of the parts that you come across. This is where all the options and abilities in Void Bastards come from. Each new unlock could be a new weapon or tool to take onto a ship, or a passive bonus. 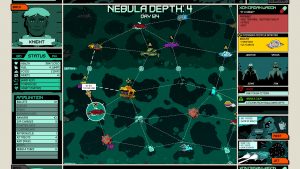 You can use minor items found on each ship to eventually just craft the parts you need, even the mission-critical ones. Most unlocks can be further upgraded with additional parts that permanently improve their utility over the course of playing.

If you are killed, all unlocks remain persistent across characters, but you lose the materials that the character was carrying when they died, and there are plenty of ways to die. The further you go into the nebula, the harder the enemies will become along with new ships. There are events like pirates and void whales that can ruin your day.

I love this loop of exploring the ships for goods and upgrades and growing more powerful over the course of playing. However, Void Bastards is caught between two kinds of experiences, and I don’t think it fully works either way at the moment.

A Game Split in Two

Void Bastards design is set up between two kinds of gameplay loops. On one side, you have the rogue-like elements of exploring the derelicts, trying to find the supplies to keep going, and always reacting to the events that pop up. Then there is the whole campaign of making progress through the story as the only way to get further into the nebula and see more events and challenges.

A typical rogue-like is set up for 30 minutes to an hour long runs, while Void Bastards has a multi-hour campaign structure to it. My problem is that I feel this is a case where the game is less than the sum of its parts instead of more. 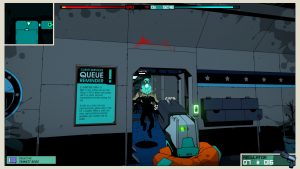 Combat is the weakest part of the game, and you want to avoid direct confrontation whenever possible

The rogue-like elements aren’t strong enough to create variance between each derelict. Because each ship type has a set blueprint, you know ahead of time where you’re going and what to look for.

The game hints that you should skip vessels if you don’t need the resources, but I started to skip them out of boredom in the early game.

This is a game that is easy until it’s not, and then you are in deep trouble. Due to the randomized events and enemy placements, it can lead to unwinnable situations. I had a case where the second I stepped onto a ship, the first room had a turret and pirates in it who quickly closed in and killed me before I could have done anything. Later, you’ll run into advanced versions of enemies, along with greater swarms of enemies and environmental hazards.

There are several ship types where the airlock always spawns you behind one very big room. If that room is full of enemies or security elements, it’s very easy to be taken out before you can even explore the ship.

From a gameplay standpoint, the basic mechanics aren’t that deep. You can run, jump, shoot, and use a weapon, sub-weapon, and tool.  All the interesting dynamics and strategies in the game are tied to your gear/unlock system, but only taking three items per mission puts a real limit on creative solutions.

And that creates further problems as you start running into stronger enemies later. This is not a case where there are multiple solutions to the same problem. Your zapper is the only device that can stun turrets and mechanical enemies; run out, and you’ll be at the mercy of security elements.  Ammo also becomes a factor as enemies will always spawn in and it’s better to run than it is to fight for the most part.

The concept is that you shouldn’t be relying on just one strategy for every ship, but the designs of the enemies and ships will often force certain strategies. The Zeks who have a frontal shield can only be handled a few ways and are dangerous in small corridors.

Combat is the weakest part of the game thanks to limited ammo and just the lack of depth in this regard. Many enemy types are designed to track your motion allowing them to hit you even while dodging. Turrets as an example cannot be dodged at all once they start firing on you. You can see the enemy adjusting its shot based on your movement.

I also didn’t like how despite being an FPS, your shots would not go where you would aim. While having sway is okay in most games, when you’re one shot from destroying a camera or stunning a turret, having it miss because of something out of your control is frustrating.

If you’re hoping for creative solutions to your problems such as in Heat Signature or Prey, it’s going to take a long time and upgrades before you see them. And even then, many of your more interesting toys require ammo, which given the random ship placements can be hard to acquire. I was surprised that given the crafting nature of the game that you couldn’t craft emergency supplies to help you. As we talked about, the fixed designs of the weapons and enemies mean that there aren’t as many creative solutions as I would have liked to have seen.

There were too many situations where I boarded a ship and found myself completely unable to do anything. I was shut down by turrets, cameras, the events, and the enemies. Even with most of the weapons unlocked, I never felt that I could do much on any ship. There were a few items that became my bread and butter go-tos for ships. As I said: the game is easy until it’s not. On my final run on hard mode, a lucky string of ships and the right tool made the ending incredibly easy.

And that takes me to the campaign which is just not interesting enough to sustain the basic gameplay loop. The game always points you to the next item, and then it’s just a matter of getting there.

The map-based movement forces you to move forward and can lead to situations where pirates or ship destroying void whales are on your path and you can’t get away from them.

There are special items like warp keys and torpedoes you can use, but they are rare and it’s up to the randomized map for you to find them.

The game reminds of the issues I had with Rogue Legacy and that its rogue-like elements weren’t interesting enough to sustain a long playthrough. I can see players getting tired and just rushing through for parts and permanent upgrades after exploring the same derelict type for the umpteenth time.  One of the unlocks for beating the game is an iron-man difficulty which may give the game some added spice to the gameplay.

On the Verge of Greatness

As I said at the start, Void Bastards sounds like one of those games that should have clicked perfectly for me, but unfortunately, it doesn’t. If there was any game that the developers should be taking notes from in terms of updating the game, it would be XCOM 2. Void Bastards needs more supplemental content and systems to make not only the derelicts — but each playthrough — feel distinct.

If it gets there, this could be the next amazing action rogue-like, but right now, this space tour feels like it goes on for just a little too long.

What Loot Box Regulation Could Mean for the Game Industry