We’re coming up on less than a week away from the release of X-Com Enemy Unknown: The spiritual sequel to one of the most highly rated PC games of all time. In honor of its release, I decided to attempt to play through and complete the original which I never did at the time.

X-Com is one of those titles that gamers (like me) love to talk about. Analyzing the design is always interesting as not only did X-Com do a lot of original things, but it really was a product of the time.

In the late 80s and early 90s, we started to see games experiment with genres. This was the period where a variety of classic titles appeared, using what I’ve coined: Multi System Progression. Games designed around this, feature several game systems that are separate in terms of design and experience, but are connected to each other through the game.

In other words you have game systems that could have been part of 2 or 3 smaller games, combined into one “Frankenstein” game. Besides X-Com some other notable examples are the Starflight series and Star Control 2.

X-Com’s design was settled in the strategy genre, but the gameplay was broken down into three different systems:

1. Base Management– Creating bases to house your troops, and research and production lines, while managing your income.

2. GeoScape– Track UFOs and bases around the world and send ships to intercept.

3. Squad battles: Turned base fights between your forces and the enemy.

Each system by-itself could have been the focus of a smaller game at the time. But what makes multi system progression so engaging, is how each system flows into the other two:

1. Your base determines what equipment you have for the squad battles and your ships. The more bases you have set up around the world will give you greater coverage allowing you to spot more UFOs and have more squad battles.

2. By taking down UFOs you’ll keep each country happy which in turn means more income at the start of each month. By tracking UFOs you’ll be able to send your squads either to crash sites, alien bases, or landed UFOs.

3. Any squad members that are killed are gone forever which affects your roster. Getting through missions will net you items from the aliens that you can use to research new gear, or sell for more money.

In X-Com you can’t just play one of the systems, due to how they are connected to each other. This in turn makes the gameplay more than the sum of its parts. 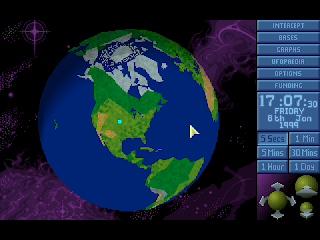 X-Com‘s narrative is different from other games, as it’s both linear and non linear at the same time. To beat X-Com, your mission is to attack and defeat the alien HQ. To do that, required the player to unlock specific researches and capture alive aliens to get the information and technology needed. This part of the game is linear and is required on every play to move through the game.

However, the actual playing of the game is non linear. Enemy attacks are randomized and detecting them is based on your coverage across the planet. You won’t know until you send your troops in what aliens to expect or what you’ll bring back.

The player’s skill at the game effected how quickly the player would get access to the fixed researches and final battle. The better the player, the more that gets recovered from battles and the quicker the player’s squad improves. If the player spends the first few months of game time barely surviving, it’s going to take them longer.

While the player may unlock everything needed for the final battle, they can still hold off on it to prepare their squad. Since the longer a squad member stays alive and contributes, the better their stats became, it paid to have seasoned squaddies for the finale.

The only consideration the player has to be aware of is that the longer they play, the more likely UFOs will attack their bases around the world. Losing every base counts as a game-over and so does losing the final mission.

X-Com‘s other influence besides the strategy genre was RPGs. Specifically Pen and Paper, which is where a lot of the classic CRPGS drew inspiration from. In X-Com every soldier the player purchased arrived with a randomized set of attributes which you can see from this screen shot: 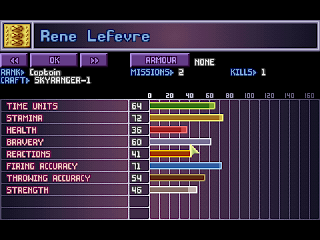 Attributes like time units and shooting accuracy had a huge affect on how well that person was at combat. Even if their accuracy was high, without enough TU, they wouldn’t be able to shoot much, while bravery and reactions had a more subtle effect. Bravery affected how easily it was for someone to panic in dangerous situations. Reactions referred to if you left someone with enough TU to fire at the end of the turn, there was a chance that they would fire at an alien during the enemies turn phase.

Improving your soldiers was one of the more tedious acts in X-Com. Soldiers improved attributes like shooting and reactions by performing those acts. At the end of a mission, the soldiers that contributed the most would get promoted. The higher the rank, gave a bonus to all the attributes of that soldier, including TU. These both made higher ranked soldiers more valuable in a tough fight, and all the more costly if they were taken out.

The only form of soldier improving that can occur outside of missions was developing the person’s psychic abilities. Once you unlock and build the required facility, you can train people to improve their ability to perform psychic attacks and see their defense against them.

The cracks in the base:

While X-Com remains a great game to this day, that doesn’t make it infallible. For newcomers both then and now, the game had a huge learning curve. Someone new had to effectively learn three different games to play X-Com, and this was during the age where in game help was nonexistent. There was also the unintentional difficulty spike with psychic enemies appeared, as you wouldn’t know it at the time the psychic defense rating of your soldiers.

The UI was easily the weakest element of X-Com, which was hindered by the technology of the time. I’ve talked about the problems with the UI in a previous post which you can find here.

While X-Com‘s gameplay was ahead of its time with the multi system progression, the game suffered from bugs and exploits. Expert players knew what the best items to sell were and could easily remove the need to keep the other nations happy, as they were making more money producing items then from the other countries.

Since the announcement of X-Com: Enemy Unknown the question on everyone’s minds is: Will it live up to the original? From playing the demo and watching gameplay videos, I don’t think Enemy Unknown is going to make everyone forget about the original. X-Com is one of those unique games that came out at specific point in the industry that can’t be replicated with a new design. The RPG genre in mainstream design has moved away from a Pen and Paper format in favor of having fewer more prominent stats.

The only way that someone can fully recreate X-Com 100%, is to focus on the same design philosophies from the past and just give it a graphical touch up. That was one of the motivations behind the long time coming project: Xenonauts. At the time of this post, with a little more than a week left, we’ll soon be able to see if Enemy Unknown will be worthy of carrying the X-Com name.