X-Com Enemy Unknown‘s release is special in a number of ways. This is the first official game featuring the brand to be released since X-Com: Enforcer in 2001. But that doesn’t mean that there have been other games that were made. Over the last decade, there have been several attempts at continuing the X-Com brand, and the one that I find the most fascinating was the last one: XCOM, a first person shooter.

From the initial announcement in 2010 the game was met with criticism from fans of X-Com. Not helping matters was when 2K president Christopher Hartmann said that strategy games were not contemporary as the reason for the genre shift. XCOM is a classic example of how a brand can backfire, which is a shame as I’m probably one of the few people who thought that the idea was interesting.

Brand awareness is a double edged sword when promoting products. When done right, it can get a product more acclaim then without it, but when done wrong it can doom a product in the eyes of the consumer before it’s even released.

XCOM was an example of the latter and how the designers and publishers attempted to use the X-Com brand.  The first major problem was calling the game XCOM in the first place. You have to be very careful when designating titles in a brand as the next main game in the brand. If it’s too far removed from the core elements of the brand, it’s going to alienate the fan-base.

When footage of XCOM was released as a FPS, fans of the brand were in an up roar as expected. What was shown had little in common with what the brand represented. The aliens were not recognizable from the game and neither was the setting or design.

It was obvious to everyone that the game was called XCOM just to attract fans of the brand and this backfired. As the developers were then forced over the course of the next two years to convince people why the game should be called XCOM, which is never a good position to be in when developing a product.

I think that if the game was called anything else, even if it was a generic sci-fi title, it would have gone over better. When you start using brand names, you need to understand what made the brand popular. If Nintendo announced that the next major Mario game was an M rated first person shooter, they would need to call in the army to defend their headquarters from angry fans.

A XCOM by Name Alone:

XCOM faced an uphill battle with fans trying to convince them that the game was worthy of the brand. Not helping things was the gameplay, which while original, never really measured up to X-Com. As we learned from previews, players would go out into the world in first person with other agents as backup.

Each agent had special abilities that they could use to aid the player and could be killed if the player wasn’t careful. The player had to try to kill aliens while collecting items that they could research back at the base. As with X-Com the player could upgrade their agents and choose what missions to go on as the alien threat escalated.

“What is unintentionally funny about this situation was how many people believed that if XCOM failed, it would be the death of the brand”

The problem is that all of that was here-say, previews of the game only focused on the first person combat. Even leaked game footage only showed a bare bones base system with very little of the progression of research and troops that made X-Com so compelling.

The nail in the coffin came with one of the final pieces of game-play footage to be released. This one was the most developed in terms of showing game content, but once again nothing that was shown had that X-Com feeling.

The footage had the player using a pause-able squad control interface to move and use the other agent’s abilities. The demo focused on cover based mechanics with the player having to move to engage enemies at flanking positions.

The problem is that not only does none of that measure up to X-Com’s design, but the gameplay itself wasn’t all that engaging. The game had a very basic cover system, in which is being in cover meant that enemies were invulnerable from forward attacks. The aliens shown looked generic along with the geometry shape looking alien ships. 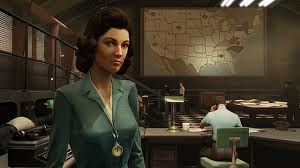 A scene taking place in what would be the “base management” part of the game.

Once again during the demo the designer assured everyone that capturing aliens alive and their tech would have a huge effect on researching new equipment. But as always, none of that was actually shown to calm the angry fans down.

Moved by the Fans, in the Wrong Direction:

In my retrospective piece on X-Com, I talked about one of the main elements to its longevity: the multi system progression. Having control over the base building, world view and squad battles gave X-Com a unique touch. But developing a game to have multi-system progression isn’t something that happens over night. You have to effectively design game systems that are strong enough to stand on their own as separate games for it to work right.

Because of the challenges of multi-system progression, it’s very rare to see games attempt it. The thought of someone trying it in a FPS had me intrigue as to my memory; I haven’t seen any other game attempt that. So for the last two years I always kept quiet as I read people hoping that the game would crash and burn and so on.

But the negative reaction from fans put the developers into panic mode, as they attempted to inject more of X-Com’s design into the game and not continuing to develop what they had. As mentioned, something as complex as multi-system design isn’t something that you can just turn on and off, but has to be designed from the start around.

What is unintentionally funny about this situation was how many people believed that if XCOM failed, it would be the death of the brand which as we all can see in less than a week didn’t happened. XCOM is one of those games that could have turned out in any number of ways, which there is now a rumor of it being released as a $30 downloadable title. At this point it’s anyone’s guess as to what affect XCOM’s failure had on the development of Enemy Unknown, but here’s hoping that it will make the fans happy.

One Road at a Time: A Look at the City Builder Genre