How Getting Over It Introduced The Positives of “Jank”

I recently had a great conversation with Tomo Moriwaki as we do every month on my YouTube channel. For this one, we spoke about Getting Over It with Bennett Foddy and the novelty of “jank” videogames. While these games have a far smaller market compared to mainstream titles, there is something to be said, and studied, about games that go all-in on a singular concept or game design.

Jank is a term that can mean different things depending on what we’re talking about. For many kaizo games that are about perfected precision, jank is often referred to when sections require luck or something unpredictable to have a chance at winning. For the purpose today, we’re going to talk about jank in the form of something designed to be purposely obtuse or cumbersome. This is the opposite of the AAA iteration and polish we see from major studios — a company like Nintendo or Blizzard would do everything they can to remove jank from their games.

What we’ve seen from the indie space has been this exploration into “unique” game systems and controls. Titles like Getting Over it, Receiver, Jalopy, Fear and Hunger, Jump King, Pogostuck and I’m sure many more that I haven’t heard of yet. Each game takes something that is often very basic in other games and expands or conflates it to extreme measures. None of the games mentioned would be considered streamlined or feature refined gameplay.

Instead of focusing on making things easy to learn or play, these games are about the intimacy of doing something complicated, or as Tomo put it: “adding more words” to the mechanics. It would be easy to assume that janky games are just badly designed, but this discussion gets at the heart of game analysis.

In a previous post I spoke about my method of analyzing videogames and how they differ from traditional game reviews. A major criterion is if the intention of the developer comes through successfully with the game, which is different from just saying a game was enjoyable or not. From the indie space, I have played many games at this point that aren’t “fun” or “enjoyable” to play but were not designed incorrectly. I’ve described these games as being “explicitly built” to be this way. Again, this is not the developer making something and not having a clue as to what they were doing but knowing exactly what they wanted to design and achieving that goal.

Designing a game to be intentionally janky is a lot harder than it sounds, and where I feel novice developers may mess up.

So far in this piece, it would be easy to assume that a bad game is just a janky one with purpose, but that’s not our goal. The difference between the games in this piece and titles that didn’t work comes down to what the core gameplay loop was. When we see games that have bad UI, frustrating to enjoy elements or a core gameplay loop that doesn’t work, that’s not a janky game, that’s just a bad game.

The titles that work were laser-focused on a specific market or gameplay style, and do everything they can to get the player to enjoy that gameplay. In another piece I spoke about pain points as elements in a game that distract or reduce the quality of the core gameplay loop, janky games may be hard to play compared to contemporary examples, but they should not have pain points. It may be painful to play the game, but it shouldn’t be painful to experience it. Speaking of which, let’s talk briefly about what could be a AAA example of a Janky game.

As we talked about why the games mentioned in this piece work at some level, it reminded me of my thoughts about Death Stranding and I had an epiphany about why that game didn’t work in spite of very much being an example of jank. The problem that the game has is that it’s just unfocused on where the mechanics need to be complicated, and where they need to be streamlined.

The games we’ve mentioned in this piece all share one thing in common: They each focus on one aspect and stuff that with jank. One part of their design gets overly detailed which becomes the focal point and reason for playing. The goal isn’t to make the game annoying to play, but to complicate and get in-depth about a single system. 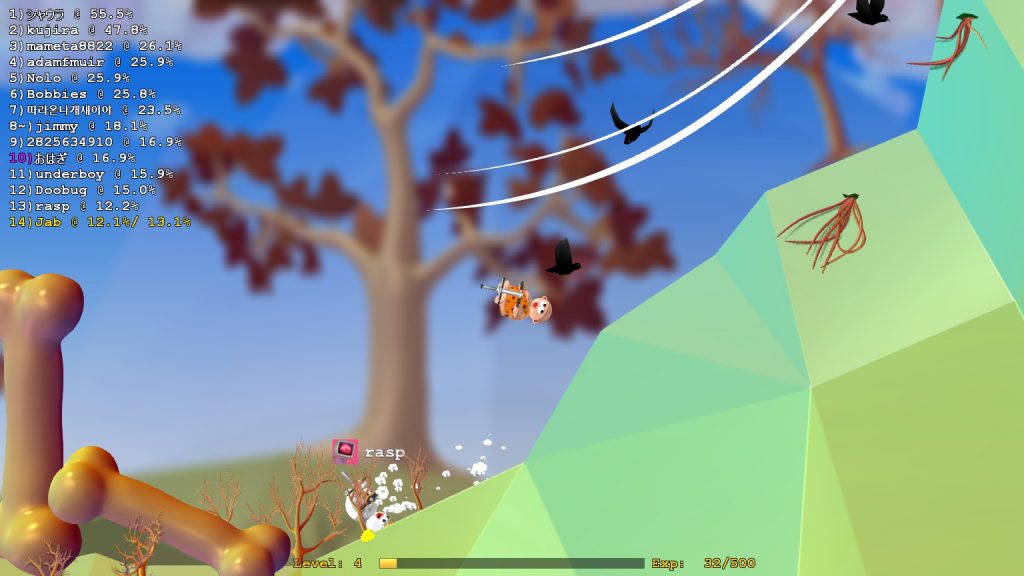 In my review I talked about how a close analog to that kind of gameplay loop that worked would be something like the Spintires kind of design. Games like Mudrunner have jank to them in terms of how driving works, because that’s the focus of the experience. Nothing else about the UI, the tutorials, or the goal of the game is hard to follow. Death Stranding is more concerned with its cutscenes to sit down and decide just what the core gameplay loop is supposed to be and focus on that element.

And that’s where the difference between good and bad jank comes in. The games that work use jank to create one compelling gameplay system and know not to go beyond it. Where games end up failing is when the jank interrupts or gets in the way of the core gameplay loop.

Now comes the big question: Can you market janky games? The titles mentioned at the start have hardcore, but niche, fanbases. Games like Pogostuck and Getting Over It have been called “rage games” which means they’re limited in terms of appeal.

I would place janky games on the same spectrum as Kaizo games — the design is so laser-focused that they’re not going to be mainstream successes. I could never see a company like Nintendo make a janky game, as their entire philosophy is the opposite of jank.

Within the YouTube/streaming circles, a new rage or jank game seems to take root every few months, but none of them have come close to the success of Getting Over It, and that’s an important point. When we talk about overnight successes or surprise hits, it’s important to consider whether or not the design was the reason, the name behind it, or a combination of the two. This also gets at the heart of the topic about developers who try to copy other designs in an attempt at a “gold rush” situation, but that’s a point for another time.

The whole concept of jank offers developers an opportunity to experiment with something different and provide indie developers with another way to stand out from the pack. Just remember that there is a huge difference between making the next Getting Over It or the next Goat Simulator.

To end on, can you think of other examples of “jank games” either positive or negative?