A few months ago game designer David Cage made a bold statement about the state of the game industry. One of the areas he talked about was that in order for video games to evolve as a medium, we need to take more inspirations from the film industry.

Ever since the Playstation era, games have been becoming more cinematic and we’ve seen a number of games that are more about storytelling and theme than gameplay. However there are a few kinks in David Cage’s plans and why there is a limit on how much film can have an effect on game design.

Any medium that is trying to tell a story has to understand how the pacing of their story would work. You don’t write a book that is just 900 words of fighting in the same way that a video game can’t be nothing more than a four hour cut-scene.

In order for a story to work there needs to be a set pace much like how someone designs a horror movie or game. The quiet moments are just as important as when you’re running for your life or fighting the big-bad.

Valve’s method for storytelling in the Half-Life series is an example of good pacing. Playing the game, the player will have moments of action packed excitement, exposition with friends, or one way conversations with people. The important element is that Valve designed the game in a way that it keep pushing the player through these events without it feeling completely manufactured.

You as the player will run for your life when the Combine raid at the start because you don’t have a weapon at that point. Or you’ll listen to characters talking about the situation as they are working on moving you to the next area.

Of course we have to mention that another aspect of Valve’s storytelling is the silent protagonist which does hurt the player becoming invested in the main character. Instead, we’re supposed to project ourselves into the game using the protagonist as a cipher.

While video games and movies do share the concepts of pacing and narrative, there is an inherent limit on how much impact the narrative can have a game.

I know that I’m going to shock everyone reading this with the following statement: video games are meant to be played. Now that you’ve have recovered let’s expand on that. At the end of the day the success of a video game comes down to the interactions of the player.

A huge difference between a movie and a video game is that the audience (IE the player) controls the pacing of the story through interacting with the game, as opposed to a movie which is a passive experience.

And when pacing/narrative and gameplay start to the clash with each other this has led to me coining a new phrase:

Narrative Dissonance: When the game mechanics directly clash with the narrative and pacing of the title.

Narrative Dissonance has been an element of the video game industry for as long as we have been making games. Every time a game mechanic is never explained, or the player has to suspend their disbelief at how something works is an example of it.

One of the oldest tropes is the RPG standby: The big-bad boss is going to destroy the world and you must stop it now, but you can spend five hours completing side-quests first.

When it comes to mistakes designers make, narrative dissonance is on the low end of the scale as video games by design require the player to suspend some belief. No one argues how Mario transforms into different forms of himself or a character in a Call of Duty game can recover from gun-shot wounds by hiding for a few seconds. 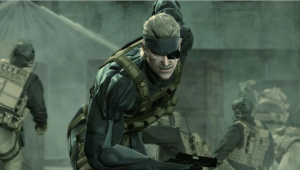 The Metal Gear Solid series is known for having long cutscenes that affect the pacing of the game to tell its story.

However, narrative dissonance can affect the gameplay if the conflict is very noticeable in a game with a strong narrative.

One example from Bioshock Infinite: there was no narrative reasoning as to why more enemies weren’t  using vigors against the player.

In my post on world building, I coined the phrase “just so happens” to describe when the world narrative was not developed properly. With narrative dissonance we can slightly adjust it to: “just because.” If as a designer, you’re only explanation for why a certain mechanic exists or design decision is “just because”, that means you have a loose element in your game.

Now, with titles that aren’t built around narrative, it’s not a damning situation to have narrative dissonance as mentioned with the Mario example. But for games that are attempting to tell an amazing story, you want to avoid having your narrative messed up because of it.

Bringing this back to David Cage’s argument and the design of his studio’s previous games, creating cinematic games: where the player’s prime focus is on the narrative looks like a good idea on paper, but this is usually code for “cut-scene driven gameplay.” While cut-scenes are great to help the pacing and structure of a story, no one wants to play a game where the majority of the game is watching it.

“But remember that first and foremost, a game has to be interacted by the player.”

An example of often criticized game design follows the structure of having a cut-scene after every battle or every few minutes and taking the player out of the experience of playing it.

Another classic game trope is having the in-game character be better in cut-scenes compared to when the player is actually controlling them. A great example is from Devil May Cry 3, where in the very first cut-scene Dante is skewered by minor enemies and instead of dying, doesn’t even flinch. But then when the player controls him, the health bar shows a different story when they get hit.

The games where narrative dissonance isn’t noticeable are when the story isn’t the focus. Games like Din’s Curse or Drox Operative buck the trend of the static world and instead feature a dynamic world.If a quest tells you that someone is about to do something bad unless you stop them, then you really do have to drop what you’re doing or face the consequences.

The actual plots to both games are fairly simple and are more or less framing devices for the gameplay.

The best way of avoiding narrative dissonance may sound a bit odd. You as the designer have to come up with the lore or reasoning as to why the world of the game works as designed. Or in other words: You have to create imaginary rules for a fictional world.

This may not sound like the best use of someone’s time, but in creating a plausible set of rules can help in making the game world stronger. And you may never know where a new game mechanic may come from while defining how your world works.

Remember, it’s not about setting real world constraints on your game, but defining how the world itself works.  You can have a world where everyone flies around on magic ostriches fighting mutant donkeys and as long as you explain why that it is going on in the context of the world then the game is stronger because of it. 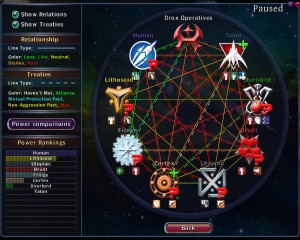 Drox Operative may not have a grand sweeping plot, but the game was designed to provide a variety of adventures.

For a non-game example — the animated series Avatar: The Last Airbender took place in a world where people could control the natural elements.

Each nation lived in a different part of the world and had a dress code, architectural style, combat and culture.

The series used real world martial arts and culture as a springboard to develop the unique setting and world history.

As game technology continues to improve, so does the allure of creating games that can stand on par with major motion pictures. But remember that first and foremost, a game has to be interacted by the player.

At the end of the day it doesn’t matter how emotional or developed your story is, as without gameplay, all you have is a movie that requires you to press enter to continue watching.