In the past I’ve talked about progression in game design by defining it as short-term and long-term. Where short-term represented minor or constant changes like new equipment. And long-term were major changes that affected how the player continues to play such as runes in Diablo 3.

However we can further break down progression based on the amount of control the player has over it and as always, there are specific advantages and disadvantages to consider.

In many games with RPG elements these days, the player is given control of how their character is developed. This could mean everything from what skills to have active at one time, or in what order upgrades become unlocked.

Basically the player knows at any given time a good idea of what they’re going to unlock next and how to get it. Even in a RPG with randomized loot like Diablo 3 or Din’s Curse, the majority of the player’s abilities are based on what skills they have access to, with said skills based on leveling up.

Giving the player a time-frame for when they are given new toys to play with is a popular motivation mechanic to keep people playing a game. Who here while playing a MMO or RPG has ever stared at their experience bar after a fight to see how much of it filled up?

With open world games built around upgrades, the time-frame is relative, based on how quick the player pursues the required elements. But the player still knows that they can become stronger if they kill X enemies or gather Y items. 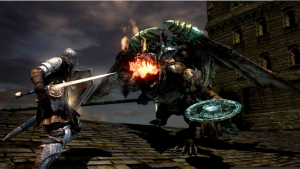 All equipment in Dark Souls was set and finely balanced, allowing players to personalize their gear and attack style.

The advantage of giving the player control of the progression is that it can make the character become personal to the player.

As the player is in control of how their character develops.

As mentioned, it is easier to motivate players with set goals or a check-list, as opposed to telling them that they “may” find something useful while playing.

From a design point of view, knowing exactly the upgrade paths and choices the player can make over the course of playing, makes it easier to balance the game out. For example: If you know that by the first boss fight that it is only possible to acquire more health, then you don’t want to make that fight require additional upgrades.

Many designers don’t sweat the details with an upgrade system and instead balance the game around a loose play-style: someone who plays the game and not focusing on getting every upgrade. That way the people who do try to get them all will notice that the upgrades paid off without punishing those that didn’t.

While having set upgrades makes it easier to view progress, there are several issues to be aware of. By having a completely rigid list of upgrades for the player to find, means that there are specific actions and limits to what the player can accomplish. Meaning that anything not relating to progression seen as wasted time.

If the only way for the player to become stronger is to kill 10 red enemies, then spending the next two hours fighting nothing but blue enemies will seem like a waste.

What’s worse is if you have tiered progression that requires the player to complete X before Y begins to count. What ends up happening is that the player will likely perform both X and Y actions at the same time, but only the X actions will count. This was frustratingly seen in Red Dead Revolution with the hunting side quests that required you to kill specific animal types in a set order. 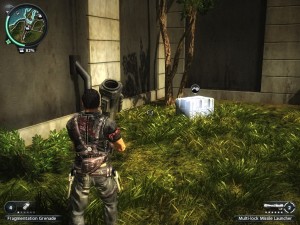 Even completely open world titles like Just Cause 2 featured set progression in the form of upgrade crates. But this created a limit on character improvement.

The other problem with set progression is right in the name: there is a set number of ways for the player to improve.

Once the player has reached max level, or found all the upgrades, there are no other ways to show meaningful improvement.

In Diablo 3, so much of the character progression and abilities were based on unlocking new skills and runes in contrast to equipment.

After the player unlocked the last rune, progression grinds to a halt with the only area of progression left are random upgrades. There was also the fact that set upgrades also meant a linear path through the game, making repeat plays less interesting.

When there is nothing more to look forward to or the goal post is placed too far away, most people will see this as the time to stop playing. This is where providing variable upgrades comes in.

Knowing when and how upgrades will happen can provide steady motivation for playing, but random upgrades can be a good surprise.

As we mentioned up above, randomized upgrades can co-exist with set upgrades, but for this category we’re going to talk about games where they are the primary means of improvement.

Not counting Diablo 3, most ARPGs give the player a wide variety of randomized equipment to build their characters from. This equipment can have a noticeable affect on the player’s play style from that point on. Such as giving a warrior life steal, or creating a build around using ice weapons to freeze enemies. 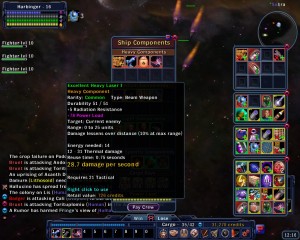 Drox Operative featured a variety of randomized equipment designed to alter your play style based on what you have equipped.

While Borderlands 2 did feature set upgrades in the form of skills for each class, the main form of progression came from finding new guns with wildly varying differences in abilities.

Changing guns could have a huge impact on your style of play: such as switching from an assault rifle to a shotgun.

The fact that you never know when a new item will appear can be as motivating (if not more so) as knowing how much experience you need for the next level. With randomized progression, there is a lot more replay ability as you know that there isn’t a set limit for how powerful you could become.

In terms of design, games built around randomized progression are more open compared to set progression, both in terms of upgrades and the general path through the game. The player is usually given a wide variety of weapons and possible strategies, as the game has just as many different enemies and situations.

If the game has enough variety in terms of modifiers and different equipment, with enough stat tweaking you could have a game that goes on for a very long time. If not infinitely with a consistently rising curve of equipment quality and danger.

However it’s time to talk about the problems and there are several big issues that can happen. First is that it’s hard to personalize a character when everything that makes up their utility is random. If you like using one specific weapon or style, it can be disheartening to be forced to use something else on account of only finding upgrades of a different type.

While having random upgrades can be motivating by the fact that you never know, it also means that you have no idea if you’ll get any upgrades. Equipment upgrades are meant to be short-term as you want to be consistently getting better gear the more you play. But if you’re going upwards of several hours using the same equipment, then there is a problem.

Another problem is if the power curve increases too slowly over the course of playing. In this case the player will find a lot of side-grades, but not a lot in terms of major upgrades to their character. I had this issue with the Torchlight series, as I had to keep stopping and starting after each fight to check the minute differences between equipment.

Finally the big issue is that game balance can be very tricky to pull off when the designer has no idea what the general power level of the player is at anytime. As with Diablo 3, the designers went overboard with the initial inferno mode settings and they weren’t balanced around the relative range of equipment stats that were available to the player.

Or in Borderlands 2‘s case: you may come to a section that was easier with a specific weapon or damage type, but you may have not found the specific type relative to the current threat level. 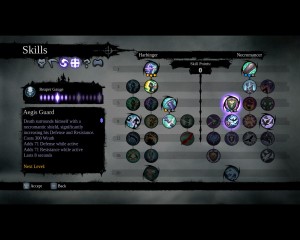 Many action titles these days feature RPG mechanics but when not balanced properly, can lead to frustration.

What’s worse is if the game features set battles or situations, but with randomized equipment.

What usually ends up happening is that either the fight will be so easy because the player found stronger equipment, or it will be frustratingly difficult due to lack of upgrades.

Deciding what kind of progression you are going to use is a pivotal decision and one that will affect everything about the design of your game from that point on. It’s better to fully commit to either one or the other, or a combination of both early on and stay the course.

Defining all areas of progression in a title is like building the foundation of a house: if you alter it once the building begins to go up, the whole thing could come crashing down.