The term: “white whale” is commonly described as someone’s insurmountable challenge: Something that we can’t conquer, but can’t stop trying. For me, my current video game white whale is the title: SpaceChem.

A little over two years old, and I just reached the fourth planet. SpaceChem was a brilliantly designed puzzle game that I simultaneously love and hate.

The plot of SpaceChem which was discovered through solving the puzzles was that you were the newest recruit for the SpaceChem Corporation: the leading manufacturer and shipper of chemicals in the known Universe.

Your job revolved around reactors: massive buildings set up to receive basic elements and combine them into new compounds. To do so, you set up the programming and paths of waldos which interacted and moved the elements through the reactors.

In each reactor you had two different waldos: blue and red. Each waldo followed a corresponding colored path and would perform tasks that matched the same color. Each reactor also had two input sides and two output sides, obviously the elements came in from the input sides and you had to place the correct compounds on the output sides.

What was interesting about SpaceChem was that the game started out both simple and complex at the same time. At the beginning of the game, the puzzles revolved around working in single reactors and taking the inputs and producing the correct compounds to be outputted. 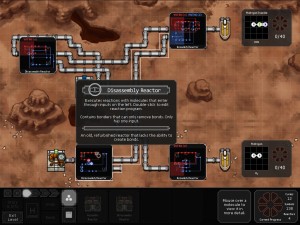 Puzzles with multiple reactors upped the challenge and required the player to think on a grander scale.

The majority of commands that you could give the waldos were available from the get-go and you were free to use any of them to solve the puzzle.

The difficulty of SpaceChem’s puzzle design was very different from traditional puzzle games and I’ll be coming back to that in a minute.

After you had several opportunities to work with the reactors, the game changed up the formula. Now you were not just running the production of one reactor, but multiple reactors .

In these levels you controlled the supply chain of elements from their storage tanks, to the reactors and finally to the spaceship awaiting pickup. Then there were special levels where you had to deal with an enemy using buildings on the map and the chemical resources available.

What made SpaceChem so intriguing was the depth that was under the surface. From the outside SpaceChem was a science fiction game that taught chemistry, but in fact it was a puzzle game that was about the building blocks of programming and that is where my love-hate relationship came into play.

To understand what made SpaceChem different from a traditional puzzle game we need to talk about a game that had a similar design philosophy: Dark Souls.

Games like Dark Souls featured a different kind of difficulty that I wrote an article on a few years ago. Subjective Difficulty is where the game’s overall difficulty is based on the player’s skill level, as opposed to any in-game bonuses or unlocks.

A typical subjective difficulty game is where the player is given a variety of abilities and mechanics from the start and is challenged by learning the proper ways to make use of them. While the game’s challenges remain static, it is the player’s knowledge and skill that grows over time. Normally these types of games are harder at the start but become easier as the player’s skill level increases through play. 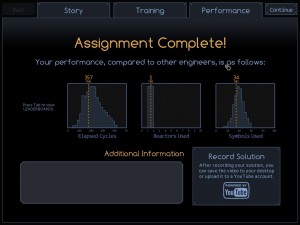 Sometimes it can be crazy to see how your solution compared to other people.

Going back to SpaceChem, it is one of only two puzzle games that immediately came to mind that were based around subjective difficulty design.

The other being the horror-puzzle game: Catherine.

In a typical puzzle game, the early puzzles were easier because the designers started the player off using the absolute basic mechanics to solve easy solutions.

These puzzles always have just one solution and are meant to slowly introduce advanced mechanics.

SpaceChem was different; here the majority of commands for reactor control were unlocked from the beginning. While the first set of puzzles were easy in the sense that they had simple outputs, the solutions could be anything but. The big draw of SpaceChem was that the puzzles were not linear affairs: they may have had a set output requirement, but the solution was up to the player.

Every solution was graded on the number of reactors used, number of symbols (waldo commands) and time it took the reactor to run. It’s not about my solution being any more or less “right” than yours, but how efficient.

This also made discussing puzzle difficulty, difficult as it was subjective, based on the player’s skill. While I had trouble with planet 3’s puzzles and stuck on planet 4, there are a bunch of people who breezed right through them.

What was amazing about SpaceChem was how much your solutions could change based on your acquired skill level. One of the more advanced commands: Sync, allowed you to stop one waldo, until the other one ran into their color sync command. It sounds simple to use but it opened the doors for advanced solutions.

The problem with SpaceChem was that while it was one of the great examples for the positives of subjective difficulty, it also showcased the problems with it. Because the difficulty curve of the game was based on the player’s skill and nothing more, it made getting stuck at a part even harder to get past.

In a traditional action game with or without subjective difficulty, the player can use cause and effect to learn how to win. Or if someone is trying to hit a bulls-eye in real life they can adjust their aim after each shot to eventually hit it. 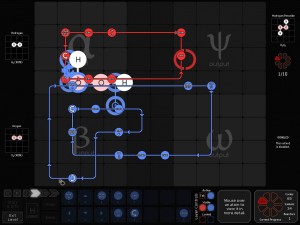 Puzzle solutions eventually became more complex, but the player was free to use whatever solutions they came up with from the start.

But SpaceChem’s design like developing a computer program was binary: either the program worked or it didn’t and there was no in-between.

If the solution you came up with base on your knowledge of the game didn’t work, the game offered no additional training or tips to help you.

In fact because of how SpaceChem assumed that you were building your skill level with each new puzzle, it was one of the few puzzle games where looking up the solution was not recommended. Failing to learn the concept for one puzzle could come back to bite you when it was used later on in an advanced form.

Can I ever beat SpaceChem? And what game will replace it if that ever comes to pass? I don’t have the answers yet to either, but if you have your own video game white whale taunting you, feel free to talk about it in the comments.