The Uphill Battle of UPlay

Over the last Steam sale I decided to buy Farcry 3, and that purchase went from joy to annoyance when I discovered that not only did it require UPlay, but it forcibly installed Punkbuster on my computer even if I had no intention of playing online.

UPlay has been facing negative reactions from gamers since its launch in 2009 and depending on who you talk to, is worse than Origin. For today’s post, we’re going to take a look at this system and why the few things it does well are overshadowed by the negatives.

Let’s begin with the positives as sadly there isn’t much there. UPlay was the first and still only digital client that tied rewards to achievements. For almost every game on the UPlay service, they have your regular selection of achievements and a special grouping that you can see from the UPlay menu.

The UPlay reward achievements follow the same pattern: One or two for the early game, one for beating the game and one for doing something special. These achievements reward you with UPlay points (not sure what their official name is) that can be used to unlock content both in and out of the game.

For instance, soundtracks from Far Cry Blood Dragon, decorations for Anno 2070 and so on. These points are universal to the account and can be used for any game that has rewards for them.

When UPlay was first released, it went a step further than Steam did with its always online requirement: kicking anyone off of any games they were playing if the connection was dropped. As you can tell, not the best first impression and this was perhaps the most publicized problem with UPlay.

Since then, Ubisoft was smart enough to finally rescind on that and now games just require a single online check before starting. However, Ubisoft is still way behind compared to Steam in one critical area: Only having one form of DRM. 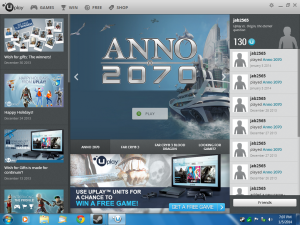 UPlay boasts a slick interface, but lacks many of the features that helped made Steam a success.

When Steam was first released and Valve didn’t have the clout it does now, developers used secondary DRM programs like Securom, Starforce and others on top of Steam which itself was a DRM program.

Today, Steam has proven itself to be the friendliest form of DRM and most developers just use it and no other DRM programs.

However Ubisoft has not caught up yet and many of their games still use secondary DRM programs, such as the Anno series, Farcry 3 and others. Meaning for people who buy Ubisoft games from Steam, they can have at most three different DRM programs running at once for a single game.

The big problem with UPlay is that Ubisoft has failed to grow UPlay as anything more than an arbitrary step to playing PC games. The limited store and lack of quality of life features does not give the impression of a viable digital client for playing games.

There have only been a few times where UPlay featured a sale better than other digital stores and even then, they were only limited to Ubisoft developed or published games. And Ubisoft does not have the quantity of games that Origin has, nor the big name brands. 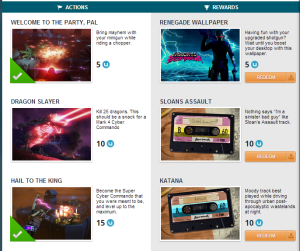 Tying achievements to rewards is the only real advantage UPlay has over other digital clients.

Comparing Ubisoft to EA, EA beats them with market visibility thanks to having major studios like Dice, Bioware, EA Sports and so on.

And that’s a shame as Ubisoft has published some great games; however they are more on the niche side like the Anno and the Settler series.

Farcry 3 and its standalone follow up Blood Dragon were probably the two most visible games on the client.

And while they were both well received, neither of them could be considered on the same level as Team Fortress 2 or Mass Effect in terms of convincing people to install the respective client.

Now for the tough question: Is UPlay salvageable as a digital client? In its current form, I would have to say no. The only positive feature that is unique to UPlay is the achievement system, but that’s not enough to sell a limited digital store on.

Ubisoft needs to ask themselves what they want UPlay to be. Do they want to compete with Steam, Origin, GOG and so on in the digital store front? Or do they want to create a unified game client like Blizzard with Battle.net.

If it’s the former, then they need to find a way to attract more companies to UPlay and either figure out a way to capitalize on their reward system, or remove it entirely. UPlay is also extremely lacking in terms of Indie presence which could really add some quantity to their selection. And let’s not forget the simple of act downplaying the DRM.

If they want to go the Battle.net route, then they need to transform UPlay into its own digital client, copy protection and multiplayer architecture.

Regardless, they need to find a way to make their rewards more noticeable and attractive to gamers. Steam with their trading cards have become popular both as a means of collecting and for selling for real cash. This once again leaves Ubisoft behind with their digital store.

With the ongoing news of Games For Windows Live’s impending death, we will soon be seeing UPlay and Origin jockeying for last place. And something tells me that it will be UPlay that will take the bottom spot thanks to a small catalog and not having anywhere near the studio presence that EA and its developers have.

And if UPlay doesn’t do something soon, it may go out with an even smaller whimper than GFWL is doing.