No Man’s Sky is the game that keeps on giving. Since its initial launch in 2016, the devs behind Hello Games have been on fire, constantly pushing out new updates that expand the game’s already expansive boundaries.

One of the more challenging ways to play the game is through the Survival mode.

When players first start a new save in No Man’s Sky, they have to decide which difficulty setting to play on. This decision determines how the player will have to manage resources, account for hazardous planetary conditions, and how impactful death is. The second highest difficulty, Survival, is for players that want a slightly more challenging experience. So, if you’re going to test your mettle in No Man’s Sky’s vast universe, here’s everything you need to know about Survival mode.

When players first start a Survival playthrough, they find themselves on a hazardous planet far away from their starting starship. This requires them to carefully manage resources as they locate their ship and then perform the necessary repairs for it to take off from the planet’s surface.

These conditions are even more complicated because of how Survival mode increases the game’s difficulty. One of the most significant impacts of Survival mode is decreasing the number of resources that spawn in the world. This makes players have to explore more to find resources, requiring players to use the resources they gather more wisely.

Intelligent management of resources is critical because Survival mode also increases the lethality of hazardous planet environments, hostile creatures, and sentinels. This means that it is pivotal for players to maintain their resource reserves to keep gear charged up and to deal with everything that wants them dead.

Perhaps the most punishing aspect of Survival mode, however, are the consequences of the player dying. If players die outside their ship, they lose all of their inventory and cannot retrieve anything. After dying, players will also have damaged some of their suit technology, which will require precious resources to repair.

If players die while they are in their starship, they lose both their suit and starship inventory. Since their starship was destroyed, players also spawn on a nearby planet after a crash landing. In these situations, players will spawn away from their ship, just a short distance. Similarly to the start of the game, however, the ship will be in dire need of repairs that prevent players from taking off and returning to their business until they are completed.

If you’re looking to start a No Man’s Sky Survival mode playthrough, there are some things that you can do to help you have the most fun with it.

Right from the start of your playthrough, I recommend making a habit of scanning every new thing that you discover and then uploading them all at the end of your play session. This will give you thousands of units over time, which will help you afford the increased prices that come with playing Survival mode.

As you explore planets, you should also pay special attention to Oxide deposits. These are marked with yellow icons and control metals such as Titanium, Zinc, and Iron. All three resources are used for plenty of useful crafting and upgrades, but they also can be used to recharge your suit and starship’s protective systems, which is an absolute must. Keeping your suit’s Environmental Protection systems charged will allow you to explore planets to find the more scarce resources more freely. 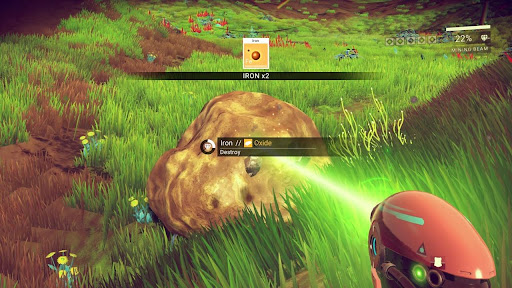 Keep an eye out for precious Oxide deposits.

While exploring, you should also take special note of any caves that you find. Not only are they fantastic sources of resource deposits and valuable Vortex Cubes, but they can shelter you from hazardous environments. If you’re on a planet with hazardous storms going into a cave to wait it out can be an absolute lifesaver.

If you aren’t particularly well versed in No Man’s Sky before starting your Survival playthrough, you should also know how to talk to aliens. Until you get enough experience to learn the languages of the different races spread throughout the galaxy, you won’t be able to understand them. You will be able to read what your dialogue choices are, though.

So, when you talk to aliens, I highly recommend picking the most expensive or risky-sounding options that you can, regardless of whether or not you can understand what they are saying. These dialogue options net the best rewards for the interaction. So, if you can give away resources or donate them make sure to give the best you can. If an alien wants to do something weird to your brain that you don’t entirely understand, just say yes and go with the flow. Failing to do so won’t lock you out of any unique rewards, but the rewards will help make your time in the game easier.

Question: Can you change the mode of save files in No Man’s Sky?

No, if you want to play a different mode, you will have to restart with a new save and select the desired mode.

Question: How long does it take to beat No Man’s Sky?

The playtime aggregator site How Long to Beat says an average playthrough will take players 30.5 hours. However, your individual playtime will vary depending on much you enjoy exploring the game’s worlds and systems.

Question: What is Survival mode in No Man’s Sky?

Survival mode is a difficulty setting for No Man’s Sky that decreases the spawn rate of resources, increases the damage dealt by hazardous environments and enemies, and makes death slightly more punishing for players.

No Man’s Sky’s Survival mode is not for everybody, but it is a fun way to play the game for those looking for a bit more challenging. If that isn’t enough for you, the game also has a Permadeath mode that adds the stakes of deleting the save if the player dies a single time. If it becomes too disruptive for your explorations, you can also play the Normal or Creative modes for a more fun and relaxing experience.

By Jerome Morris — A gamer geek fascinated by scripts and dialogues that turn a good game, into an amazing one. Freelance game writer, and dialogue fanatic currently working on developing experiences in the gaming industry

The Problems With Indie Horror