If there is one ongoing criticism of Nintendo, it would have to be their resistance to developing new properties. Over the decades they have built up a core stable of characters and IPs that they tend to keep developing games for.

But when they do decide to try something new, more often than not it is usually when we see the best from the house of Mario: From Luigi’s Mansion, SuperMario Galaxy and today’s game — Pikmin.

Pikmin was supposedly conceived by Miyamoto while tending to his garden, which of course led to a number of jokes about what kind of garden.

The story was about captain Olimar: An alien astronaut on his way back to his home planet when an asteroid collides with his ship and he crashed on Earth. Unfortunately Olimar on our planet was about the size of a bug and Oxygen was lethal to his people.

With only 30 days of breathable air left, the player’s mission was to recover his spaceship parts and blast off for home before time ran out. Aiding both the player and Olimar were Pikmin: tiny plant-like creatures who obeyed Olimar’s command.

The Pikmin came in three colors: Red, Yellow and Blue each with different abilities to help the player. The Pikmin were controlled using the on screen reticule and would perform context sensitive tasks based on what they were commanded to be interacted with.

The player could order Pikmin to bring back defeated enemies or special tablets back to the Pikmin’s home which was a mini ship which would then spawn seeds and more Pikmin.

The challenge of Pikmin involved the time-limit the player was on for each day. The player could only explore each area during the day and would have to leave when night came and enemies swarmed the area. 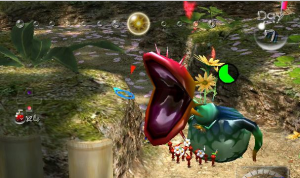 Enemies always towered of the player, requiring the player to command the Pikmin effectively.

This left the player with only about 10 to 15 minutes on each day to make progress and find parts.

If the player returned to the area on another day, all enemies would be back, but any paths the player discovered remained open.

Combat consisted of the player maneuvering the Pikmin around enemies and trying to throw them on the enemy to attack them. The player also had to be ready to pull back the Pikmin before the enemy countered or they would be hurt or killed.

Pikmin’s time limit on a playthrough was both an interesting development and determent to the game. This was the first Nintendo made game since Majora’s Mask to give a major constraint for the player to deal with.

But unlike Majora’s Mask, Pikmin‘s time limit was one and done: once time ran out that was it.  The other problem was Pikmin’s length, while novice players could keep replaying the game to try and collect all the parts needed. Expert players could easily finish the game within the 30 day time limit.

This limited the replayability of Pikmin as outside of getting 100% of the ship pieces found, there was nothing else keeping the player invested.

But, Pikmin’s quirky charm and different gameplay helped win over fans and Nintendo released a sequel that drastically improved upon the design. More areas to explore, two player co-op, randomized dungeons and best of all: no strict dead line.

Pikmin 3 for the Wii-U is one of my most anticipated games for the system as I want to see more of Nintendo going off the rails, as you’ll never know if that idea will be a bang or a whimper unless you try it.

Up Next:  One of the Best JRPGs This Side of Shin Megami Tensei