In the past I’ve talked about my love of the Shin Megami Tensei series and Nocturne as the game that brought me back into the JRPG genre. But SMT games don’t come out too often and I needed to find other RPGs to past the time.

And what I found was an excellent RPG series that came and went with little fanfare.

Shadow Hearts published by Midway was a JRPG that its main hook was about giving the player more direct control over combat compared to series like Final Fantasy.

The series uses a system made up of: “judgment rings” to dictate player attacks. On the ring there were areas for the player to hit that would tell the character to attack. Miss the area and the character would not attack for that turn of combat.

Now, the first game in the series despite its rarity wasn’t that good in my opinion. While the judgment ring system was there, it was very basic and the rest of the game played out in typical JRPG style. Graphics were also pretty poor for the time and lacked the same sense of scale and style seen in other RPGs like Final Fantasy.

But where the first game failed to really branch out from other series, the second game — Shadow Hearts: Covenant was head over heels better than the first.

The first big chance was the combat system which was no longer about two sides of characters trading blows. This time combat took place in a 3d space allowing you to move characters around and get knocked in different directions during combat.

Characters had different attack types such as being able to knock an enemy in the air, or slam them to the ground which could be combined into combos to do additional damage. Placing characters next to each other would institute a combo attack: where each character would attack in a chain until everyone used up their attacks for that round. 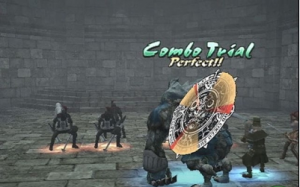 The concept of the judgment ring from the first Shadow Hearts was greatly expanded upon in the sequel and became more malleable.

Using experience you could alter the sizes of each area, or add more hits to each ring, allowing you to customize each character’s attack pattern. Rings also came in different types allowing you to gamble on how well you can hit the major areas.

The starter ring for instance would hit every time no matter where you pressed the button, but you could not score any critical hits. While the expert ring had more critical spots, but failure to hit them all would cause the character to not attack that round.

But the developers weren’t satisfied with just updating the combat system and gave us one of the most diverse cast of characters in just about any game.

The story of Covenant was a sequel to the first game, but you didn’t need to play it to understand what was going on. Taking place during World War 1, a lieutenant of the German forces unwittingly helps an evil society by weakening the only person in their way: the main character from the first game. So she decides to team up with him to help save the world.

The different characters were all unique and improved themselves differently. From a wolf who engaged in an animal fight club around the world, to a puppeteer who would change the clothes on his marionette to alter his attack abilities.

My favorite was the vampire/wrestler/super hero whose weapon of choice was random objects like a sword fish.

For RPG fans who like side quests, Covenant was a treat with every character having a different side quest and means of improving themselves. For the most part you were free to mix and match your party members into whatever team composition you liked. 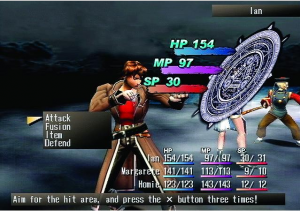 the original Shadow Hearts introduced the judgement ring system, but it wasn’t fully realized until the second game.

While I enjoyed Covenant, it didn’t reach the same level of greatness for me as the Shin Megami Tensei games did for several reasons.

First was that for all the ways the designers gave you for customizing your experience, the game never challenged you on them. Once you found a winning strategy and team, it could be used for just about every fight.

Contrast with Shin Megami Tensei where every boss was a unique challenge forcing the player to adapt.

On one hand, the easier gameplay allowed both newcomers and experts to play the game, but on the other the game became a bit of a slog as you progressed. As expert players would eventually reach the point where they were just going through the motions of combat to reach the next major event.

Speaking about a slog, all those side quests did come back to bite the designers in a way. As they greatly extended the game but made it easy to burn out on the title before finishing. Also, getting the best equipment and skills made the main game even easier to play.

Shadow Hearts did have a third game, which had even less fanfare than the second and the series has disappeared since then. Another element that may have hurt the game’s accessibility would have been two minor characters that were overly gay stereotypes. Who would give you upgrades for trading cards with men on them.

The PS2 era was home to a number of great JRPGs beyond the big name of Final Fantasy and Shadow Hearts is up there as a great middle point between basic turned based RPGs and the more complex titles like Shin Megami Tensei. But there is another RPG that we’ll be talking about at the end of this series that was even more out there than this.

Up Next: The King of All Cosmos