Looking at Japanese game design there is a huge variety of games: From the dark Shin Megami Tensei series to the insane Elite Beat Agents and the many games that we never see in the US. There is no such thing as a definitive game from Japan as the designs vary so immensely.

And today’s game is one such title: the absolutely ridiculous world of Katamari Damacy.

In the first part of this series I talked about Killer 7 that had an outrageously dark storyline. With Katamari Damacy, it’s too close to call with which game was the crazier title.

Here, you play as the prince of all cosmos whose father: The King of All Cosmos who after going on a drinking spree destroyed all the stars and constellations in the sky. In response he tasked the prince with using a special ball called the katamari to roll up miscellaneous objects with it to recreate the destroyed stars.

The objective of each level involved the player rolling up enough objects to create a katamari of sufficient size to clear the level within the allotted time. Hidden presents could also be rolled up that would be added to the prince’s wardrobe and levels could be repeated for higher scores.

Special levels around rebuilding the constellations graded the player on performing a specific task like rolling up a specific type of object. And that is really what Katamari Damacy‘s gameplay was all about, but there was more to the experience.

The game featured a random assortment of cut-scenes and one of the most diverse soundtracks heard in any video game. The designers didn’t have set rules for what could or could not be in the soundtrack and gave the composers and singers free reign. This in turn gave us a soundtrack that all the songs match by the fact that they were completely unique. 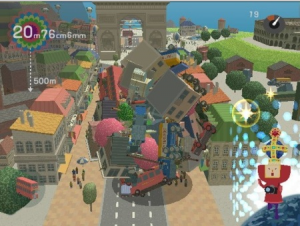 From people, to buildings and even clouds, the katamari would roll up everything.

Each song was catchy and it’s not hard to get one stuck in your head such as “Roll you in” for me. The visuals were simple but clean and still hold up reasonably well.

Katamari Damacy was developed by Keita Takahashi and the series went on to produce seven more sequels on various platforms.

However Keita intended Katamari to be a one off expression and didn’t want to work on sequels despite the popularity. He was supposedly pressured by Namco to work on the sequel: We Love Katamari and then left the series after that. His last published game was the PSN exclusive Noby Noby Boy which I did not play.

After that, Keita took time off from game development and designed children’s playgrounds which I don’t know about you, sounds like a cool job.  Since then there hasn’t been any major news from Keita regarding any upcoming projects.

Katamari Damacy was a game that screamed originality and was greater than the sum of its parts. Sadly, originality is not always a major selling point and can alienate a game in the eyes of its audience as we’re going to see tomorrow.

But for now, if you have no idea what Katamari Damacy was then far it from me to deny you the opening cinematic for the game.

Up Next: Dragon Math