For my final entry of great and somewhat obscured titles from Japan, we return to the JRPG genre with a game that really did not get enough love. I’ve talked about how much I enjoy games that try something different such as Shin Megami Tensei and today’s game is one such title.

It is Breath of Fire: Dragon Quarter: A JRPG completely different from all others and its own series.

Breath of Fire is a series that has been around since the Snes era and has been Capcom’s answer to SquareSoft’s Final Fantasy. The series has never risen to the production value heights of Final Fantasy and instead went for more varied casts of characters with different combat systems.

With the PS2, Square-Enix once again hit players with the big budget titles of Final Fantasy 10, 11 and 12. Capcom however decided to do things differently with Breath of Fire: Dragon Quarter and went with a complete redesign.

The first big change was the setting, moving from a typical fantasy world to a dystopian future where mankind now lived miles under the surface of the planet.  The main character Ryu worked for a military squad who used a ranking system called “D-Ratio” to determine how strong someone was.

As someone with a low D-Ratio, Ryu was considered a low class member, until he met a girl named Nina who couldn’t survive underground and he took it upon himself to bring her to the surface.

The D-Ratio ranking played heavily into the progression of the game. Dragon Quarter was more rogue-like compared to other JRPG series and was about the player replaying the game. The player would retain a pool of party experience points, weapon skills and more on each play, making them progressively more powerful and the early parts of the game easier.

If the player’s party was wiped out, they would restart back at the last save point, or they could take their experience and start the game back at the beginning and continue building their characters.

The upper D-Ratios would unlock new story events, open up paths and generally add new content to challenge and reward the player. Every time the player beat the game, their D-Ratio score would be calculated and if they improved enough compared to the last calculation, their ratio would move up.

The D-Ratio was determined by the completion time, level of the player’s group, and other factors. To get the best ranking which was 1/4, the player would have to complete all the side-quests and play through the game using only temporary saves and other conditions.

Combat was also different compared to other JRPGs and played out more along the lines of a tactical strategy game. Each character had action points or AP that would allow them to use skills and items, move or attack in a round. You could store AP for up to double the max for a character and unleash a massive attack.

Skills that would be unlocked through play or from loot could be attached to weapons and shields and then used in combat. Advanced play was about combining attack skills by using them in a single round of combat to get bonus damage or effects. 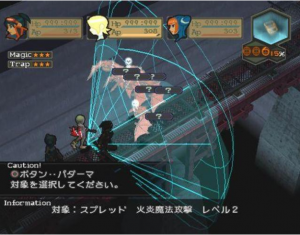 Combat required the player to make use of their limited party member’s unique talents.

What was interesting about Dragon Quarter was that there were only three characters total in your entire party:

The Main character who was a swordsmen, Nina who placed down spell traps on the field and Lin who used guns for long range attacks.

The smaller party allowed the designers to make each character completely different and greatly compliment the group as a whole. This would also become a major factor for the final parts of the game, where bosses developed a shield that could only be taken down with long combo attacks.

If the tactical gameplay and rogue-like nature of the design was all there was, Dragon Quarter would still be a great game, but there was one other mechanic that puts it up there as one of the best, as I haven’t found a game that has used it since.

Very early in Dragon Quarter, the main character fuses with a dragon and develops the ability to transform into a half human half dragon creature during combat. In this form, the player was invulnerable to damage and could make use of powerful abilities.

One such power multiplied the attack damage of the player each turn they used it. And after three turns, the player would have enough power to kill any enemy in one punch and I mean every enemy. With this tactic, even the final boss would die in one hit and to this day I have yet to fight the second to last boss as I’ve just finished it with the tactic every time.

Now, you’re probably asking yourself “what kind of tactical game gives you an I Win Button?” but there is one tiny thing that you have to keep in mind: Using the power would eventually kill you.

At the same time the player was given the power, the game introduced the D-Counter that represented the corrupting influence of the dragon. Every few seconds of play the counter would rise by .01 % out of combat and .02 % for each complete turn of normal combat. Activating any of the dragon abilities and even just turning into it would cause the counter to rise more dramatically.

If the counter hit 100%, the player’s body would burn from the dragon power and the game would end. This introduced a very interesting mechanic as the player at anytime could flip on dragon power and wipe out everything that stood in their way. However you had to think both in the short term and the long term in order to make it through the game. 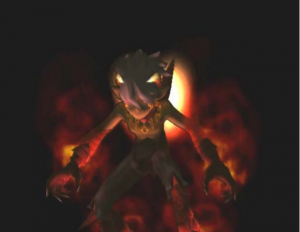 Dragon mode presented an interesting dynamic of forcing the player to decide how much power to use in any given situation.

The first time I managed to successfully beat the game, I had a D-Counter rating of 99.95%.

There is always a challenge in game balance with giving the player too much power, but by forcing the player to decide how much power they should put into any given situation and weigh it over the long run, was an interesting design.

However, for all the good I’ve talked about Dragon Quarter, the game did not sell well and was considered the nail in the coffin for the Breath of Fire brand.

The main problem with Dragon Quarter was that it was a complete redesign of the brand and alienated the core fans of the series. Dragon Quarter was released in 2003 in the US and 02 in Japan. At this point, rogue-like design — specifically the act of replaying a game over and over again wasn’t that known in the mainstream.

When you first started out, your characters were very weak, both due to lack of skills and proper equipment. It was very unlikely for someone to beat the game on their first time through due to the stat differences at play.

Many hardcore fans didn’t like the idea of replaying the same content with only slight alterations. The D-Ratio system, while interesting, didn’t provide major changes to the gameplay, there were no new bosses or enemies added or brand new dungeons to explore (with exception to the post game difficult dungeon.)

The combat system clashed with the rogue-like nature of the design by requiring the player to spend several minutes fighting, compared to a few seconds to a minute in other JRPGs.

Incidentally, members of the design team behind Dragon Quarter would go on and change the formula to create Dead Rising for the 360. Dead Rising, having none of the baggage from previous games like Breath of Fire, sold incredibly well and became one of the breakout hits on the 360.

Brand loyalty can be a double edged sword; on one hand you’ll keep a core group of fans with each new game in a series. However, any major deviations from the brand can alienate that group and you may not be able to win over enough new fans to make a profit.

I hope you’ve enjoyed this look at a small slice of Japanese design and if you haven’t checked out the kickstarter for The Untold History of Japanese Game Developers, you only have a few days left at the time of this post to pledge if interested.