Getting it Right the First Time: Startropics

I am reaching back with this one. Following the success of Zelda on the NES, Nintendo experimented with other games in the action adventure vein and as a result we got Startropics. When it comes to sequels not living up to their predecessors, Startropics is a perfect example — featuring both improved and worse gameplay.

Startropics at the time was special as being one of the first games to take place in a modern day setting and a game developed by Nintendo that was never released in Japan. You played as Mike Jones who upon visiting his uncle Dr. Jones in the tropics, gets thrust into an island hopping mystery to find his missing uncle.

Startropics wore its action adventure title proudly featuring both basic puzzle solving and action levels. The flow of each chapter was that players would explore an island in a top down view similar to a RPG. Finding clues, items and anything else they needed to find the dungeon. Entering the dungeon would cause the game to transition to a view similar to Zelda.

I’m not sure if this was due to technical limitations or a design choice, but the player could only move and attack in the cardinal directions. This forced them to line up their attacks when dealing with diagonal enemies. The game featured loads of deadly traps and varied boss fights to challenge the player. Many segments required the player to jump across blocks to find switches needed to progress.

Level design for the time was decent with each dungeon having different challenges to overcome. During the island segments, the puzzles varied in terms of difficulty with the most annoying for me being a musical puzzle.

As the game went on, players would upgrade their weapon and find new items and additional health to deal with the later challenges. And as a funny aside, Startropics was the first game to feature the ever popular tactic of dressing up as a woman to get into a restricted area. 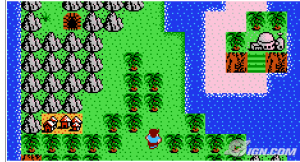 The over world provided some decent exploration for the time and helped linked the dungeons and environments together.

Startropics story line definitely took a turn for the weird as the game goes a sci-fi direction when you learn that aliens kidnapped Mike’s uncle and the final chapter featured space ships, laser guns and fighting giant robots.

The combination of action and adventure elements meshed pretty well and of course the game got a sequel, however the developers committed a cardinal sin: Fixing what wasn’t broken.

Startropics 2 replaces the island hopping theme for time travel as Mike must now explore time and space to find magical items to save the world. Each chapter now took place in a specific time period with the same theme of over world exploration and dungeon fighting.

The developers updated the control scheme and now Mike could operate in the ordinal directions. While it may not look like it to modern eyes, the graphics were improved compared to the original. While the same basic flavor of Startropics remained, something was off. The over world segments became increasingly less complex with later chapters being just a simple stroll to the dungeon.

Most of the death traps and challenging boss fights of the original were gone. And the ability to move diagonally brought new problems. Enemies and bosses became a lot easier and there were several areas that were broken by players who could jump diagonally. The limitation of the previous game allowed the developers to be more creative with the puzzles and traps to compensate and Startropics 2 just felt lacking.

Whenever you’re designing a sequel no matter if it’s to a popular or not popular game, it’s important to understand what worked and didn’t work in the original. With Startropics 2, the designers only improved the general gameplay but did not do anything with improving the adventure or challenge of the game. 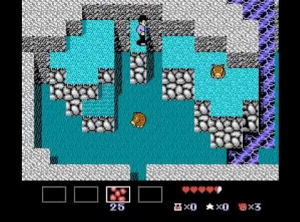 Dungeon exploration was where the action came in and I found the first game to be pretty good on that front.

An example of a right kind of growth would be the jump from Assassin’s Creed 1 to 2. The developers looked at what elements worked and the ones they wanted to keep and basically tossed out or altered everything that didn’t work.

This led to Assassin’s Creed 2 being a very improved sequel and one of the best games of the last generation.

Still, Startropics remains one of my favorite games from Nintendo and if I could wave a magic wand and cast a spell I would get them to remake it for today’s audience. But it would have to be one very strong wand and I would have to bundle that spell up with convincing them to port Mother 3 over.

Getting it Right the First Time: Crackdown

Graphics vs. Aesthetics and Nintendo’s Ace in the Hole