Concluding this short series on action game design, I want to talk about enemy design AKA the things you’re going to beat up on over the course of the game. Great enemy design is all about striking a balance between enemies that are nothing more than crash test dummies and kung fu masters.

Because action games are based on player skill rather than abstracted systems, good enemy design cannot be stressed enough as there are no hidden mechanics or variables to distract the player from poor design.

Enemies can be largely separated into four groups based on their durability or amount of time the player should focus on them. Grunts are the basic enemies, and will attack in the largest numbers and barely do anything other than run at the player and maybe defend.

Support enemies are usually designed around a specific ability or special attack and do more damage. These enemies are usually dispersed in small numbers along with the larger grunt force. They may heal, teleport around or generally be a nuisance that needs to be handled.

Elite enemies are the big guns both literally and figuratively. They are usually the biggest enemies and do the most damage outside of boss fights. It’s customary to introduce these enemies as a “boss” before putting them into groups of support and grunt enemies. Normally the player will only have to deal with one of them in a single encounter, but some designers like to make harder encounters with two or more at the same time.

You can always tell an elite enemy by the fact that they are the ones you want to save for last, so you can focus your complete and undivided attention on. And before I forget, we’ll use the term encounter to describe a single area with enemies you have to fight.

The last group are of course the boss fights, unique battles usually one on one with an enemy one time, with exception if the game forces you to fight them again in a “boss rush” section. Bosses are always their own unique encounter, but may have other enemy types as backup. 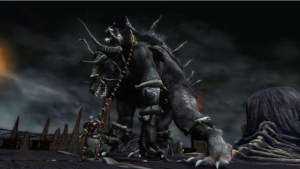 This massive guy would be an example of an elite enemy, requiring a lot of attacking to take it down.

Now that we understand the groups, let’s talk about the design. Good enemy design in action games is all about the balancing act of enemies being pushovers or completely unstoppable.

If the player is just rushing through mobs of enemies by pressing one button, then the combat becomes boring.

But if every fight becomes a ten minute struggle, that doesn’t work either. This is why simple stat increases over difficulty levels don’t work in action games, as you’re just lazily extending the playtime.  Some elements of RPG design can fit into our discussion on action game design.

First you want to avoid any enemies that can only be taken out one way. Maybe they counter all attacks except for X, or they’re immune to most damage types. Part of the joy of an action game is creating crazy combos attacks based on your available tool set and restricting the player’s options lead to boring combat.

An example would be the later enemy types in DMC, where the enemies could only be hurt by either angel or demon class weapons. Because your combos are meant to be spread across Dante’s weapon types, these enemies just turned into a slog of you hitting them with the same weapon over and over again until they died.

Another part of this is designing an enemy that effectively removes a player’s ability from their tool set. For instance in Bayonetta, gold plated enemies would not trigger the player’s “witch time” which was their main defensive ability for dealing with enemies. Or in Dante’s Inferno where the last boss was immune to an entire skill tree of abilities.

One major decision that you need to decide on as the designer, is whether the player can interrupt enemy attacks, as this will radically effect the player’s options during combat. Some games introduce enemies who have attack animations where they can’t be stopped from attacking.

In my opinion I’m not a fan of this as more often than not, the player will take free damage while they are stuck in a combo animation when an enemy goes into their attack. Now there is an exception to this, when an elite or boss enemy is using their “big bad” attack that you don’t want it to connect. But these attacks need a pretty big windup time to clue the player in.

If you want to give the enemy some defensive options of their own, you can tie the player’s knowledge of the combat system into the enemy’s defense by giving the enemy a greater chance to block, dodge or counter repeated attacks. Games like The Mark of Kri and Kya Dark Lineage made use of this to promote a greater combat variety. 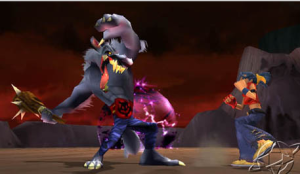 Kya Dark Lineage featured enemies who would respond to repeated combos with defending more, requiring the player to make use of the entire combat system.

Some of the best enemy designs in action games are those that attempt to challenge the player much like a fighting game: By testing the player’s mastery of the mechanics.

Now this is a lot harder to program but it can be worth it if you are aiming for a hardcore audience. I’ve said it before but Ninja Gaiden Black is the quintessential example of this and is a must play for anyone interested in action game design.

Each difficulty level did not raise the enemy stats but instead introduced new enemy types. These enemies had more moves, different patterns and were a lot more dangerous to fight. The designers even added in new boss fights on the later difficulty levels further increasing the challenge level.

But the beauty of Ninja Gaiden Black’s design was that the new enemies didn’t have a lot more health, so the player could still defeat them in short order. They were simply more dangerous to fight to provide a challenge.

Keeping the player engaged with an action title requires as much attention on the enemy design as you would on the player mechanics. Both areas have to work in order for the game to shine and not many titles do that. Either the enemies are too difficult or the combat system is boring.

Again the importance of play testing cannot be overstated, as it is the only way to see if these systems are in sync or not. Both sides need to be properly balanced with sufficient mechanics for both offense and defense. And as we’ve talked about, the fighting genre is a good analog in understanding flow and how it can be translated into action games.

Even with Ninja Gaiden Black now a generation old, it still remains to me as one of the best examples of the action genre and it will be interesting to see if this generation will be able to upstage it from the number one spot.