Big Pharma quietly entered open beta recently and I had a chance to try it out. Developed by Twice Circled and published by Positech Games. This management style game takes the genre to the pharmaceutical industry with one of the most addictive games I’ve played, thanks to some great twists on the usual design.

(The following spotlight is based on version .40 of Big Pharma. Screenshots and impressions may not match the current build. The game is currently in open beta and available from the Twice Circled game site and you can buy it there for a discount. They are going to be releasing it on Steam, but I don’t know when at this time)

Big Pharma is all about the challenges of managing a pharmaceutical company; your job is to make your company profitable with rival companies and a fickle consumer base in your way.

Currently the game is played via a bunch of scenarios; from tutorial and beginner, to advanced and specialty. After naming your company and picking your aesthetically pleasing CEO, you’ll be taken to the assembly line. The task at hand is creating the most profitable drugs that you can, given the limited space and cost of development.

From the cure screen, you can see all the currently known cures and their cost and demand. This is important as something easy to make, may not sell well or have enough of a consumer base to warrant development. Ingredients are shipped from around the world and have a cost per item along with specific stats. 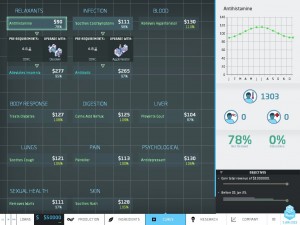 Starting cures, demand and their price are randomly selected at the start of each scenario

Every ingredient has the following: A base concentration, side effects, potential cures and sometimes a catalyst (more on those in a minute).

How it works is that the concentration level determines what part of the ingredient is active at one time. Different side effects and cures will turn on and off within certain thresholds of concentration.

Altering the concentration is done via machines set up on your assembly room floor and is another major part of the game that we’ll talk about next. With the ingredients, cures will raise the value of your drug while side effects will drive it down and affect their actual pricing.

You can alter ingredients to either upgrade the cure or remove side effects by getting the concentration to a specific point and using the specified machine. Higher tier cures will sometimes require you to have a catalyst on the ingredient as a prerequisite for it to upgrade.

Advanced play involves combining ingredients to produce new drugs and mix and match side effects and cures.  If you ever wanted to create Viagra that also cures insomnia, ADD and helps you lose weight, this is your game. Once a drug is at the point you like, you can package it, name it and let it go to market. The better the drug performs will affect its grade which will either raise or lower the amount of money you’ll make.

Once you’ve decided on your strategy, it’s time to plan out your assembly line and where Big Pharma throws another challenge at you.

Manufacturing your drugs relies on you to set up conveyor belts and machines to process and refine the ingredients chosen. As mentioned further up, raising and lower the concentration value will determine what side effects and cures will be active.

The machines all have an input and output section that you must connect conveyor belts to. At the moment, the belt design is pretty basic with a one way system. You can set up two different paths that pills can take if one path is already blocked, but that is the current extent.

Setting up machines is where you’ll have to do your best Tetris impression to get everything as you want it. Advanced machines can dramatically affect the concentration value and there are those that can mix and move cures and side effects around. 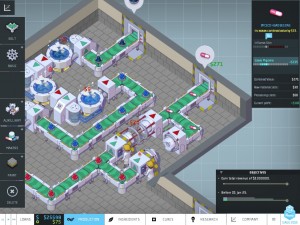 The challenge of setting up your assembly line is deciding how much space is worth to you.

Nodes set up around the plant will either act as input stations for ingredients or allow you to send the drug out. You can spend money to buy new areas but the cost will add up fast.

The basic machines will raise and lower the concentration value by one and cost the least, but later machines that do a lot more will usually cost several times the operating cost daily in order to make use of them. This all goes back to your bottom line: How can you get the most value out of your pills without going into the red to make them?

With different starting conditions and a variety of scenarios for replayability, Big Pharma is already an impressive management style game and leaves me with very little to complain about.

In terms of mechanics and design, there really isn’t anything that I can say is a problem with Big Pharma. At this stage of the beta, the foundation of the game is definitely in place and the scenarios that are in are playable.

If I had to find anything to nitpick, Big Pharma has the opposite problem of Prison Architect at the moment in terms of content. Prison Architect has no scenarios but gives the player a sandbox to enjoy and do anything they want in. Big Pharma is the opposite; there isn’t a true “free play” mode at the moment and the game is built around scenarios. 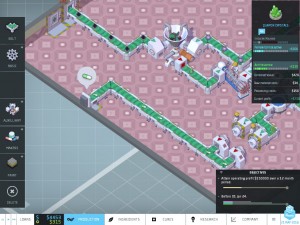 Combining cures can be done with a little luck and the right machines, but can be worth it for the added value

This isn’t a bad thing mind you and there is still more content to come as the game gets closer to and eventually released. I think it would be interesting to have a sandbox mode similar to Prison Architect or some classics of the genre like Theme Park and see how far you can go.

I think my only gameplay concern is just how different the late game is going to be compared to the early and mid.

The reason is that due to the tier system of cures, once you’ve found one that works for you and is profitable, it’s very easy to go on auto pilot and let the money come in. While the scenarios certainty give you some goals to aim for, at the moment there really isn’t a difference between the first 10 minutes of play and 2 hours of play. Advanced machines perform the same roles as earlier machines, just with small differences.

Another part of this could also be the fact that the competitor AI isn’t that far along yet at the time of this post; with the AI doing very basic things but not really competing against you.

Lastly, there isn’t much information on just how big the management side of the game will be or potential options that go along with it; such as setting up advertising campaigns, market research and so on. Right now, there isn’t much to do other than checking on what the competition is up to product wise.

For fans of Bullfrog styled games, Big Pharma is definitely one to keep an eye on. If you decide to buy it now straight from the developer site, they are offering a discount along with a Steam key when the time comes.

Big Pharma takes the management sim genre in a different direction compared to its predecessors and is already starting strong. I can’t wait to see how this turns out and it’s been a long time since a beta has gotten me this excited about the full game.

For more Big Pharma, you can watch the series of videos I put up on the Game-Wisdom YouTube channel.