Klei Entertainment has really jumped onto my radar these last few months. Recently with the amazing Mark of the Ninja, that was one of my favorite stealth games in recent memory. And now they are moving from the city to the wilderness. Taking the player to a magical land of beauty and nature… where everything hates you.

The following Spotlight is based on the beta. Meaning that my impressions both positive and negative may not be accurate when compared to the finished product.

The objective of the game is right in the title. In Don’t Starve you have been sent to a nightmarish wilderness world straight out of a Tim Burton movie. To survive you’ll need food and materials, both that come in a wide variety. Similar to other open games like Minecraft, you’ll be crafting various tools and objects from the land around you.

A crafting list on the left hand side of the screen shows you everything that you can build or unlock (more on that in a minute) and what is needed. Removing the need for the player to guess at how things work which there is no time to in Don’t Starve. 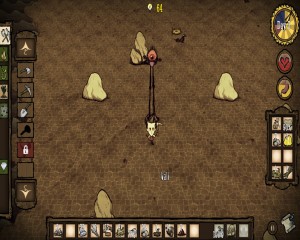 The birds hate you

At all hours of in game time, the player’s stomach is gradually becoming empty, which of course means that you need to eat.

Food can be picked up, cooked and even supplied from dead animals, but it’s an always emptying timer to your survival. As once you run out of food, your health will begin to decrease.

Besides the variety of flora and fauna out to get you, the other ever present danger is the dark. When nighttime hits, you’ll need to set up a fire for a source of light. As there is “something” out there in the dark that will come after you if you wander around too long in the dark.

Progression in Don’t Starve works on two mechanics. First, every day that you survive, will earn you experience points. Currently experience is used to unlock new characters, which have different advantages in the world.

The second form of progression has to do with the crafting system. One of the first items you can build is the Science Machine. When you’re standing next to the machine, the crafting list will expand to show every item that can be created in the game. To unlock new items you’ll need science points, which are earned by feeding items to the machine. 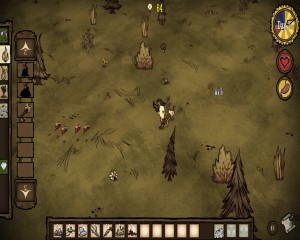 The Bees Hate You

The new items come in all varieties: from better equipment, clothing, higher rated materials and more.

While the world may remain static for each play through it, you’ll be gradually unlocking new items to change how you use your materials with each play.

What I like about Don’t Starve is that the added pressure of surviving during the night lends more focus to the gameplay. As opposed to a title like Terraria or Minecraft – where the game is all about the player setting the goals themselves.

Don’t Starve is also a lot more challenging than other open ended games, as many larger enemies can kill you in a few hits. Your first few plays will probably be about figuring out how things work.

Now it’s important to remember that Don’t Starve is at the time of this post in beta. As it stands the game isn’t completely done and there are a few nagging points. First is that there is a lot of grind due to the science machine unlocking mechanic. You can’t just find a new material and start making stuff out of it like in Minecraft.

The game currently doesn’t have a real “end goal”, other than to keep surviving. Eventually for the truly hardcore, you’ll run out of food and materials with nothing to do. Some people on the forums have said that they have survived 365 in game days with a single character.

But I’m not too worried as the developers have been adding more to the game. About every ten days, there has been a new content patch that adds more items, crafting and enemies to the world. According to the developers, one of the big changes that will be coming in an update will be the removal of the science point system in favor of something with less grind. 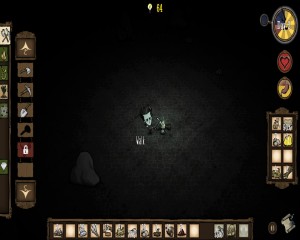 Even the dark hates you

Don’t Starve scratches that itch for a game about survival which we don’t see very often. For now you can pre-order the game from Steam, which will get you immediately into the beta.

Pre-orders also receive one additional key that can be given to a friend, to share the experience of roughing it in the woods.

You can also try the game out on a browser, which you can find a link to it on the Don’t Starve site.

Just remember: Only you can prevent forest fires… or the trees will come to life and kick your ass.