Last week on the podcast, Jamie Fristrom from Happion Laboratories stopped by to talk about Energy Hook: A spiritual successor to the swinging mechanics last seen in Spiderman 2. And he was kind enough to let me check out the alpha and let me do my interpretation of George of the Jungle.

(Please Note: The following spotlight is based on the current Alpha build of Energy Hook. Screenshots and descriptions may not reflect the release or even beta version of the game. Jamie on the cast mentioned that he is shooting for releasing the beta in November and I may post a new spotlight to reflect any and all changes)

With the Greatest of Ease…

Energy Hook as Jamie described it on the cast is like the sport of the future where athletics swing around using modified jetpacks and the titled energy hooks for fame.

The game is open world with multiple sections or cities that the player can swing around in. While exploring you can find geocache nodes that are collectibles hidden around.

Currently, Jamie is aiming for three types of events in Energy Hook. First are simple race events where you must swing from point A to B in the quickest time. Second are trick events where you must earn enough points via tricks (more on them in a minute) to win. And lastly and what was recently added, sections that take place in a virtual environment where you must figure out how to reach the goal while swinging around, through  and above a variety of obstacles.

The future sports concept comes into play by how the player can buy new equipment to enhance their abilities but at this time the mechanic is not currently implemented in the alpha.

Of course the real hook (no pun intended) of the game has to be the swinging mechanic and for those that played Spiderman 2, you should feel right at home. 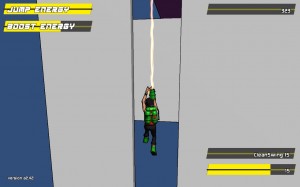 The basic control system for swinging from Spiderman 2 is present in Energy Hook.

Using either a gamepad or keyboard and mouse, holding down the swing button will cause the player to send out the hook to attach to the nearest solid surface. From there you can swing as long as you hold down the button.

Tricks which were another recently implemented mechanic can be performed while in midair with currently two available. The challenge is that you can only perform tricks while not swinging and it will require some time before you can start stringing together multiple tricks. 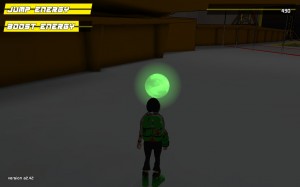 Wall-running makes a return but at this point I had a hard time getting it to work. Many cases I would either bounce off the wall or would only run for a few seconds before falling off.

Energy Hook is still very much an alpha build game as I had some physics wonkiness where my hook would attach to a very far away object and launch my character forward like a zip line. And trying to move vertically up can be troublesome as unlike Spiderman, you don’t have web zip lines or wall climbing powers.

I also had some issues with the hook itself at the moment. Where it seemed to not want to attach to anything and I would fall into the ocean or into nothingness.

However with that said, the base gameplay definitely shows promise. In my opinion, the real make or break moment will come when one section is completely done along with the mechanics and we can see how everything comes together.

Right now, there is a great foundation at play and I’m really interested to see how things evolve. There are a lot of different ways Jamie can take the concept from an extreme sport of the future angle. On the cast he talked about being inspired by SSX 3 and Tony Hawk 4 in how the open world was engaging enough on its own to play around in. If he can deliver a similar experience with Energy Hook, I think he’ll have a real winner.