For the regular readers of Game-Wisdom, you have probably guessed that we are big fans of ARPGs: Both in the way of providing great co-op and how you can personalize a character to fit your preferences.

Today’s Kickstarter spotlight is for one very interesting title that is attempting to combine co-op side scrolling action, with completely customizable and modifiable equipment. And not only that, but they are local Philly developers with one amazing concept.

There isn’t a whole lot to go on with what Artizens is about, but the videos on the kickstarter do show some impressive designs. The game is a 2d action title with a very powerful customization system. Players go on missions to take down monsters either solo or as a group.

The videos show a really amazing level of destruction that you can inflict on enemies, such as breaking the tail off of one of the boss like enemies. Defeating monsters and completing quests will earn you materials that can be used in the real hook of Artizens: the crafting system.

Every piece of equipment in the game is not only craft able, but modifiable to your specifications. The video shows a crafting system with a lot of power behind it. First you pick what type of gear you want, and then you add mods to it. The mods and gear type require specific materials that you’ll pick up while playing. 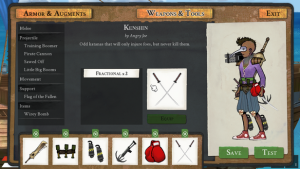 The modifiable design behind every item is sure to give birth to a variety of crazy gear.

The mods themselves come from a huge list of possible choices which your only limitation is how many materials you have left.

Lastly you can completely customize the way the item looks in game, either by choosing from pre-made designs or using the in game editor to draw your own version.

You can also download or share items with the online community making sure that you are never without new equipment.

The art style has a hand drawn look to it that I think goes well with the style of the game. The thought of being able to completely customize a character and their gear to go out and fight monsters with it sounds amazing. The game almost looks like Little Big Planet mixed with Monster Hunter.

The customization side of the game will no doubt keep people entertained, but the game also features randomized missions of varying difficulties and challenges. Which every mission can be attempted either solo, or with a group.  The developers hint at wanting to grow Artizens with more missions and content, which with a game as ambitious as Artizens can only keep going up.

Adding to the accolades, it’s great to see such an ambitious work being made almost around the corner from me, living in New Jersey. Artizens just hit their goal over the weekend and are now working towards stretch goals. Which in a twist, the goals themselves are additional unique pets for everyone who has pledge towards the game.

Artizens looks like it could be the foundation of something really amazing. Even from just the videos, the game shows a lot of promise and creativity. For those looking for another unique game to back on Kickstarter, Artizens has you covered.

Path of Exile : Walk On