Devil May Cry has had an interesting timeline, starting out as the original framework for Resident Evil 2; the game design became its own franchise and one of the most popular series from Capcom. With highs and lows the series has grown to have an established back-story, characters and design.

When news broke that not only Devil May Cry was going to be rebooted, but that Ninja Theory was going to be the studio to work on it, fans weren’t too excited. And yes, all the signs pointed to DMC being a failure, except not only did it turn out differently but it was one of my favorite games of 2013.

DMC is a complete reboot of the series with pretty much the entire story thrown out in favor of a new one. Dante is now half angel and half demon and lives in a world that is secretly under the reign of demons who keep everyone in check with debt, drugs and a news network spouting the “truth”.

The human world is now connected to the demon world known as limbo which is a twisted reflection of our world. In order to overthrow the demons, Dante teams up with his twin brother Vergil to free everyone.

Dante is a bit of a dick at the start of the game and the overall tone of DMC is darker than the previous games. Expect a lot more cursing, heavy metal and gratuitous killing as well.

With that said however, the story I think is a step above compared to the previous games. The twist that the world is already under demon control and the use of limbo adds an interesting plot to the game. Speaking of limbo, the art design of DMC is really great, with some jaw dropping scenery as Dante explores the world of limbo and the transitions into it. I would even go as far to say that it ranks just below Bioshock Infinite in terms of a great visual style for 2013.

But we don’t play a Devil May Cry game for the story or the graphics, but the gameplay and this is where DMC could make it or break it. And as another surprise, DMC is one of the best action games I’ve played in awhile.

As in previous games, Dante is always armed with his handguns ebony and ivory and his sword rebellion. But keeping with his new back story, Dante’s angel and demon powers manifest in two new classes of weapons.

While holding the left trigger down, Dante uses angel powers and the scythe Osiris, which is better for group attacks and is quick. Holding the right trigger and Dante goes into demon mode and uses the heavy axe arbiter, doing more damage but a lot slower. He will also unlock two additional variants, one for each mode as the game progresses. 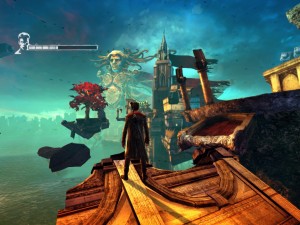 The art design is surprisingly good between the human and demon world.

Dante also unlocks chains that are tied to the X button which their function is based on what mode you’re in.

Using angel mode, the chain pulls Dante towards the enemy, while the demon mode pulls enemies towards Dante.

Combat is very fluid as the player can transition between normal, angel and demon mode simply by holding or releasing the trigger button. Allowing you to chain combos between the three and makes combat very engaging.

When you add in the ability to pull enemies towards you or pull to them, the combo potential grows greatly. And just like previous Devil May Cry games, you are graded in terms of style and in order to get the best ranking, you’ll need to make use of all of your talents.

Enemy design is alright and the game does throw a curve ball at you when introducing enemies who can only be attacked with either angel or demon mode.

Now the big question: Does DMC take the crown away from Devil May Cry 3 as the best one in the series? And to that I would have to say no, while DMC is a fantastic game, it does have a few slip-ups here and there.

The combat, while interesting, does feel a little one note in the sense that all combos are based on the same attack pattern regardless of your weapon. Unlike Devil May Cry 3 where each weapon was completely different and offered a far more technical based combat system.

Because your modes and therefore your weapons are tied to the triggers, DMC feels more button heavy compared to previous games and you do have to make a mental check of what mode to attack in. 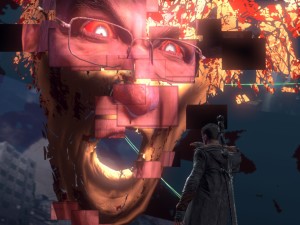 While each boss looks radically different, there weren’t any that provided a challenge beyond just pattern memorization.

Ranged weapons also have a problem as the game doesn’t have a lock on feature from what I could tell.

When you’re trying to target a specific enemy it becomes almost impossible if they’re in a group and sometimes the chain lock-on has a mind of its own.

Another one note area are the enemy designs, both normal and boss fight included. The regular enemies are pretty basic and only become a hassle later on when advanced enemies are introduce around certain gimmicks or having to wait for a specific animation to attack.

I also found the timing for dodging to be hard to gauge due to the timing window being so small. There were cases where I dodged and got hit and other times I thought I was too slow and managed to avoid it.

The bosses may look varied but are all based around basic patterns. This is one area where DMC is definitely lacking compared to the challenging and varied fights of Devil May Cry 3.  A noticeable difference when you compare the final battle to Devil May Cry 3 that are very similar, but the execution was handled better in Devil May Cry 3.

The camera did an adequate job of keeping track of what’s going on, but it did slip up a few times when getting stuck on walls. Still, it was good more often than not.

While DMC may not overtake Devil May Cry 3, it is still an excellent game and all the more fantastic by the fact that this was Ninja Theory’s first time at the wheel. If you have been ignoring it on the account of the reboot and change in developer, this is definitely one of the best action games of 2013.

As a foundation going forward with the series, I hope Ninja Theory continues to improve the formula as they have a winner here.

*For more discussion about DMC, we brought it up during our talk about the action genre on the Podcast