The last time I talked about Dungeon of the Endless, the game was in Early Access with a good portion of the design finished. With the game finally out this week, it’s time to once again do some rogue-like dungeon crawling.

For this post, I’m going to be skipping over a lot of the basic gameplay and design as I talked at length about it previously with my spotlight. Instead I’m going to cover advanced play and what has been added since the spotlight was up.

Besides giving the game’s UI a new paint job and starting screen, Dungeon of the Endless has its end game and Meta content fully established. In the earlier versions, the only form of progression you had from previous games was unlocking characters by keeping them alive through three floors. Now, certain characters have a back story together which is unlocked after each floor, completing the story will give those characters bonuses for the remainder of the play through. 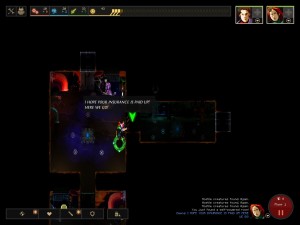 Each character’s personality is expanded on now with stories between them and little quips during play.

There are ships that can be unlocked by meeting certain conditions. Your ship/escape pod is essentially the mode that you’re going to play the game in.

One ship for instance is the game’s hard mode while another makes it easier to heal your characters at the expense of losing the ability to auto heal after every wave.

The challenge of Dungeon of the Endless is that you need to constantly juggle where you’re focusing your progression on. You have the heroes themselves that need food to level up, unlocking new modules through science, placing defenses with technology and of course managing the dust needed to keep rooms secure.

The beauty of the game is that it is definitely a tower defense title — you have a hard point on the map that must be defended from waves of monsters. But where these enemies come from is all on you as the more doors you open means more resources, but it also means more threats. 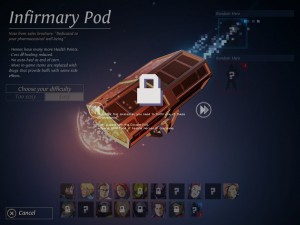 Your starting ship affects how the game is going to play and gives the developers a lot of leeway for adding future content/modes.

You constantly have to weigh how long you stay on a level to gather the resources that you need to strengthen your heroes or build defenses. The rogue-like elements come in with how your strategy for survival is dependent on what you find on each floor.

Finding a lot of items to strengthen your heroes means that you don’t have to rely on modules or static defenses, but this puts you in a position where your heroes must always be on the front lines.

Upgrading and finding new modules gives you a lot of toys to play with and set up defenses, but if they fail you won’t have a plan b as your heroes won’t be strong enough to fight on their own. The trick to effectively winning a game (at least on the harder modes) is being able to balance your progression so that one strategy isn’t your dominant. However this takes me to my main problem with the game and the lack of options the player has.

As with any rogue-like, your progression through Dungeon of the Endless is completely randomized. One time you’ll make it 10 floors in without much trouble, next time you’ll die on floor 1 in under 8 minutes. The problem is that there aren’t enough mechanics or options to circumvent or at least try to get around a bad hand.

If the dungeon doesn’t spawn enough dust to light your way to the exit, you’re practically dead. Not finding any items or upgrade stations, dead, too many open areas and not enough defenses… you guessed it, dead. This is where Dungeon of the Endless’s combination of rogue-like and tower defense hurts it as there aren’t enough advanced tower defense mechanics for the player to make use of.

There’s no way to really corral enemies around as they will go through the open doors that take them the shortest way to their target. The game doesn’t really tell you the attack patterns of the different enemy types and there are a lot in the game to deal with. Once a door is open it will remain open forcing you to deal with the new hole in your defense. There is a module called the holohero that will distract enemies, but again if you don’t find it and unlock it, you lose a critical tactic for survival. And even then, the holohero doesn’t distract all the enemies, only a specific type. 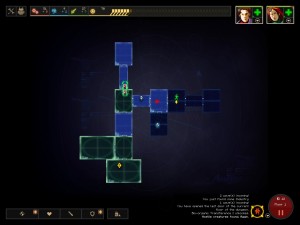 The level’s layout is a huge factor in determining your success as not having enough dust will leave you with plenty of areas for enemies to come from.

Health and defense are very important as you need to keep your heroes alive long enough for the modules to do their job.

It felt like while playing on easy mode that the enemies were quickly scaling beyond my heroes and without finding items there was nothing I could do as leveling up doesn’t raise your stats up that much.

Another point of frustration is not having the ability to set up any defenses at the crystal/defense point. As there were times where I opened up a door from the start to have enemies flood in and had to take a dust lost as there were no modules in there to help me fight them off.

I know that I’m coming down on the game more in this post but that’s because I’ve had a lot more time looking at what options the player has for advanced play and there really aren’t any.

There are too many ways for the player to fail and not enough for them to succeed. Which I know is a major part of the rogue-like genre, but there has to be some give and take. Having the player fail on the very first floor with absolutely nothing they could have done differently is a sign that the difficulty curve is a bit high at the moment.

It is somewhat frustrating to have content locked behind a purchase but the developers are looking at alternative means for getting the content.

Dungeon of the Endless is a unique game and despite my problems with it does have a lot of promise. The rogue-like and tower defense systems are still great and provide a good time for fans of both genres, but be prepared to rough it out.

THOUGHTS ON
“Dungeon of the Endless — Going Up”