Layers of Fear: Not too Deep

Layers of Fear is another game in what is becoming a long line of horror house-styled games from the Indie market trying to capture the magic of Amnesia the Dark Descent. While the game has a great visual style and hook, there just isn’t much to do other than to jump at the scares.

The story is that you are an artist returning to your home to complete your masterpiece, but as with games of this kind, there is a dark secret about the house and your life waiting to be revealed. Similar to Amnesia and Gone Home, you’re going to spend the majority of your time wandering around the house looking for clues and the next important event to move forward.

Jump scares are a plenty in Layers of Fear; of course I’m not going to spoil any of them here. As a great touch, the game makes use of the visual styling of a distorted or messed up normality quite well. While you will be moving from room to room, you’ll quickly find the house taking on a life of its own: Rooms disappearing, doors moving when your back is turned and of course nightmarish distortions right out of the Silent Hill playbook. 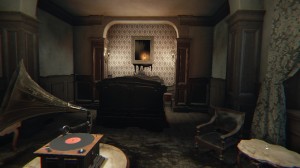 The game looks fantastic, with both the normal and distorted environments looking great

There are pieces of lore to find that help flesh out the tale and will point you in the direction of the game’s secrets.

Occasionally, you’ll find puzzles or rooms with strange events in them, but nothing fatal that would warrant a reload. While you can be “killed” at certain parts, you will be returned close to where you were with no progress lost.

With that said, unfortunately Layers of Fear only scratches the surface of a good horror game.

Layers of Fear is not a bad game in the sense that the gameplay doesn’t work, but there just isn’t anything here to really explore from a design perspective. Among the Sleep is probably the closest comparison to the game, but they still had gameplay in the form of both puzzle solving and stealth sections. Here, there really isn’t anything to do other than move from room to room and jumpscare to jumpscare. 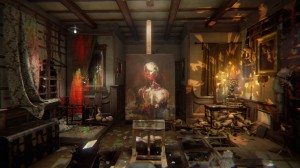 When things go crazy, Layers of Fear has an amazing/disturbing aesthetic.

Puzzles are of the basic variety; with a few pixel hunting parts for good measure.

The game always pushes you forward with locked doors and disappearing rooms; making sure that the experience is kept as linear as possible. Miss a piece of lore, and your only option is to reload the game or replay it, but given the linearity, I don’t see that happening too often.

Then there are the technical issues to discuss. I noticed some weird framerate skipping while events loaded up, and the game has that “janky” movement seen in Amnesia. It’s hard to describe it, but it felt like I was dragging my character around from room to room; to the point where I started to get a slight headache from the motion like with Amnesia.

It felt like the developers were trying to go with a combination of Amnesia’s horror styling and Gone Home’s exploration and discover the plot on your own, but the two don’t work combined. Forcing the player onto a single path means that you can’t get a sense of exploration, and too much of the horror is walking around waiting for a jumpscare to pop up.

With Gone Home, while there was an intended path to go through, the gamespace was wide enough that you could take your time and explore the various rooms and be rewarded with more tidbits about what happened and fleshed out the plot. 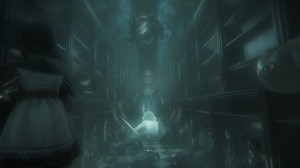 The surreal imagery is great, but your actual interactions with it is limited to a few basic options

While the jumpscares as usual did make me jump the first time, I eventually hit that point of boredom that I had with Amnesia.

It didn’t help by the fact that the times that I intentionally tried to go the wrong way to explore, it turned out I went the right way and the door back locked behind me.

As a point of reference, it took me just about 2 hours to finish the game, while doing my best to take my time and look around.

For people looking for the next great horror game, Layers of Fear is definitely not it. The game tells an interesting story and the visual effects were great, but that makes it more of a narrative adventure rather than a proper horror title. For fans of a good story and enjoyed the “discover as you go,” plot of Gone Home, Layers of Fear is a good companion game, but it’s not a masterpiece for the horror genre.