Among the Sleep — Dreamtime

Among the Sleep was one of many kickstarted titles that wanted to do something different. Its pitch: Develop a horror game with a two year old protagonist. With the game released and one piece of DLC done, Among the Sleep is an interesting ride which unfortunately for me falls into Amnesia territory.

The story of Among the Sleep is that you play as a two year old who on his 2nd birthday gets a teddy bear. That night he wakes up to a nightmare with his mother missing and the house distorted into some strange place. Your mission is to explore the new surroundings to find your mother with the help of your teddy bear.

From an aesthetic standpoint, Among the Sleep is amazing. I’m a sucker for games that do scale and perspective in interesting ways, see also Toy Commander and Shadow of the Colossus. The entire game is designed around the point of view of a two year old with normal objects stretched and everything distorted. For instance you can’t read any text because you don’t know how to read and write yet. 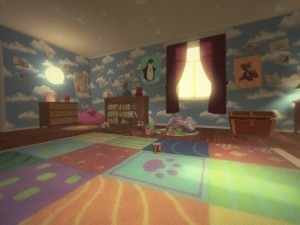 Puzzle solving is all about getting around obstacles and opening doors. The most common puzzle is figuring how to get high enough to turn the door knob to open the door. As the game goes on you will encounter monsters that will come after you.

But the game clues you in pretty heavily for when they are nearby and you can hide.  I also have to call out the game’s story as it does deal with some surprisingly dark themes through the eyes of a two year old. There is no blood or cursing but don’t expect this to make your time as a toddler feel warm and fuzzy.

Unfortunately the biggest problem with Among the Sleep is its length and the fact that you don’t have much to do as a two year old.

The problems with Among the Sleep are both technical and gameplay related. First on the technical side, I had the game glitch out a few times and I fell through the world and had to restart. Save points are generous so you don’t have to worry about losing too much progress.

But the main issue with the game is that it is very short and you can probably finish it in about an hour, two hours tops. The entire game is on rails despite the puzzle solving and it’s very hard to get loss. Unlike Gone Home which lets you explore to your heart’s content, Among the Sleep locks you to a specific path without any real means of exploration. You can find drawings to help spell out the story but nothing along the same degrees as Gone Home. 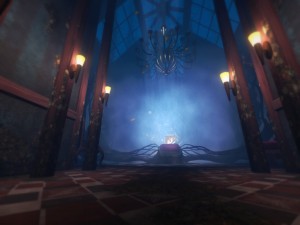 As the game goes on, the dream aesthetic continues to impress with the varied surroundings.

What’s funny is how Among the Sleep is so short for a horror game and Alien Isolation is considered to be too long. Proper pacing is one of the hardest elements to get right in any game and is a very tough subject.

A part of me feels that Among the Sleep ended at the right time before things got boring, but the $20 price tag may dissuade you from such a short experience.

While there isn’t much to talk about with Among the Sleep, it is still an impressive first game and an example of the positive side of Kickstarter and crowd-funding for getting this game made in the first place.