A post on Quarter to Three talking about the procedural generating runner game: Race The Sun caught my eye a few weeks ago. The developers who not only had a successful kickstarter but also were trying to get on Steam Green light were having trouble.

With the recent Not on Steam indie sale, I decided to check it out and see if a developer could take one of the simplest game designs and elevate it. And from my time spent, while the developers have had an uphill battle, I think they’re on the right path.

First off, for people who don’t know what a runner is. The runner genre is a basic genre usually seen as flash and mobile games; where the object is simply to keep the character from crashing, falling, dying, etc. As far as the issue of cloning goes with game design, it is one of the most cloned genres currently in the industry. Heck, my first unity game project I’m working on is to recreate a runner game.

And as far as basic gameplay goes, Race the Sun adheres to the same principal. Your solar powered ship flies along a minimalistic world and it’s your job to keep it from crashing. You need the sun to keep it powered and must avoid the shadows as well as a myriad of obstacles.

As you fly along, blue powerups called Tris can be picked up for points. The world itself is procedurally generated daily along with a leader board to go with each day’s world.

And that’s the gist of the gameplay and if that was all there was, Race the Sun wouldn’t have attracted much attention. But the game does offer more than your usual runner.

There are 25 levels of progression in Race the Sun which unlock new powerups, modes and equipment you can attach to your ship for a bonus. Powerups are the real game changer and will allow you to increase your chances of getting further in the game. 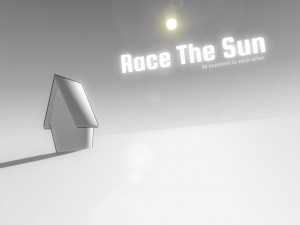 The minimalist art style gives the game a stylized feel to help separate it from other runners.

To level up, you’ll have to complete challenges which you can view after a race or from the pause menu. You’ll only ever have three challenges active at one time, a one point, two point and three point challenge of escalating difficulty.

Complete a challenge and you’ll be awarded the respective points and a new challenge will take the completed one’s space.

Race the Sun also comes up with a world modeling tool, allowing players to set up their own patterns, objects, events and more. These worlds can be uploaded and downloaded into your game which can appear in the form of portals (which are one of the unlocks via the progression system.)

As you can see, Race the Sun does a lot more than the basic runners you would see on a flash site but one big question remains: Is it worth its $10 price tag?

I love the art style for Race the Sun and the progression, modeling tools and ranking puts it above any other runner I’ve played. But at the end of the day no matter what they add to the game, there are dozens if not hundreds of games like it for cheaper or even free.

And that’s the problem that I have with recommending Race the Sun and what the developers talked about in the post above. While the game clearly elevates the runner genre to a new level, but is that really worth $10 or the price of a regular indie game?

Since Game-Wisdom is about analyzing game design, I’ve been able to avoid bringing the monetary cost of a game into the equation with only one exception before: Super House of Deadly Ninjas and with that game I didn’t feel that the gameplay at the time was worth what they were asking. 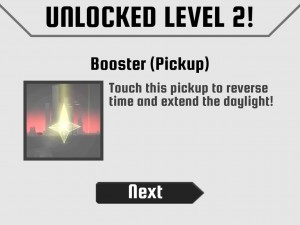 Leveling up via challenges, unlocks new content and improvements to keep you coming back.

With Race the Sun, the $10 price tag for a runner does feel on the high side and I had the same feeling about the Bit.Trip.Runner series. While the developers have done a commendable job with elevating the genre, it’s still one of the most basic genres around.

That’s why I wanted to get this analysis up as quickly as possible as it is part of the Not on Steam sale I posted above for $5. At that price, it’s far easier to recommend Race the Sun and hopefully now the game has been green lit and will appear on Steam, it will get a daily sale to attract people to it.

With Race the Sun, the developers have made an incredibly polished runner while pushing the simple mechanics as far as they could go. Ultimately it’s the consumer who decides how much a game is worth and I do hope that the developers will get rewarded for their efforts.