Playing through Abyss Odyssey, the latest game from Ace Team has left me cold. The developers touted a combat system akin to fighting games but from what I’ve seen, what they have doesn’t come close. The art of making not just a fighting game but one that can stand up at a tournament like EVO requires a special eye to detail and one that a lot of designers don’t have.

The Feel of Fighting:

Feel is one of those words that it’s hard to accurately explain it to someone new. Even though I’m not a competitive gamer, I’ve played and watched enough fighting games to see how the best ones have a great feel to them.

Feel in this definition refers to several qualities of the game mechanics, the first of which is responsiveness. Good fighting game design relies on very responsive controls to the point that the character should react almost as fast as the person inputting the commands. Watch any competitive level fighting game footage and you can see how quick these characters move in the hands of an expert.

It’s almost a 1:1 ratio of input to response and is required for the next part of how feel works: transitions. Transitions are the act of stringing moves together to create combos. This can be done either by hard coding combos or by having the character be so responsive that the player can figure out the best way to string them together themselves.

Again, watch any button intensive fighting game like Street Fighter or Injustice and see how the player can string combos and special attacks together to create extended combos. It really is fantastic to watch someone play at the competitive level and be able to pull off these attacks. This is one of the reasons why I feel like E-Sports at this level should be considered a sporting event as the time and dexterity required to master these moves is incredible. 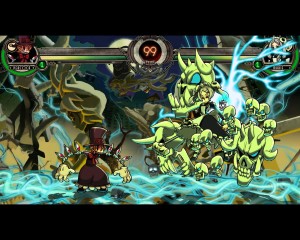 When everything works right, you end up with a responsive character and move set that allows a creative player to start experimenting with attacks to come up with their own combos.

Speaking of attacks and combos, the next step for a good fighting game and perhaps the hardest to pull off is adding a technical level of gameplay.

Technical maneuvers refer to advanced play in fighting games and where experts begin to break the game down. This is where the concepts of punishes, playing footies, analyzing frames and more come in.

This is the level of play that is pretty much reserved for the hardcore or professional part of your audience. A casual fan is not going to understand how to analyze frames or the concept of frame canceling. Yet if you want your fighting game to not be looked down on by the hardcore, it needs to have these mechanics in place. Again, this is something that is hard to explain through text as we are getting into some very advanced concepts. The best thing would be to watch any footage of EVO finals on games like Street Fighter, Smash Brothers and so on.

What’s very interesting is that Smash Brothers was not designed at all from a competitive point of view and it was simply a lightning strikes moment that the hardcore audience took to it for tournaments. And now Nintendo is sort of stuck between a rock and a hard place of making a casual affair while still having the appeal to the hardcore community. 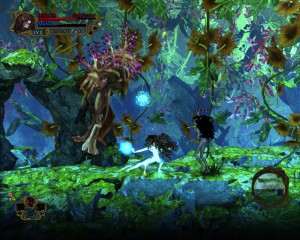 Abyss Odyssey tries to capture the fighting game spirit, but lacks advanced moves and fluidity and comes off as being clunky

I wrote a post a year or so ago talking about what kind of design that competitive gamers like so I won’t repeat myself on mechanics and design philosophy.

But the point to understand is that there has to be more meat to the experience than just simple combos to say that your game has fighting design in it.

There needs to be a combination of offensive and defensive maneuvers for the player to make use of. This is where Abyss Odyssey slips up as it has the foundation for fighting game design: Attacks that can be chained together and special maneuvers, but lacks that next step towards technical play.

Technical play is what really separates the fighting games that are just okay, from the ones that the competitive crowd will lean towards and use for tournaments.

Because technical play is the deciding factor between casual and hardcore play, it’s important to have some kind of tutorial or ways for players to learn this that aren’t a part of the competitive crowd. Skullgirls featured a great tutorial that went through all the mechanics, systems, special moves and combos for all the different characters.

From what I’ve heard, Killer Instinct also has a great learning mode for understanding frame canceling and higher level play. This is a far cry from earlier fighting games which left you to figure out combos and special moves to yourself. And it’s great that fighting game developers are designing them with intent to grow and cultivate a fan base instead of being just for the hardcore.

Good fighting game design like action games requires systems for all skill levels. The devil is in the details as technical play needs to be properly understood and balanced. You don’t want to hit someone over the head with it but they should still be able to grow to understand it as they increase in skill.

I hate to keep harping on this, but this is one of those topics where you really need to watch footage just as much as reading about it. Even if you have played fighting games, it really is different examining competitive level play and should be required viewing for anyone interested in making a fighting game.

( For a more detailed look at technical play, here is a followup post I wrote on the subject)