Pinball in its many forms is one of the oldest games still being played despite the downward turn of the arcade industry. Like playing classic video games, it can be both difficult and expensive to recapture.

Fortunately, Farsight Studios: Makers of The Pinball Arcade have been restoring and digitizing some of the most popular pinball tables around. With their third kickstarter almost wrapped up for the T2 pinball rights, I wanted to talk with them about the work that goes into The Pinball Arcade.

The following interview was done with Bobby King, VP of Product Development and lead designer of the Pinball Arcade at Farsight Studios

1. Farsight has made a variety of games over the years before switching to pinball in the last decade. What led to the change in focus?

Our focus on pinball these past few years has been largely due to FarSight’s long standing goal to self-publish.  When you’ve got the chance to acquire the licenses needed to develop and publish the greatest pinball video game ever made, you have to go for it, right?

We’ve been waiting for digital distribution to get to the point where a publisher doesn’t need to manufacture and distribute physical goods for a game to be successful for over a decade – and now that it’s here, we thought that our passion for pinball, our licenses and the quality of our pinball engine made it the perfect game to go all-in on.

2. Pinball design has evolved over the decades and dramatically since the early days of the genre. Does your team have a particular period of pinball that is their favorite?

A lot of design innovation occurred from the late 70s through 2000.  Most of the FarSight crew thoroughly enjoys all of our mid-90s tables.  If I had to pick a few favorites that pretty much everyone loves, I’d have to include Medieval Madness, Attack from Mars, Theater of Magic, and Tales of the Arabian Nights.

That said we’ve also played Taxi and Bride of PinBot to death.  Plus, Black Knight and Firepower are favorites of a couple guys.  There’s quite a few guys who don’t like anything much older than 1980.  But other than that, and since all of the tables we have are pretty much classics, it’s hard to pick only one period.

3. Pinball, like the video game industry originated in the arcades and made major leaps and bounds in popularity in the 80s and 90s. Even with the decline of the arcades, pinball still has a strong following.

In your opinion what makes pinball in a sense timeless for people like you, me and the fans that continue to enjoy it?

There’s nothing quite like playing a real pinball machine.  It’s unique as well as fun.  The real mechanical experience of a machine that is fully working and setup and balanced was, and always will be, a great entertainment value for everyone. 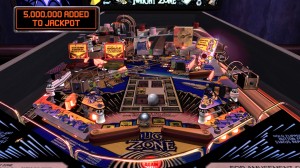 The Twilight Zone table is considered to be one of the most complicated tables ever made and was able to be digitized thanks to kickstarter.

I think this is partially because pinball is super simple at the most basic newbie level – just keep the ball alive and enjoy.

The great presentation and deep gameplay that keeps bringing players back who are trying to master the table is just as important, though.

4. With the latest kickstarter almost done for the T2 pinball game rights and Farsight’s previous projects for The Twilight Zone and Star Trek TNG, your company has had a chance to examine what fans considered to be some of the best pinball tables ever made.

In your opinion, what elements distinguish a table that is merely good, from the ones that are considered the top ranking?

The table’s that become classics are all great designs.  The geometry is crucial for creating a fast flowing experience.  In addition, classic top ranking tables are all either extremely entertaining, challenging to master in a fair way that becomes addicting, full of innovation / originality or often all three!

5. One of the most impressive aspects about Farsight is the level of dedication to restoring and digitizing classic pinball tables. How long is the usual turnaround time from getting a new table to having it available for download?

Once we start working on it, it takes a few months to get a table to the point that we can ship it on all of the platforms we support.

We’d prefer to evolve the Pinball Arcade into the best game we can so that players don’t have to start over.

7. One of the touted features that are a part of Farsight’s work is translating the programming from the respective cabinet into whatever device is running the pinball arcade. For the people who aren’t familiar with the operation of a table, what is the importance of such a feature?

ROM emulation gives us 100% accurate rules, light sequences, DMD/score displays, music/sound effects etc.  Without ROM emulation, DMD tables would be impossible to produce in any way that made business sense.  It would literally take years to re-create programmatically to the same quality level without using the table ROM. 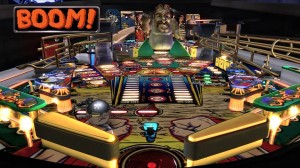 When we did the Gottlieb collection of the Pinball Hall of Fame, Tee’d Off took 3 times longer than any other table to code and it’s full of mistakes, plus we had to fake the DMD presentation and the light sequencing isn’t close to being perfect.

8. Speaking of programming, another major aspect of translating pinball from the arcade to digital would be ball physics. Can you talk briefly about the work that goes into accurately modeling pinball tables?

Well, we’re on our third revision of the pinball physics – and I could go on and on with details.  We have the ability to tune pretty much everything on the table to be very, very close to the real world machine.

The collision modeling is very important and it’s very important for both the physics and collision mesh to work together.  Once everything is playing OK, it still requires a lot of back and forth and some experimentation to fine-tune each table so that it plays just like the real thing.

9. This next question is one that my friends who love pinball ask whenever we talk about pinball games and Farsight in general. Given your company’s extensive knowledge on pinball design, has Farsight ever thought about creating original tables to put into The Pinball Arcade?

Yep.  Stay tuned for more information in the upcoming months.  We have some exciting plans regarding this!

10. Lastly, as with the game industry there is a lot of history behind the pinball industry and evolution of design. For the fans who are interested in learning more about pinball, are there any resources that you can recommend for them to check out?

There are also great videos available that show the history of pinball design.  Fans should definitely check out The History of Pinball which we sell through our game as well as the documentary Special When Lit.

Thanks for taking the time to answer these questions and good luck with the kickstarter and upcoming release of The Pinball Arcade on Steam.

The T2 kickstarter is over at this point and Farsight is getting ready for their next one which is hinted at being for the Addams Family pinball rights.