The Indie market has grown considerably over the last decade and part of it has to do with the change in how games are being sold. We’ve gone from store shelves being a must to digital store fronts with infinite space for all the games available. This has lowered the barrier of entry for indie and AAA game designers as they are now able to put their games in front of millions of people without any of the fuss of the old days.

But the change in markets has also led to a change in how to sell games and something a lot of indie developers and even older developers need to learn about.

The Art of the Sale:

In the old days of the industry, selling a game consisted of advertisements and the good review in a magazine. As without them, no one would know that your game even existed unless they happened to spy it on a store shelf. Developers today now have several tools at their disposal when it comes to getting someone to buy their game.

The first and most popular is the sale: Whether it’s on their website, part of the humble bundle, GOG, Steam and so on. Sales were one of the driving forces of how the digital market took off and is something that no developer can ignore.

While many developers and publishers have bemoaned how this is driving down the value of games and is something I agree with, consumers have decided that they want sales. Ultimately the people spending the money will dictate the value of your game. As we’ve talked about, a game’s consumer base will include the people who wait for sales as well as the hardcore faithful — the men and women who will buy your game day one at full price.

Developers like Jason Rohrer have spoken out saying that they will never lower the cost of their game as they feel that it devalues both the game itself and the fans who bought it at full price. And on one hand that is fair, however on the other hand they are fighting a losing battle with consumers. Keeping your game at full price will limit its marketability and even niche developers like Strategy First have come around and have had discounts on their grand strategy games. 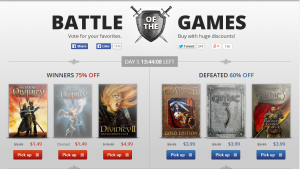 Sales come in all shapes and sizes and are meant to be attractive to people outside of the core fanbase.

One area that has become a necessary evil for most designers is having to rely on digital stores as opposed to selling on their own site.

For many people the simple convenience of having your games tied to one or two specific libraries is more important than playing a great game that they have to hunt down their CD keys for. While Steam is still the 800 pound Gorilla, sites like GOG, HumbleStore and others have become major players and are viable alternatives to Steam.

Another option developers have to get interest in their games are incentives– achievements, steam cards, items for other games, etc. Now I know what some of you are thinking right now: Shouldn’t playing the game be value enough? And the answer to that is yes… and no.

The value of a game or any product is determined by the consumers and you will of course have the people who play your game on the value of the design or your name alone. But expanding that audience is where incentives come in to sweeten the deal. We see this with other products: Free toys in cereal, gift cards for signing up, discounts and so on.

The point of incentives is to increase the value of your game, with or without the need of lowering the cost or being that initial hook that pulls people in so that they will become fans and buy your games on name alone next time. Being able to tie your game to another brand through incentives like Steam cards or Team Fortress 2 items is a very powerful motivator. You already have the person invested in the brand and now associating your game to that popular brand will give it more notoriety.

When we spoke with Keith Nemitz from Mousechief, he talked about how he was offered the chance to have steam cards from the get-go for 7 Grand Steps and he turned it down. Then after seeing the impact they had, he quickly changed his mind and added them with an update.

Exclusive items have become a big deal for a lot of gamers. As we’ve talked about on previous casts, both Ken and Lorson love Team Fortress 2 and the prospect of getting exclusive hats or items from other games is an offer that they can’t pass up. 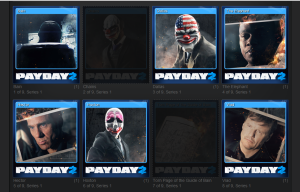 Steam trading cards have become the latest craze for gamers besides achievements. But this time there is real money attached.

In an interesting move, Blizzard has been adopting this strategy by providing an almost meta-connection between their big hits.

Pre-ordering or playing one game may provide incentives and bonuses in another. Such as having Starcraft 2 profile pics in the Diablo 3 CE or unlocking a unique mount in WOW from playing Hearthstone.

This in turn adds more value for someone who plays all their games and may convince someone to try one of Blizzard’s other games in hopes of getting something for the one they normally play.

For many older developers, the idea of these incentives convincing people to buy their games must be a weird feeling. But times have changed and these extras can mean value to gamers, either as items they can use in another game or something they can sell thanks to the Steam marketplace. And ignoring them due to principle is not a smart move. It doesn’t take much to design a set of Steam trading cards and the addition of them can give you sales from card hunters.

Wrapping up this series, I have one more mistake developers make and it’s one that has gotten on my nerves a few times.

Shining a Light on The Darkest Dungeon (Part 1)