The Call of Juarez series has been an interesting one in the fact that the developers have changed the tone of it as the series went on. Starting out as your standard western story, the series moved to the present with a game that many people considered extremely racist.

With Call of Juarez: Gunslinger, the developers have brought things back to the old west with a new tale and take on the gameplay.

Gunslinger really takes place in the 20th century as master bounty hunter Silas Greaves is regaling the patrons of a saloon with his exploits. Each level of the game is about one of his stories that play out as he is telling the story in the bar.

What’s interesting from a storytelling perspective is that Silas is an unreliable narrator and the game space will change based on how he’s telling the story and altering it midway. From paths appearing, enemies that change and even the game pausing while he answers some questions. One level is the same situation repeated from three angles based on who was telling the story at the time.

The gameplay is your standard FPS design with a few key differences. Killing enemies with headshots or other modifiers will give the player experience which can be put into three different skill trees. While the game does feature regenerating health, you can’t take a lot of damage especially on the higher difficulty levels. 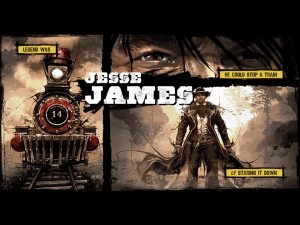 The game has a surprising amount of style along with a classic western soundtrack.

To aid the player, there are two abilities that the player can call on. Concentration, representing by the gun on screen lets the player enter slow mo and is able to avoid bullets easier and line up quick shots.

Another meter fills up as you kill that allows you to recover your health by dodging the bullet that would have killed you.

Occasionally, you’ll have a quick draw duel with one of the many famous cowboys that appear in the game. During these sections you need to keep your crosshair over the person while watching where your hand is over your revolver. Finally you have to decide whether to draw first or wait for what’s considered an honorable kill and bonus experience.

Besides the story, you can also play arcade mode where you are trying to beat a high score or nothing but quick draw duels.

Overall my main problem with Gunslinger is that the game is pretty much one note after your first duel, there are no other real surprises or gameplay changes. The unreliable narrator hook of the story was a great touch that does become more of a factor as the game went on. However, it would have been interesting to see more ways for this to impact the gameplay.

For example, if you could make the game easier or harder by manipulating the story and tie that into a rewards system. 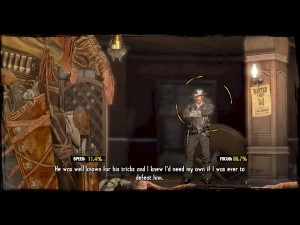 The duels are pretty fun, but a bit repetitive once you figure out the gameplay.

Graphically, the game makes use of a similar cell shading technique seen in the Borderlands series, to give the game a washed out or almost comic book like aesthetic to it.

However while Gearbox with Borderlands made sure to fill the world with a variety of colors, Call of Juarez mainly sticks to dull colors. This made it very easy for the enemies to blend into the background and hard to see them.

In the end, Call of Juarez: Gunslinger reminds me of Spec Ops: The Line — It’s a unique game where the whole is greater than the sum of its parts. I do think that the developers have struck a chord with Gunslinger which I hope they continue this with future games instead of radically changing things again.