Since the days of Castlevania: Symphony of the Night brought us the “metroidvania” genre; it has become popular among the Indie community, allowing someone to elevate the 2D platformer genre into one with adventure and even RPG like gameplay. Today’s game: Valids Story: Abyssal City is another take on it and is a lesson where there can be too much of a good thing.

The story is a pretty interesting one, dealing with ancient gods, eternal wars, angels and demons and the remaining human survivors. The player finds themselves stuck in an underwater city where angels and demons fight each other with the humans caught in the crossfire.

The first thing you’ll find in Valdis Story is that there is a lot going on under the hood in terms of mechanics. You start off between choosing from one of two characters each with a different skill tree, equipment, attacks and spells to use. Killing enemies will net you experience which on level up, you can apply a point to your stats and a point to one of your three skill trees.

During combat you can block, use two different attack buttons, summon a friend, spells and you’ll unlock more abilities like an evade. As in a metroidvania styled game, prepare to find oodles of chests behind doors, over chasms and other hard to reach areas just begging for you to return with the desired ability to obtain them.

One challenge that the game likes to use often are timed switches, requiring you to get back to the opened door before time runs out to grab a chest or important item. You can also collect items off of defeated enemies that can be traded in at shops for new gear or permanent upgrades.

The enemy variety is pretty good with them split between the different armies each with different attack patterns to get around. Speaking of attack patterns, the developers of Valdis Story apparently are fans of the classic game Gunstar Heroes as there are a lot of bosses in the game. Within the first 20 minutes of play, I fought three different bosses of varying sizes, patterns and design. 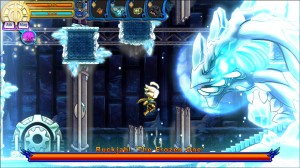 Bosses come in all shapes and sizes, requiring vastly different tactics to take down.

In an interesting touch, you are graded on every boss fight for how well you fought based on how fast you kill it, how much damage you took and whether or not you had to use a revive potion.

The higher grades actually reward you with permanent stat bonuses along with experience. Throw in multiple difficulty levels and achievements and you got one of the most stuffed games of this genre that I’ve seen.

However for all the mechanics and systems built for Valdis Story, it’s the foundation that hurts the game somewhat for me.

The biggest issue with Valid Story comes down to the control system. First is that for a 2d metroidvania game, it is very button heavy as every button on the gamepad is used to some effect.  But even with every button mapped to a function, the game still requires shortcuts and additional button combos.

Holding the right trigger down and you have three spells mapped to the left, down and up directions and a fourth one that is used in the air. Performing a dash requires you to first prime it by pressing down then quickly pressing either to the left or right.

For having such a focus on combat with combos and the two button attack system, combat as a whole was lacking. From what I played, there wasn’t a way to chain combos between the two attack buttons, nor were there any special attacks or combos like there were in Dust: an Elysian Tale, which is another metroidvania styled indie game.

Movement and general combat was very floaty and it felt hard to control my character properly. I had cases where attacking would send my character off the ledge they were on or times where the dash would not trigger or trigger without me wanting it to.

Speaking of the dash, I found it horribly unreliable for its main use in combat: Getting around blocks. Larger enemies can defend themselves from all attacks from the front, requiring you to quickly dash behind them and attack their back. But the unreliable dash made this incredibly frustrating. It would have been better to just map the dash to requiring the block button in some fashion to keep their functionality together.

Adding frustration is that the dash’s recharge time varies when you are in combat and out of it. Leaving me with plenty of cases where the dash would go off when I didn’t want it to or not happen and I had no way to get around an enemy to attack it, giving it free hits. 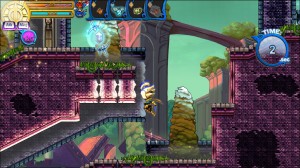 Getting through timed sections show off the problems with the floaty controls.

Trying to hit enemies in the air was its own annoyance and there was no reliable way to aim spells.

Many enemies will also attack you while you’re in mid air and the block stops forward momentum, making it a pain to cross gaps to reach ranged enemies.

The developers also made the same mistake that befell La-Mulana with its level design and progression structure: Mistaking no information as being clever. You’ll run into shops early on without any explanation of their uses or why you should be collecting items.  The game overloads you with stats, variable bonuses for equipment, spell effects and more without telling you their uses.

One moment of frustration came when after a boss fight I was stuck in the room with no way out. It turned out that the boss apparently rewarded me a spell that created platforms but the game just didn’t happen to tell me.

It’s a shame that Valids Story had structural problems with its control system as there was just so much to explore and do in the game. If you can look past the problems, Valids Story is a very capable game and a great example of the metroidvania genre. However for me, every time I stopped playing it was because I reached my limit of frustration having to fight the mechanics and the controls at play.

It’s important to remember that no matter how much you build upon your design and add features, if the core mechanics don’t work properly, their problems can ripple out to affect the entire experience.