Far Cry 3 was considered one of the best games of last year that I still haven’t played yet, continuing the series’ trademark of throwing the player into a dangerous situation and forcing them to fight their way out. With Far Cry 3 Blood Dragon, the developers have a new situation for you: a 80s action film.

You’re the Best… Around

Far Cry 3 Blood Dragon has nothing story-related to do with the original Far Cry 3.  Taking place in what has been described as: “the far distant future of 2007″, the world is on the brink of destruction. A military commander has gone rogue with an army of cyber-commandos and it’s up to mark 4 cyber- commando Rex “Power” Colt to save the world.

Everything about Blood Dragon screams 80s movie, from VHS tracking to synthesized music that sounds at home in The Terminator or The Thing. Rex was voiced by actor: Michael Biehn who has been in numerous movies including Terminator and Aliens. Michael definitely adds a lot to the 80s vibe, doing his best Snake Plissken impersonation.

Besides 80s movies, Blood Dragon also has several video game related throwbacks such as 8-bit styled cut-scenes and an assortment of less than helpful tutorial screens. 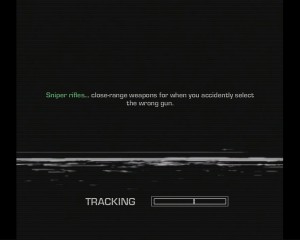 Truer words have never been spoken.

Moving to the actual gameplay, Blood Dragon doesn’t add a whole lot to the formula.

You’ll start the game already pretty powerful with a full assortment of guns and the ability to run fast and not get damage by falling.

Completing missions, finding collectibles and taking over garrisons will unlock upgrades for your basic weapons.

The big difference compared to the original Far Cry 3 was the inclusion of the titled: Blood Dragons. These giant lizards with laser shooting eyes roamed the island and were attracted by noise and cyber hearts. The hearts could be taken out of dead cyber commando chests and could be thrown to lure them to a spot.

The Dragons outside of a few story related moments could be largely ignored. Although watching a group of dragons take on a garrison was pretty cool.

Ultimately, Blood Dragon was a case where the whole was greater than the sum of its parts, however how much greater depends on you. Blood Dragon‘s gameplay was pretty basic with not too many enemy types and every mission having the same solution: go somewhere and kill everyone. Stealth was still a viable option and in some cases more powerful than just running around shooting everyone. 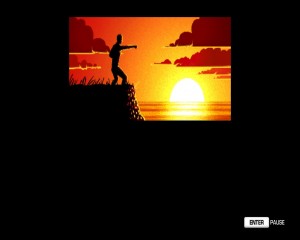 Spoiler Alert: You don’t get to sweep the leg.

For fans of Far Cry 3  looking for radical new gameplay options, you won’t find any here outside of the blood dragons.

The length of the game was also on the short side with the story missions taking a few hours to beat, less if you completely ignore garrison and side missions.

The humor of the game will no doubt be polarizing, due to the as-mentioned 80s throwbacks. If the idea of having a training montage for the sake of having one doesn’t make you laugh, the humor may fall flat for you. The video game related puns outside of the tutorial and hint screens were hit or miss for me.

Far Cry 3 Blood Dragon was one of those ideas that sounded crazy (spoiler alert, it was) but it somehow managed to come together. A few weeks ago I reviewed Retro City Rampage and it felt like it adhered too much to the decade and copied too many jokes and elements. Blood Dragon is better in my opinion as the developers took the jokes and themes and made it into something original but at the same time cliché.

With news that Blood Dragon has done well over what was expected, hopefully this is not the last we’ll see of Rex “Power” Colt, as who knows what the cyber future has in store for us.